Best Things to See and Do in Pittsburgh's Oakland Area

Oakland is the center of academia and healthcare in Pittsburgh and, furthermore, one of the Pittsburgh's major cultural centers.  Pittsburgh’s two largest universities call Oakland home as well as major hospitals and an abundance of museums, restaurants including many ethnic restaurants and stores.

Oakland was called by this name for the first time in 1839, because of the abundant oak trees found in this area.  Oakland’s development accelerated after the Great Fire of 1845 in downtown Pittsburgh.  While downtown Pittsburgh was the industrial center of the region,

Oakland developed as the academic center since the early 1900s.  This is still true today.  Oakland is dominated by students, is very walkable and has excellent bus connections.  While CMU (Carnegie Mellon University) on the outskirts of Oakland has its own campus, Pitt (University of Pittsburgh) is integrated into the city with many main building centered to the north and west of the Cathedral of Learning. 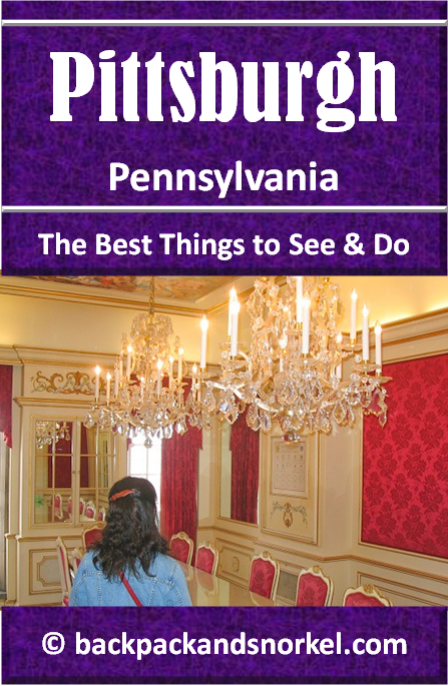 The Cathedral of Learning is Oakland’s most iconic building and listed in the National Register of Historic Places.  This 535ft (163m), 42-story Late Gothic Revival Cathedral belongs to the University of Pittsburgh which commissioned it in 1921.  Ground was broken in 1926 and the first class was held here in 1931 even though the formal dedication was not until 1937.

The building is a steel frame structure with Indiana limestone that contains more than 2,000 rooms and windows and functions primary as a classroom and administrative center from Pitt.

The first 4 floors contain the massive gothic “Commons Room” that looks like the inside of a cathedral, but it is used as a general study area.  Since the Cathedral of Learning was never intended to be used as a religious building, you will not find any Christian symbols.

The Commons Room, a gift of Andrew Mellon, is called one of the "great architectural fantasies of the twentieth century" and its architect, Charles Klauder, considered it to be his greatest achievement.

All arches are self-supporting without any steel supports, as it is the case with true Gothic architecture.  Guastavino acoustical tiles are used to reduce noise levels. 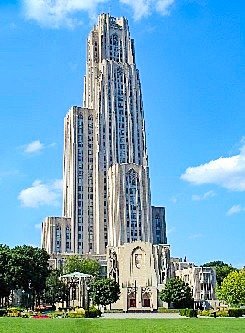 The Commons Room is ringed by three floors of classrooms.  On the first and third floors, are 31 “Nationality Rooms” which make the cathedral a popular tourist destination.  More about this a little further down in this article.

The “Nationality Rooms” are a series of 31 classrooms on the 1s and 3rd floor of the “Cathedral of Learning”.  The Nationality Room Program was founded in 1926 and immigrant communities from the Pittsburgh area were invited to decorate a classroom according to their heritage.  Design and construction was provided by the respective national room committees and the University provided the rooms and paid for the upkeep.  In most cases, much of the materials were imported and work performed by native craftsmen and artists.

Dedicated on July 8, 1938, the first four rooms were the German, Russian, Scottish, and Swedish Rooms, while the Philippine Room, dedicated in 2019, is currently the newest.  Four more rooms are being discussed.

Below are photos of some of the rooms.  These rooms are stunningly gorgeous and present a good overview of how schools have looked in those countries at a time prior to 1787, the University of Pittsburgh's founding year.  The French Room is the only exception as it depicts a classroom of the French Empire period in the early 19th century.

29 of the 31 classrooms are being used for lectures, while the Early American Room and the Syrian-Lebanon Room are only for display.

The classrooms are available for tours every day.  You can either join a guided tour (needs 2 week advanced notice) or do a self-guided tour.  There are very helpful audio tape players available for rent from the gift shop on the first floor.

When school is in session, then you can only tour the rooms that are not currently used for classes.  During weekends and school holidays, the rooms will be locked, and you can get the key from the gift shop.

I love the Nationality Rooms and strongly recommend visiting those if you have time. 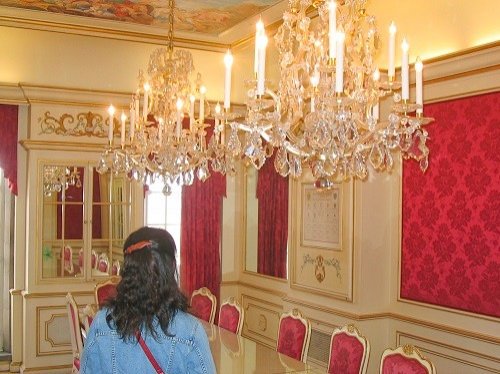 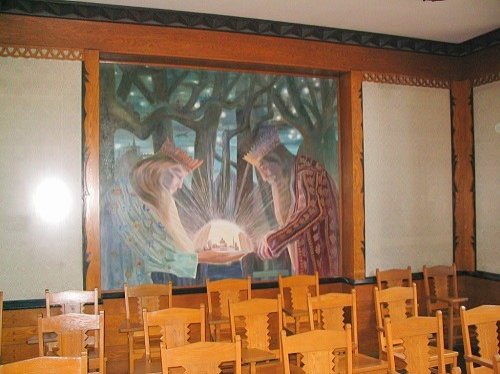 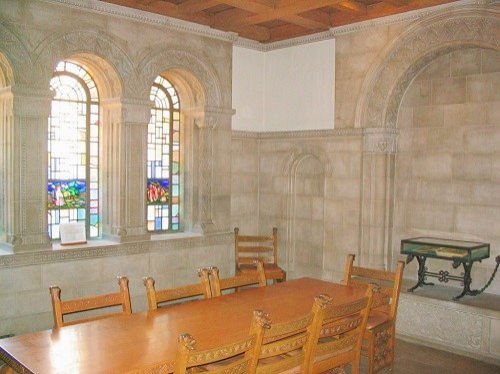 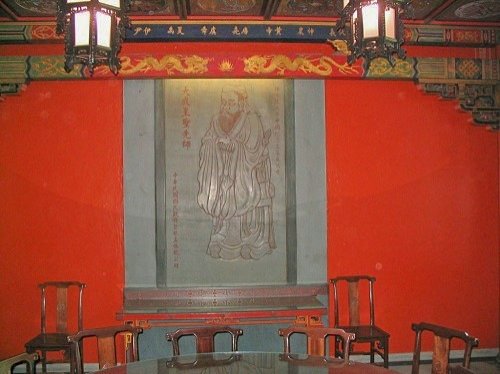 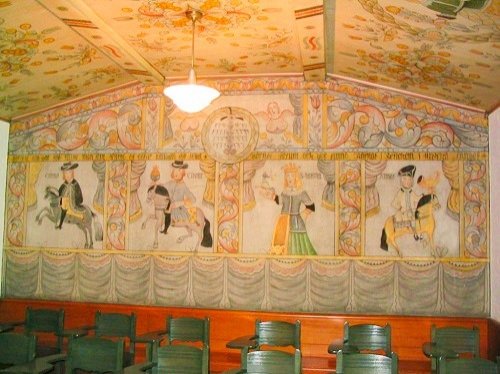 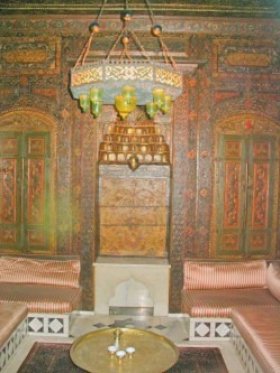 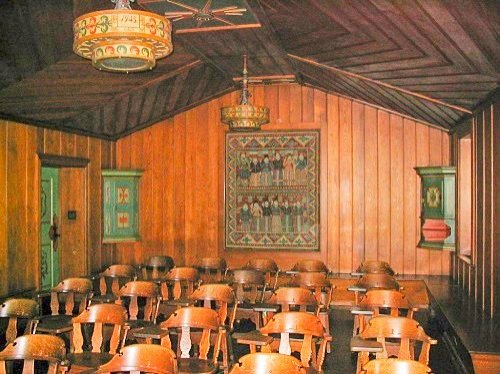 I have reviewed Primanti Brothers on the “Pittsburgh Food & Restaurants page.

Built in 1893, the “Phipps Conservatory and Botanical Gardens” is a historic landmark, listed on the National Register of Historic Places.  Steel and real estate magnate Henry Phipps, Jr. gave it as a gift to the City of Pittsburgh for the purpose to educate and entertain people with formal gardens and house various species of exotic plants.

The Phipps contains various indoor and outdoor gardens including a Tropical Forest Conservatory, an Orchid Room and a Desert Room, Japanese Courtyard Garden, a Children's Discovery Garden and an Aquatic Garden with two pools that are filled with tropical water plants and floating flora in summer.

During the year, decorations will change and you may find yourself visiting during the peak of the Spring, Summer, Fall or Winter Flower Show or when the Christmas decorations are up.

In addition to that, the Phipps also offers online classes in gardening, cooking and art. 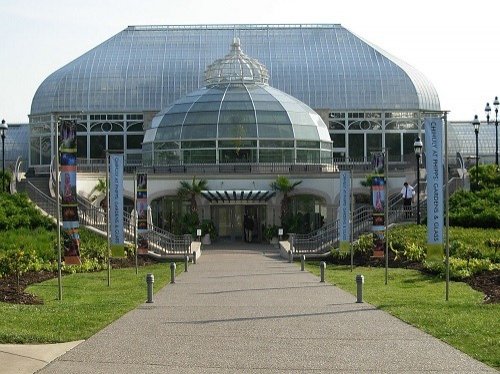 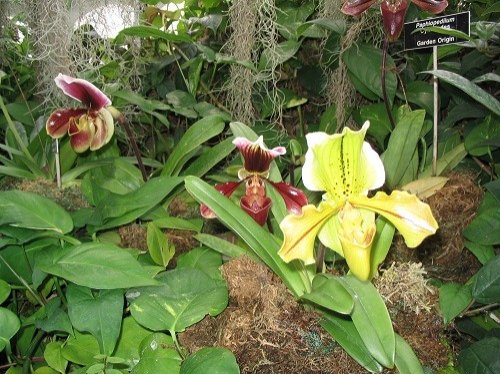 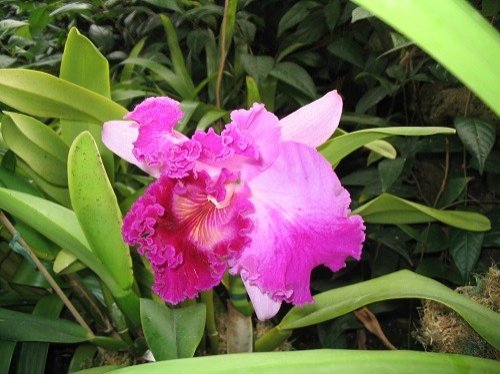 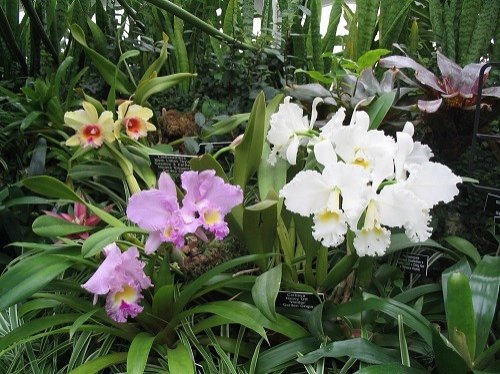 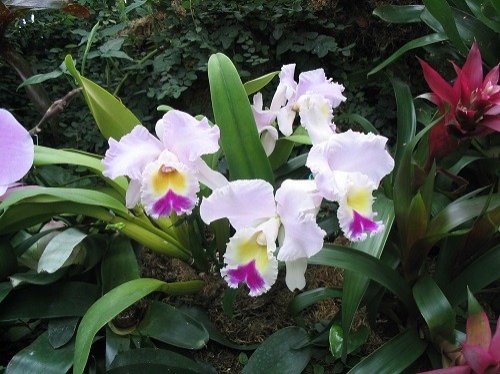 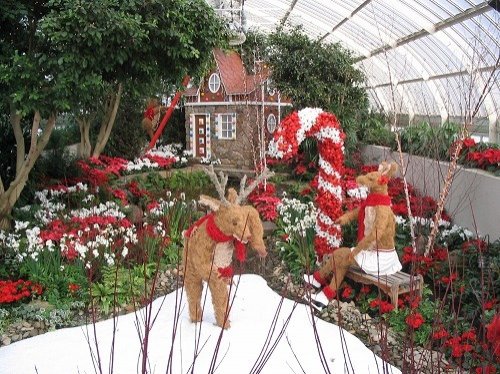 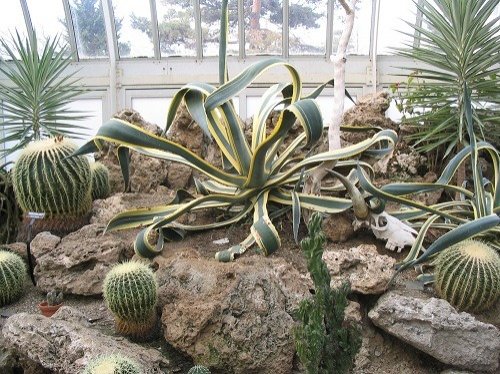 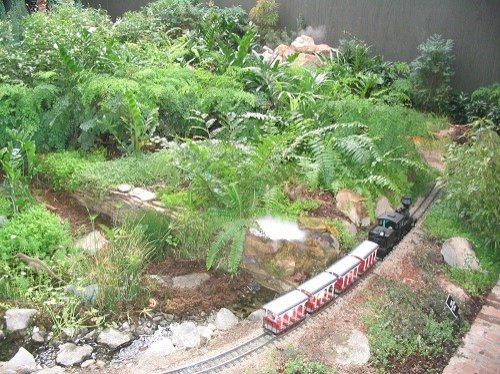 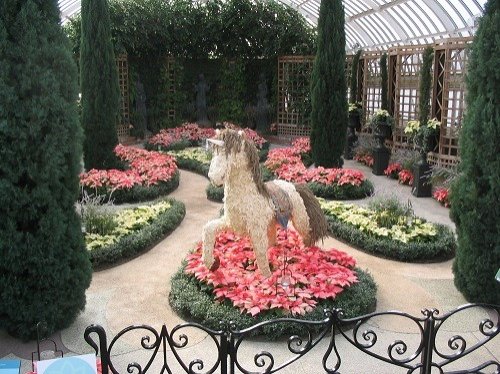 Heinz Memorial Chapel sits across the lawn from the Cathedral of Learning.  It belongs to the University of Pittsburgh and is a Historic Landmark.  Dedicated in 1938, it was a gift of Henry John Heinz, the founder of the H.J. Heinz Company, to honor his mother, Anna Margaretta Heinz.

Designed by Charles Klauder, who also designed the Cathedral of Learning , this neo-Gothic chapel makes extensive use of glass, which was typical of American academic and religious architecture in the early 1900s. 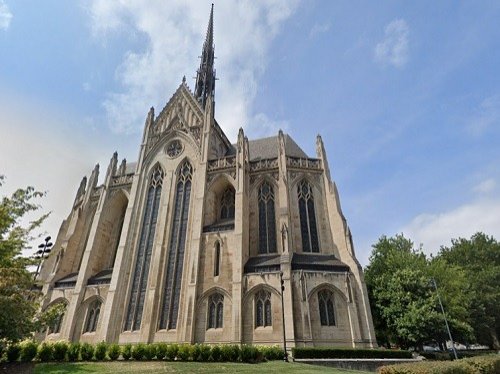 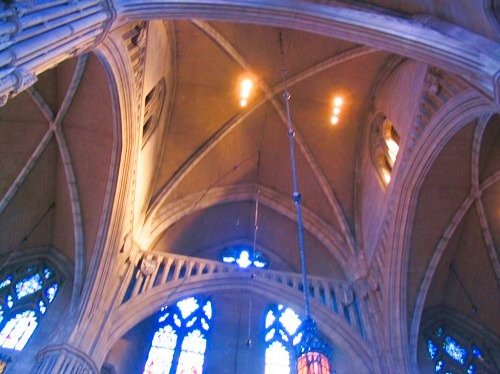 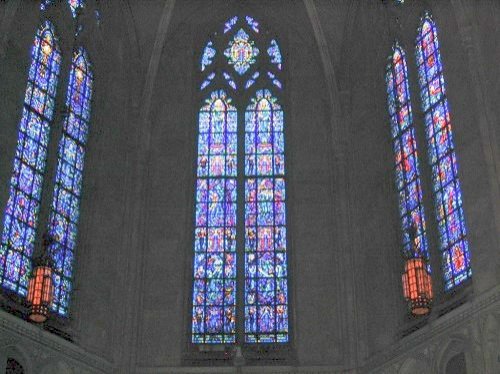 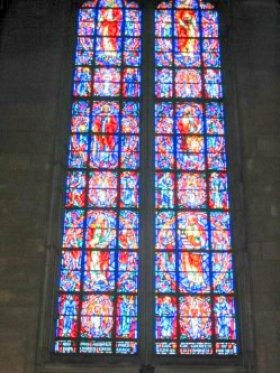 The University of Pittsburgh’s Log Cabin is located on Forbes Avenue next to the Cathedral of Learning and across the street from Dippy, the dinosaur in front of the Carnegie Museum of Natural History.

It serves as a landmark that symbolizes the university's origins on the 18th Century western frontier.

The current log cabin was relocated here from about 50 miles away for the University’s bicentennial in 1987.  It is estimated to date from the 1820s to 1830s.

The porch and chimney, however, are new additions.  Some original logs were replaced, and a new wood shingle roof as well as new doors and windows were installed.

For the first few years the log cabin served as a visitor information center and it currently stores salt for winter deicing for the Cathedral of Learning grounds maintenance staff. 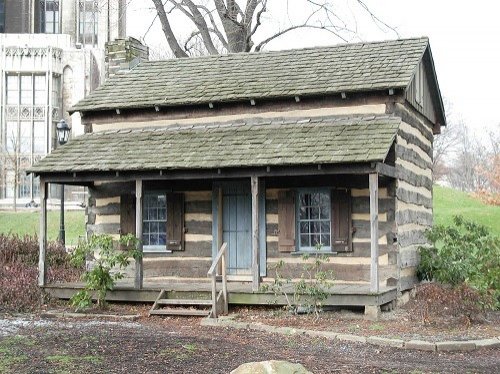 Photo by Piotrus, resized, the license is here.

The review of Schenley Park is here.

The review of Frick Park is here.

Stephen Collins Foster is known as "the father of American music" and "the most famous songwriter of the 19th century".  He was born in the Lawrenceville section of Pittsburgh in 1829 and he wrote more than 200 songs.  Some of his compositions are still popular today, like "Oh! Susanna" and "Old Folks at Home" – a modified version is Florida’s official state song.

The Stephen Collins Foster Memorial, located near the Cathedral of Learning, belongs to the University of Pittsburgh and it houses two theaters (Charity Randall Theatre and Henry Heymann Theatre) and museum that celebrates the life of Stephen Foster.

Like the Cathedral of Learning and the Heinz Memorial Chapel, the Stephen Foster Memorial was designed by Charles Klauder and it used Indiana limestone for the walls.

I have not visited the theaters, but the museum is definitely worth a visit if you are interested in traditional American music. 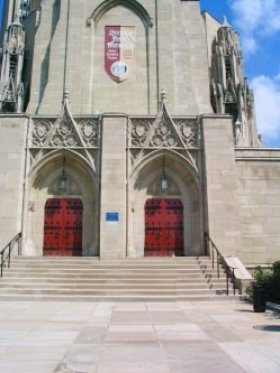 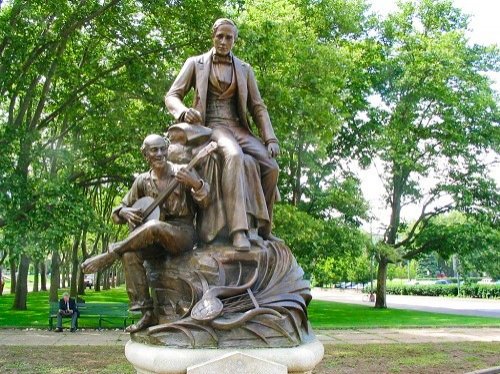 I have reviewed the Carnegie Museum of Natural History on the “Pittsburgh Museums” page.

I have reviewed the Carnegie Museum of Art in the “Pittsburgh Museums” page.

I have reviewed the Soldiers and Sailors Memorial Hall and Museum on the “Pittsburgh Museums” page.

I have reviewed The Frick on the “Pittsburgh Museums” page.