This Backpack and Snorkel Travel Guide (Dominica Purple Guide) provides information about the best things to do on a cruise to Dominica and ensures that you will be Making Memorable Moments on a relaxing vacation in Dominica.

Why you should visit Dominica

Discover the "Nature Isle of the Caribbean" with its mountainous rainforests, black sand beaches amd the world's second-largest hot spring.

Dominica is a mountainous island of volcanic origin in the Caribbean and it is nicknamed "Nature Isle of the Caribbean".  Even though spelled similarly to the Dominican Republic, the procounciation is very different.  It is "Domi-ni-ca" with an emphasis on "ni" and not "dominni-ca".
It is located between Guadeloupe and Martinique, the capital is Roseau, the population approx. 71,000 and the size approx. 290 square miles (750 km2).  The highest point is Morne Diablotins, at 4,747 ft (1,447 m).  English is the official language.

Dominica has a tropical rainforest climate with relatively constant temperatures throughout the year and a distinct rainly season.

This is one of Dominica's best and most acceessible and therefore most popular beaches.
Here are some photos:

Dominica was settled in the 5th century by the Arawaks and later the Caribs who called the island "Wai‘tu kubuli" (Tall is her body).
Columbus has passed the island on Sunday November 3, 1493 and named it Dominica (latin for Sunday).  The Spanish settled here, but were pushed out by indigenous refugees from other Caribbean islands.  France claimed the islands in 1632 but did not settle here.
In 1660, France and England agreed to leave Dominica and St. Vincent to the native Caribs.

Due to the domninant rainforests and the prospect of making money from them, English and French began harvesting timber and in 1690 the French established a permanent settlement and started bringing slaves to the island.
Slave labor became more important when coffee plantations were established.  After the Seven Years' War, England took possession of Dominica in 1763 and kept it through several attempts to return Dominica back to French rule.
In 1833, the Slavery Abolition Act ended slavery in Dominica.
Only 2 years later, in 1835, three men of African descent were elected to Dominica's legislative assembly.  In 1838, Dominica became the first British West Indies colony which had an elected legislature controlled by an ethnic African majority.

Dominica was governed by Britain until 1958.  When many Caribbean islands sought independence, Dominica became part of the short-lived West Indies Federation from 1958-1962.
In 1962, the federation dissolved and Dominica became an associated state of the United Kingdom in 1967.  Independence followed in November 1978.

Dominica is a young island which is still being formed by geothermal-volcanic activity.  Boiling Lake in Dominica's Morne Trois Pitons National Park is the world's second-largest hot spring.
Much of Dominica is covered in rainforests, which are home to many rare plants and animals, and 195 bird species.  The island's national bird  is the Sisserou Parrot, which is only found on Dominica.  The Sisserou Parrot is featured on Dominica's national flag.

Dominica has been hit hard by hurricanes and tropical storms multiple times.  The last two times were tropical storm Erika in August 2015 and category 5 Hurricane Maria on September 18, 2017.  Maria damaged approx. 90% of all builduings on the island.

Dominica is a volcanic island with few beaches and therfore tourism is less developed than in other Caribbean islands.
Bananas were Dominica's most important export, but it has declined over the years.  In response, the government has promoted diversification.  Today, Dominica's main industries are: agriculture (coffee, patchouli, aloe vera, flowers, bananas, mango, guava and papaya) financial services and tourism.

Cruise lines typically offer various excursions to their passengers.  They typically consist of one or more of the following activities:

Dominica is a fairly young socky island of volcanic origin.  It has few mostly black sand beaches.  To make matters worse, some beaches are difficult to access.  Below, I am only focusing beaches that you can reach fairly easily: 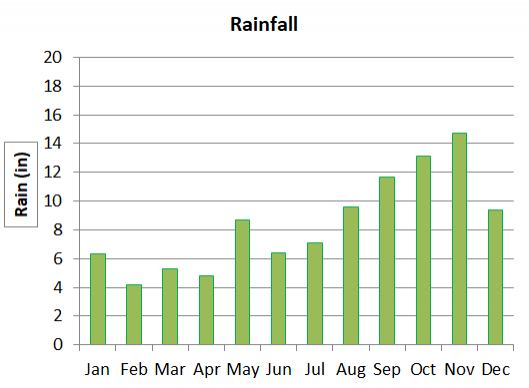 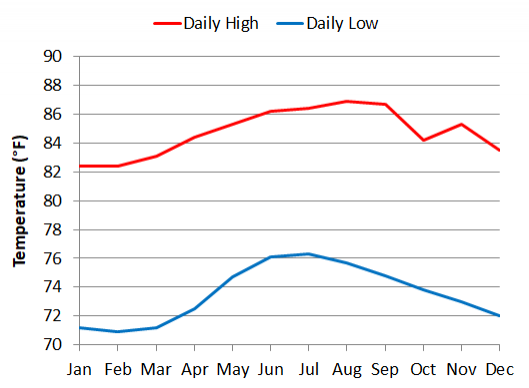 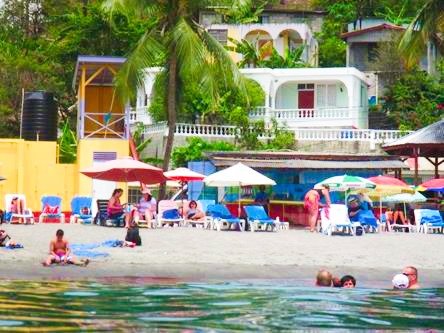 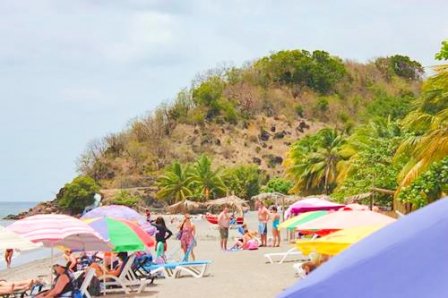 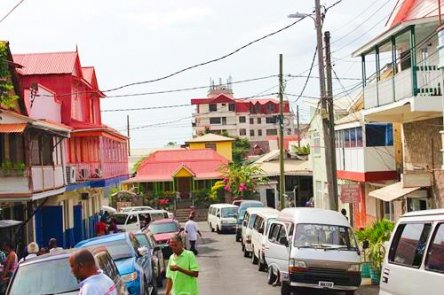 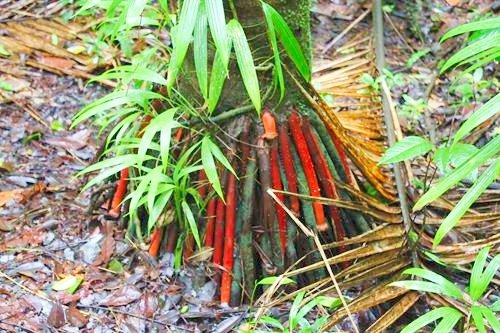 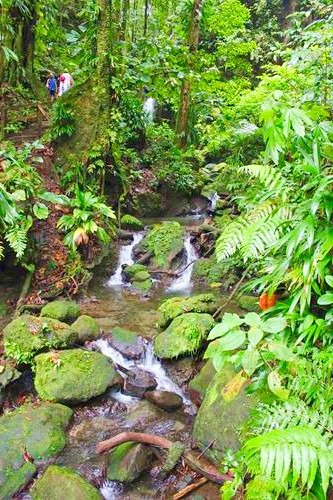 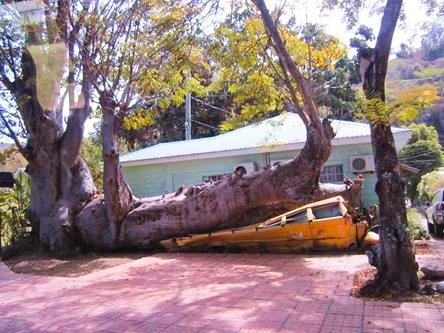 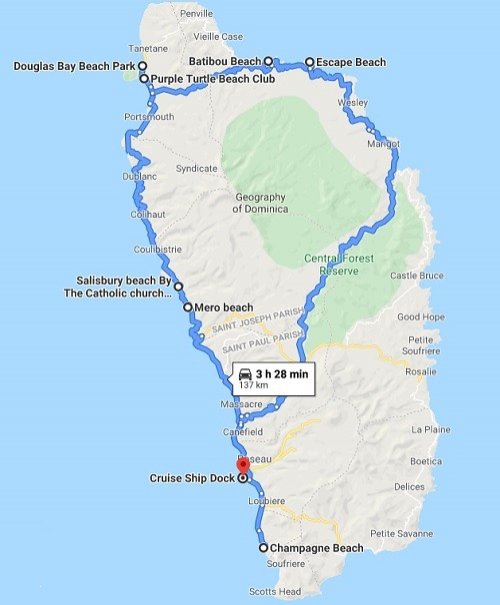 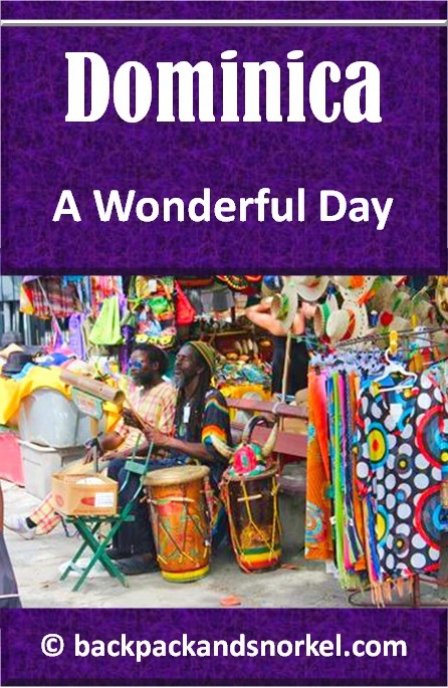 Roseau is the capital and largest city of Dominica with a population of approx. 15,000.
The cruipse dock is located in the southern part of town and within easy walking disctance to lots of restaurants and stores. 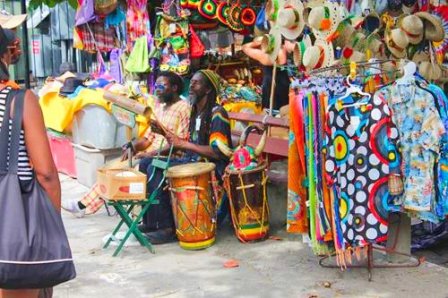 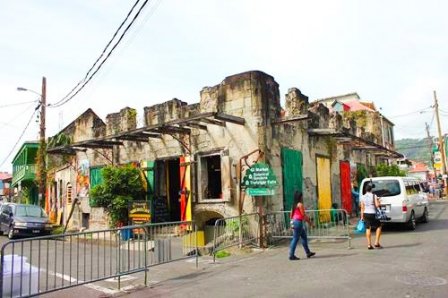 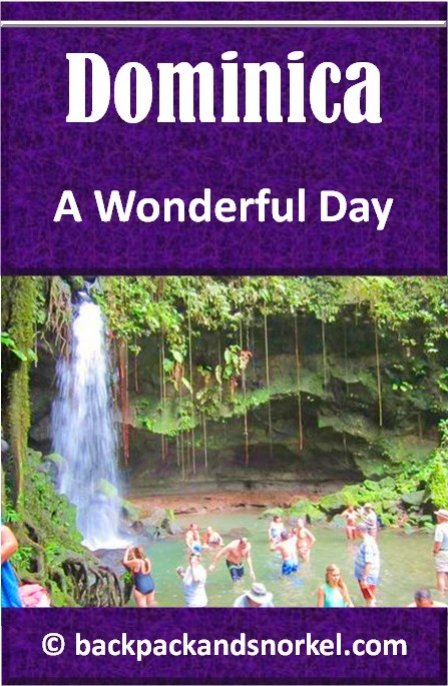 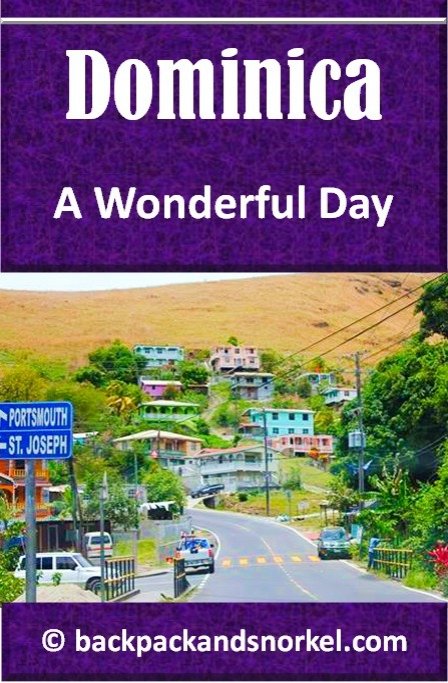 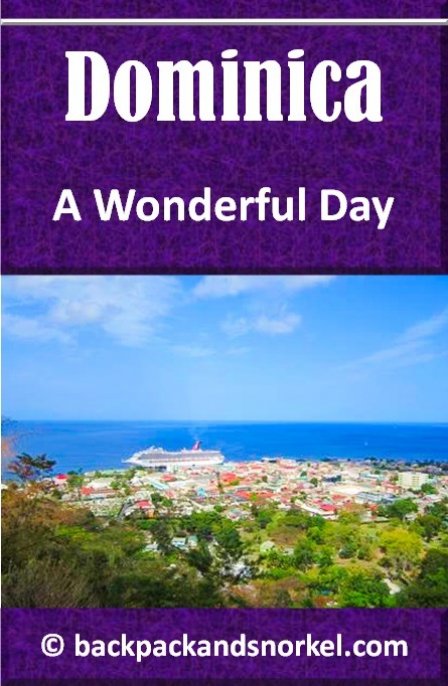 Check out my reviews of other Caribbean islands and, if you are interested in Caribbean cruises, please check out Rudy's Cruise Guide. 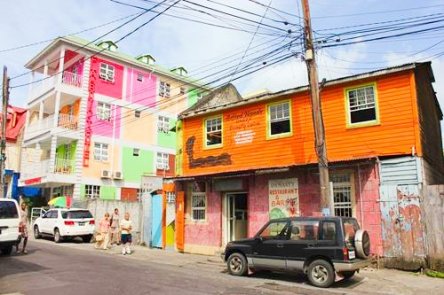 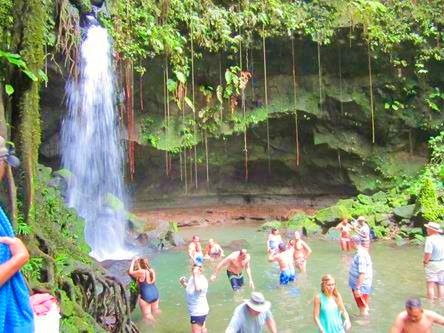 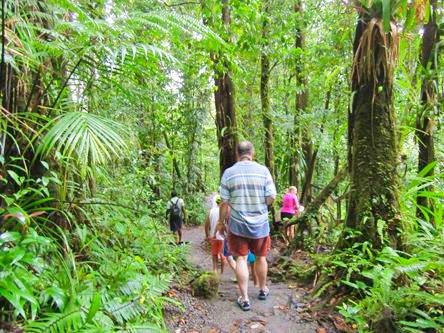 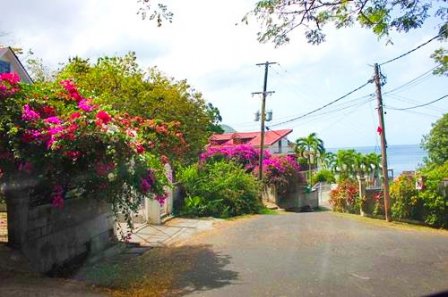 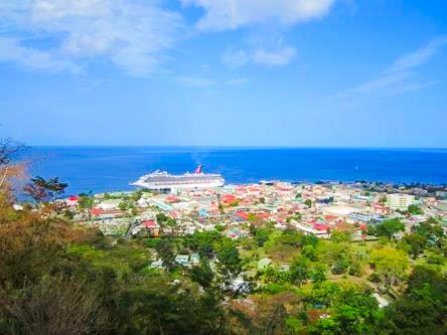 Dominica Botanic Gardens are a 40 acre park with orchid trees, bottle palms, the Carib Wood tree and an unidentifiable no-name tree.  It was considerably damaged by recent hurricanes.  The park, which is easily driveable, is home to a school bus which was crushed by a baobab tree in 1979 during hurricane David.
Jack's Trail, which leads up to the Morne Bruce lookout, starts here.

The Morne Bruce viepoint can be reached by car or by Jack's Trail that starts in Dominica Botanic Gardens.  From here, you have a wonderful view of Roseau and the ocean.  On your drive up, you will see many houses with colorful flowers and trees.

Located on the west side of Morne Trois Pitons National Park, Trafalgar Falls are the most-visited sight on the island.  Trafalgar Falls actually consist of the Father Falls (85m drop) and the Mother Falls (40m drop).  They can be reached through a short walk from the visitor center.  The admission is US$5 per person.

After Trafalgar Falls, Emerald Pool the second most visited waterfall in Dominica and a World Heritage Tourist Site.  It is a 40-foot waterfall located in the heart of Dominica in Morne Trois Piton National Park.  Normally, the pool at the bottom of the falls has a green color, which will turn into a beautiful emerald color when the sun shines onto it.  Hence the name Emerald Pool.
The falls can be reached from the parking lot through a 10min walk.  While the walk is not difficult, there are some stone steps that can be slippery, so please be careful.
Also, bring your swimwear, a towel and water shoes if you want to swim at the pool at the bottom of the falls.
In case that you drive there by yourself, the site has an admission fee of US$5 per person. 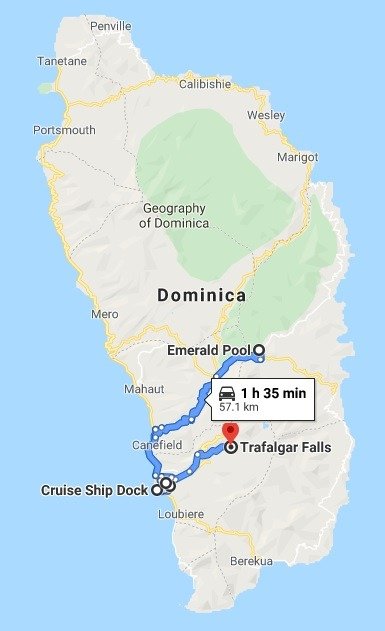 Here are more photos from Dominica: