This Backpack and Snorkel Travel Guide (St. Thomas Purple Guide) provides information about the best things to do on a cruise to St. Thomas and ensures that you will be Making Memorable Moments on a relaxing vacation in St. Thomas.

Why you should visit St. Thomas

St. Thomas is a popular port-of-call for cruise ships.  It features beautiful beaches, turquoise water and lots of shopping.  Magens Bay Beach is one of the best beaches on the planet.  Cruise ship passengers who want to get away from it all can take a taxi to some less crowded beaches or a ferry to St. John.

St. Thomas is the most populous of the three US Virgin Islands.  With its 52,000 people, St. Thomas has almost half of the population of the USVI.
The island was settled approx. 1500 BC by the Ciboney people and later by the Arawaks and then the Caribs.  Columbus sighted the island on his second voyage to the New World in 1493, but it took until 1657 until the Dutch West India Company established a post here.  The Danes settled St. Thomas in 1671, 6 years after their first attempt failed.  Plantations were established for sugarcane production and the first slave ship arrived in 1673 and St. Thomas eventually became the biggest slave market in the world.
In 1691, the main settlement was renamed to Charlotte Amalie to honor of the wife of Denmark's King Christian V.
In 1796 a Jewish community developed and the synagogue that was built is the oldest synagogue in continuous use anywhere in the United States.
From 1801 to 1815, the island changed hands between the British and Danish a few times.
The Danish revolution in 1848 freed the slaves.  As the importance of sugar exports dropped and the Danish neglected the islands, the US finally purchased St. Thomas, St. Croix and St. John in 1917 for $25 million, which would be about a half billion US$ in today's money.
Citizenship was granted to island's inhabitants in 1927.

This is St. Thomas' most popular beach for good reason.  National Geographic Magazine named it one of the top ten of the world’s most beautiful beaches.
The beach is one mile long, has white sand, turquoise water, is lined with palm trees and lies in the sheltered Magens Bay, which makes for good swimming.  To get there, take one of St. Thomas' taxis.  The beach has an admission for tourists of US$5 per person 13 years and older.  You can buy snacks and rent water sports equipment.
When we arrived, there were only few people on the beach but people kept coming and by noon, it got so crowded that we decided to leave and explore Charlotte Amalie.
Between 10am and 11am, dark clouds appeared and it started raining on one side of the beach while it was dry on the other.  Almost as quick as the clouds appeared did they vanish and we ended having beautiful blue skies again.

Tourism is highly important to St. Lucia and the majority of tourists arrive as part of a cruise.  Please also check out Rudy's Cruise Guide for Beginners & Others. and the Backpack & Snorkel Store for a detailed travel guide.

The best things to see and do in St. Thomas for cruise ship passengers

The main tourist attractions are the beaches.  Magens Bay beach is often mentioned as one of the best beaches on the planet.

Typical excursions for cruise ship passengers cover one or more of the following:

The best beaches of St. Thomas are:

The best snorkeling in St. Lucia can be found here:

We decided to visit Magens Bay Beach in the morning, before all the cruise ship passengers arrive and explore Charlotte Amalie, the capital of St. Thomas in the afternoon.
That was a good idea.  The beach was mostly empty when we arrived in the morning.  People kept coming and by noon it was very crowded.

Cross the street and go around the corner to the entrance gate of Fort Christian.  This salmon-red painted fort was built in 1680 and named after the Danish king Christian V.
It is the oldest building in the entire US Virgin Islands.  It was named a National Historic Landmark in 1977 and has been used as a fort, governor’s residence, prison and police station, and as a court.  The fort was closed due to a much needed renovation when we were there

Construction of this church finished in 1793 and that makes it the oldest church in St. Thomas.  Since then, it has been expanded several times.

From here, walk to the Government House.
This white neoclassical building, which was built in 1867 by the Danish, houses the administrative headquarters of the U.S. Virgin Islands.  The first two floors are open to the public, so walk around and take a look at the artwork created by Camille Pisarro and West Indian furniture. 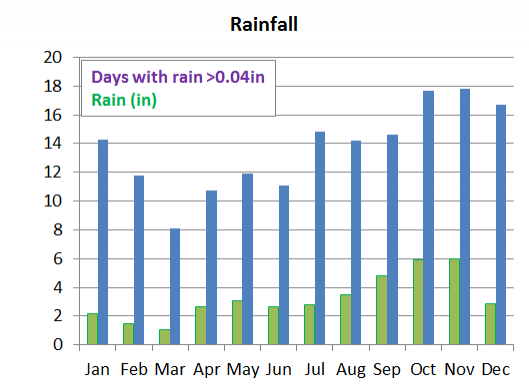 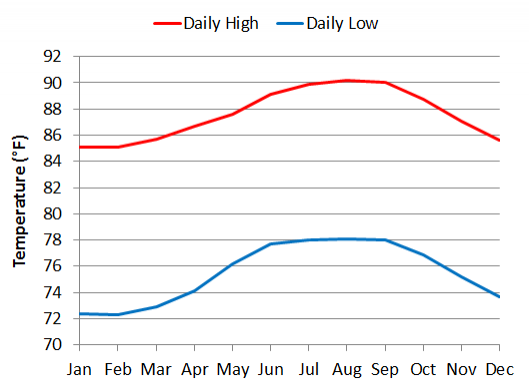 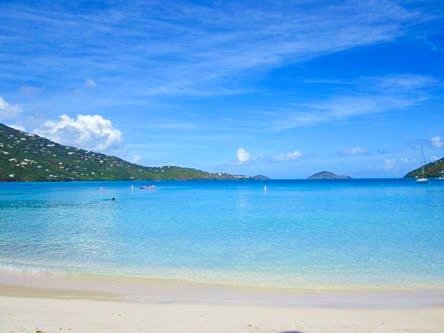 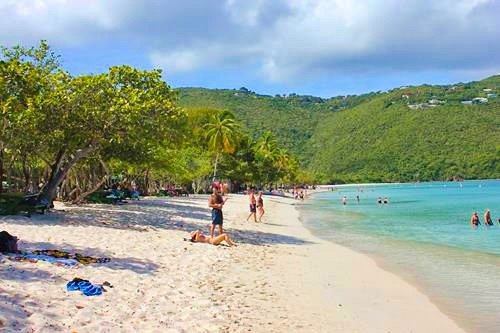 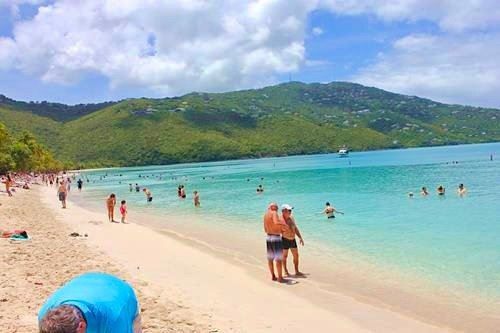 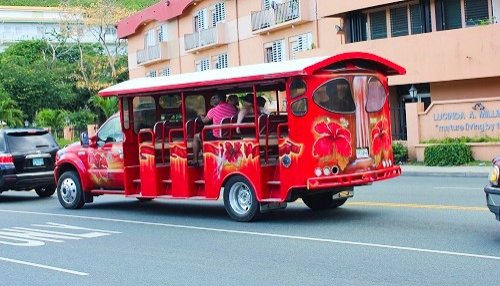 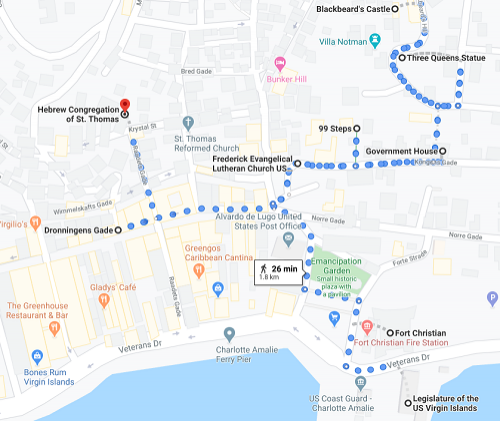 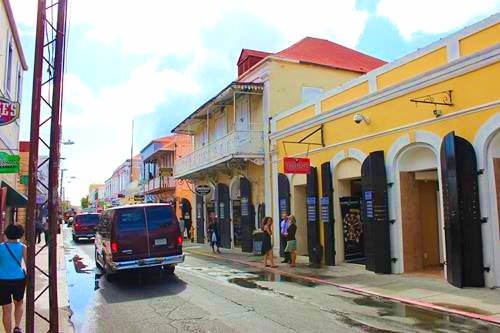 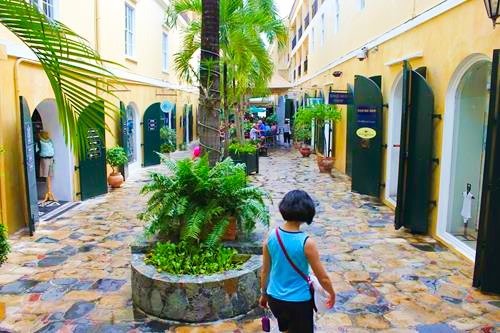 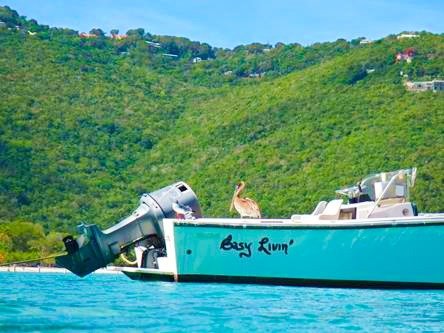 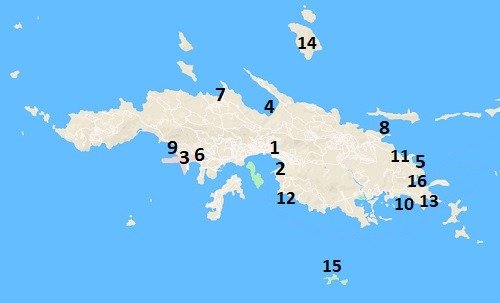 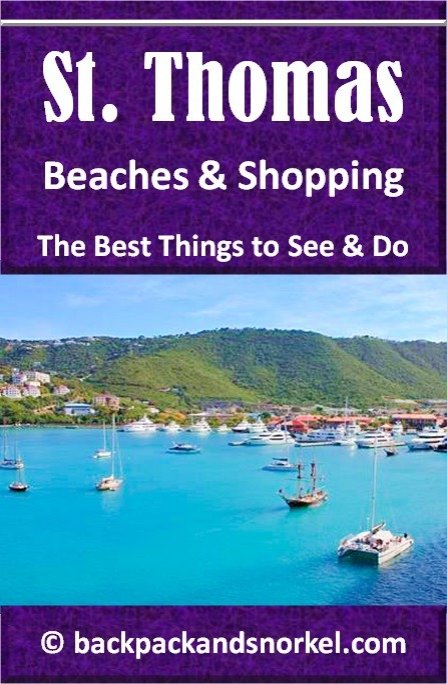 When you leave the building, turn right and go up the staircase and then turn left on the street names Blackbeards Hill.
Very important while you walk on Blackbeards Hill: Turn around and enjoy a wonderful view of the bay.
Keep walking and you will soon see the Three Queens Statue and Blackbeard's Castle, a tower where the infamous pirate John Teach aka Captain Blackbeard is said to have looked out to sea.  This story is, however, most likely untrue.

Now backtrack your steps until you are halfway between the Three Queens Statue and the steps that you originally came up and make a right onto a path that will lead you to the "99 Steps" which in reality are actually 103 steps.  They were built in the early 1700s and lead you down towards your next destination.

Follow the street to the south west until you get to Dronningens Gade (Main Street), one of the main shopping streets in St. Thomas. Walk along this street and make frequent left turns into the multitude of pathways that are lined with stores and restaurants.

Charlotte Amalie can easily be explored on foot.  The main attractions are about a 30min walk or 10-15min taxi ride from the cruise port.  Taxis in St. Thomas are shared open buses. 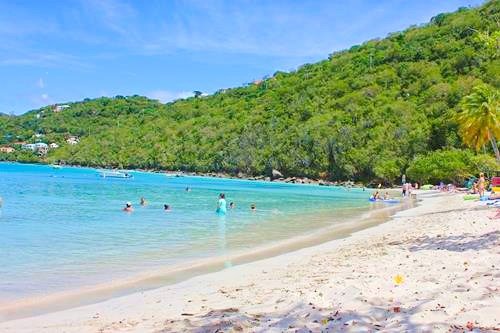 Legislature of the USVI Building

Start your self-guided walking tour here.  You will not be able to access the building, which was built in 1874.  If you look closely, you may be able to see the Roman numerals MDCCCLXXIV and the Danish coat-of-arms on the building.
In 1917, the ceremonies transferring ownership from the Danish West Indies to the United States were held here.
The building was restored in 1956 and housed the Legislature and the Department of Social Welfare and from 1970 on, it solely serves as the home for the Legislature of the USVI. 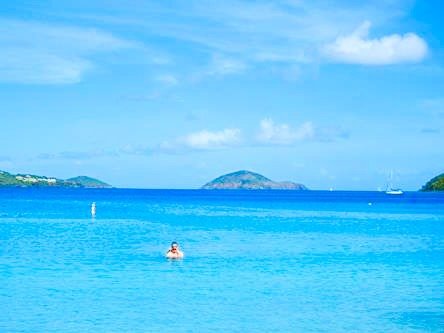 Here are some more photos taken from various places in St. Thomas: 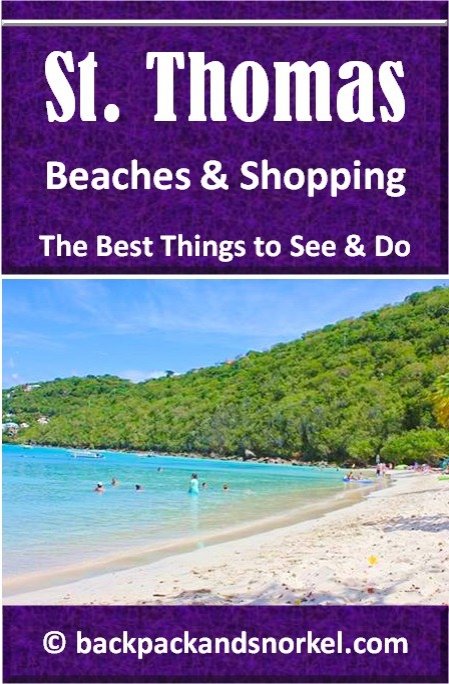 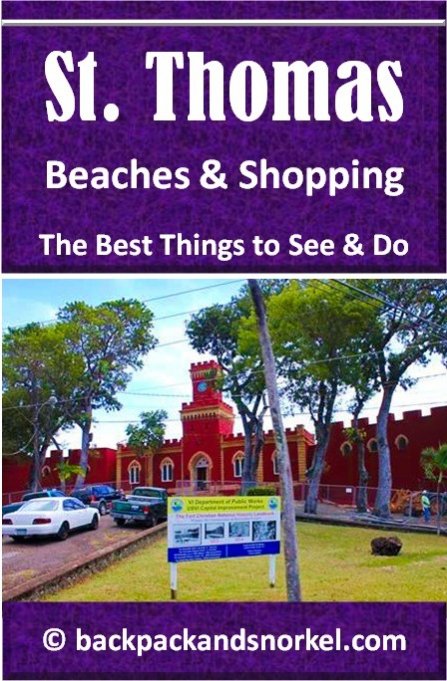 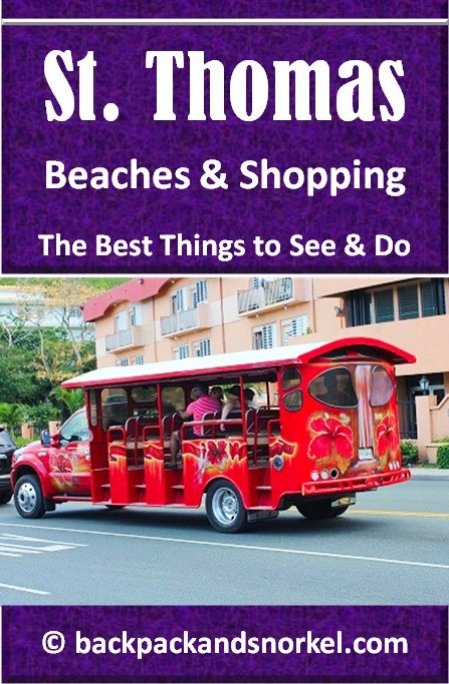 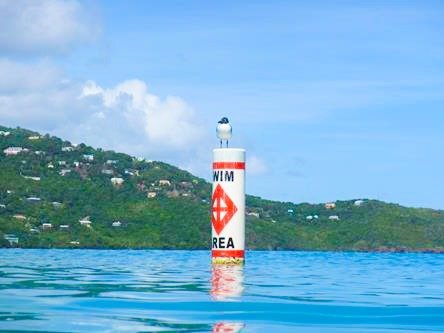 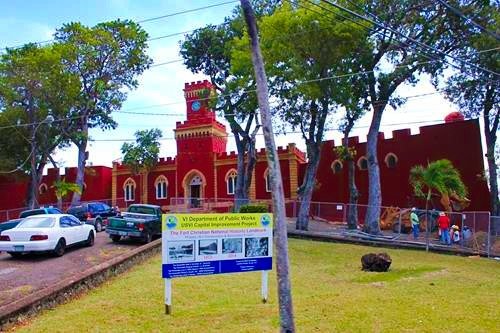 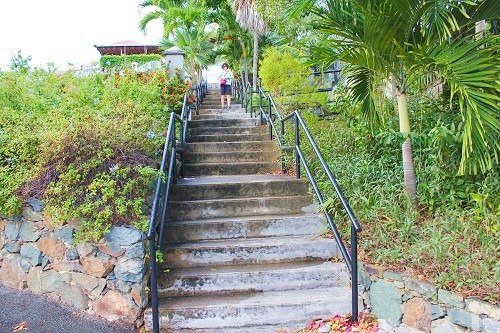 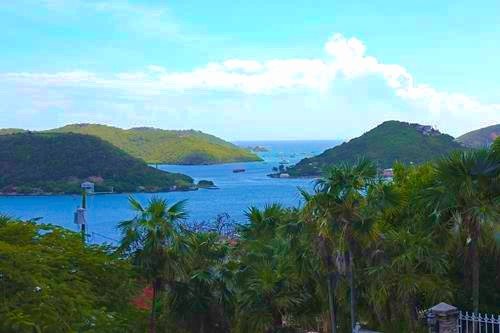 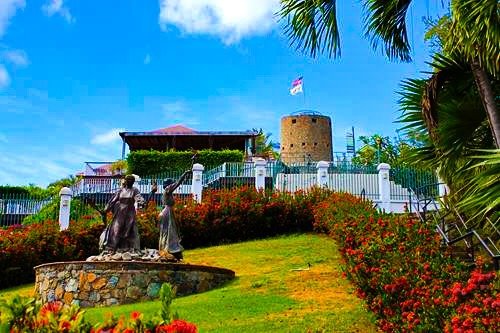 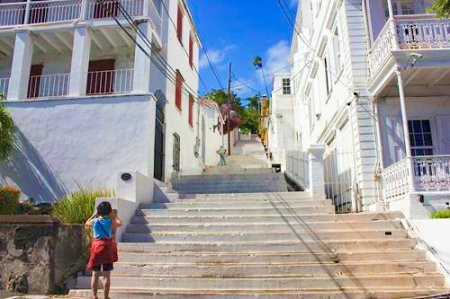 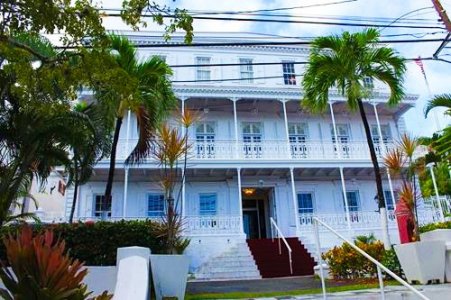 When you come to a cross street called Raadets Gade you need to make a choice: either continue shopping or turn right and walk towards the St. Thomas Synagogue which is 2 blocks away.
St. Thomas Synagogue is the oldest continuously used synagogue in the US and the second oldest in the Western Hemisphere. The congregation was founded in 1796 and the building that you see today was finished in 1833. 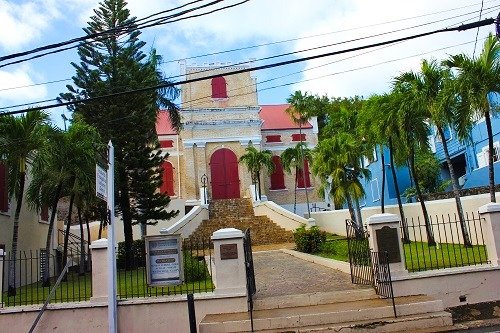 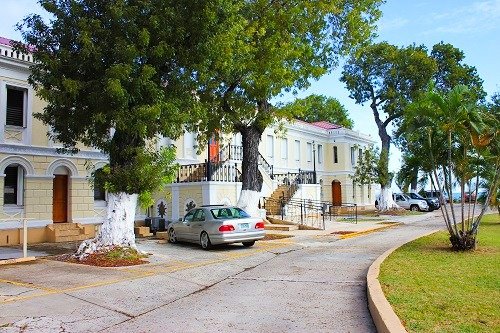 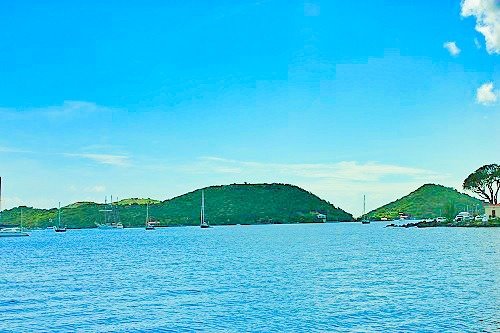