This Backpack and Snorkel Travel Guide (Grand Turk Purple Guide) provides information about the best things to do on a cruise to Grand Turk and ensures that you will be Making Memorable Moments on a relaxing vacation in Grand Turk.

Grand Turk is a Caribbean island of the Turks and Caicos Islands which are a British overseas territory.  It is only 7 square miles big and has a population of about 3,700.  Even though Grand Turk is much smaller than the Caicos islands and has a lower population, it has the territory’s capital city Cockburn (pronounced Co-burn).  Cockburn is also the oldest still established settlement in the Turks and Caicos Islands.

The language is English and the US dollar is the island’s currency.

Some researchers believe that Grand Turk was the first island in the New World that Christopher Columbus made landfall on during his first voyage in 1492.  This is in contrast to the widely believed opinion that San Salvador Island or Samana Cay in the Bahamas may have been the place.

Mercury-Atlas 6, called Friendship 7, was the first US orbital spaceflight.  It was piloted by John Glenn and took place on February 20, 1962.  It landed off Grand Turk’s southeast cost and a replica of it is on display at the Grand Turk Island airport and more exhibits can be seen at the Turks and Caicos National Museum.

Over the years, Turks and Caicos were governed by the Spanish, British, pirates, and Jamaica.  The islands got their own government in 1976, but remained a British colony.  In 2002 the islands were re-designated a British Overseas Territory and the islanders gained full British citizenship.  In the 2016 elections, the people of Turks and Caicos elected their first female Premier.

The temperature difference between night and day on Grand Turk is as big as between summer and winter. 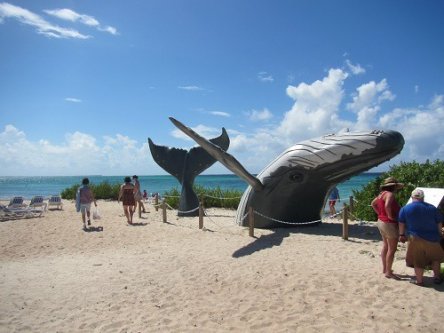 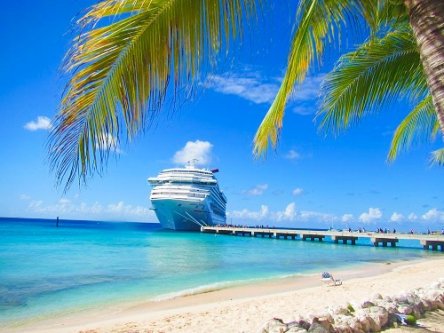 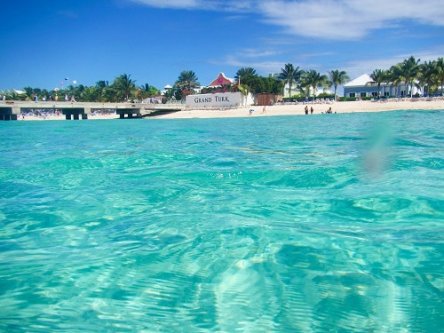 If you arrive on a cruise ship (see Rudy's Cruise Guide), your ship will dock at a pier on Governor’s Beach.  The part of Governor’s beach at the cruise port is now called SunRay beach.  This gorgeous beach will be packed on days when a cruise ship is in port and nearly deserted on other days.  It features soft white sand, turquoise water and palm trees and some free loungers.  There is also surprisingly good snorkeling.  Please see my Grand Turk Snorkeling page for photos and videos.
On days with a cruise ship in port, you can swim just a few hundred feet away from the gigantic cruise ship.  That makes for some nice photo ops. 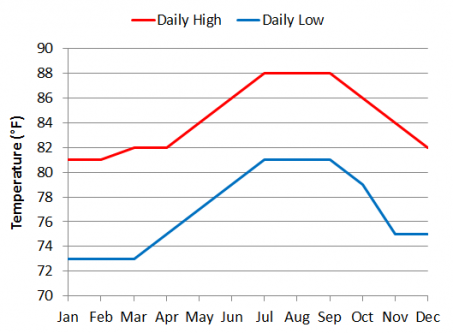 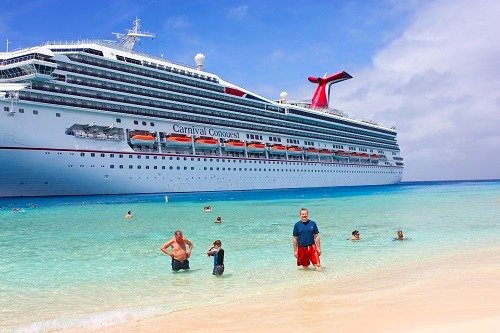 If Governor’s Beach gets too crowded for you and you are not much into swimming, then you can just walk 1/2 mile south to Boaby Rock Point, which is Grand Turk’s southernmost point.  The beach here has sandy patches between rocky areas.   If you continue east, the beach will continue as White Sands Beach.  The further East you go, the more seaweed you will find.  This is bad for swimming but good news for snorkeling on calm days.  About 700 ft (213 m) and 900 ft (274 m) feet from Boaby Point to the East, you will find some of the best snorkeling in Grand Turk as the reef is close to shore in these areas.

Cockburn Town Beach is right off the historic town.  Due to several seawalls and docks, this beach is broken up into multiple small beaches.  Each beach has white sand and turquoise water.  When we were there, they were basically empty.  Due to their proximity to town, it is only a short walk to restaurants and stores. 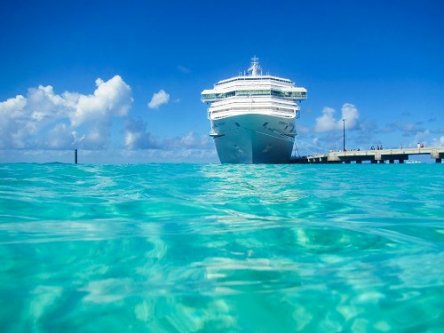 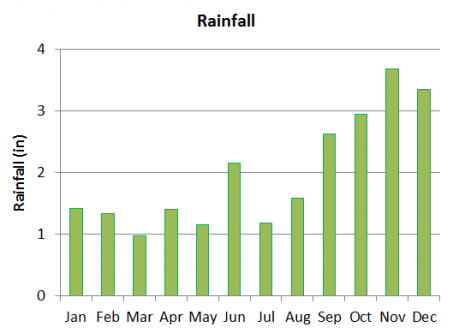 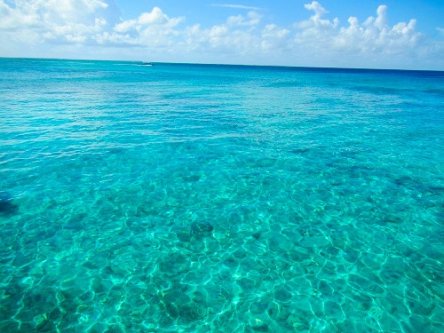 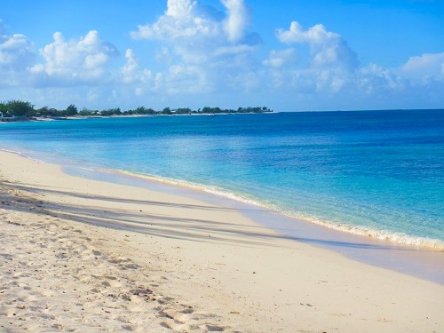 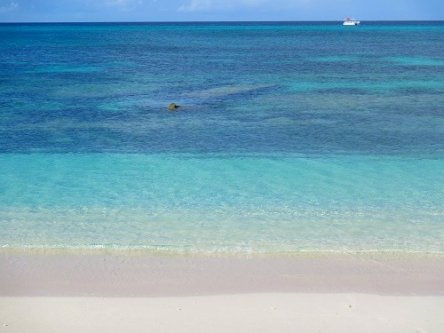 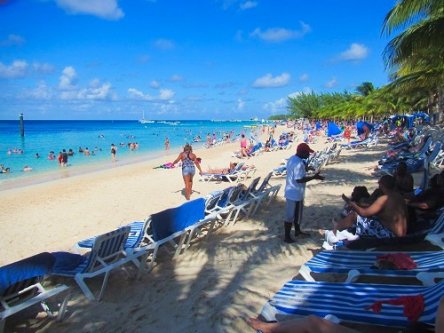 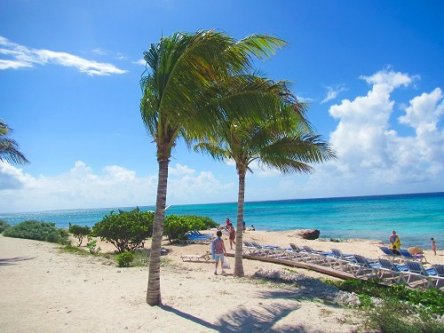 Things to see and do

There is no doubt about it, Grand Turk’s main attractions are its white sand beaches.  Nevertheless, if you have some time to spare, I like to encourage you to take a taxi or an excursion to the lighthouse at the northernmost point of Grand Turk and to spend a little time in Cockburn’s historic old town.  Taxi rates can be found here. 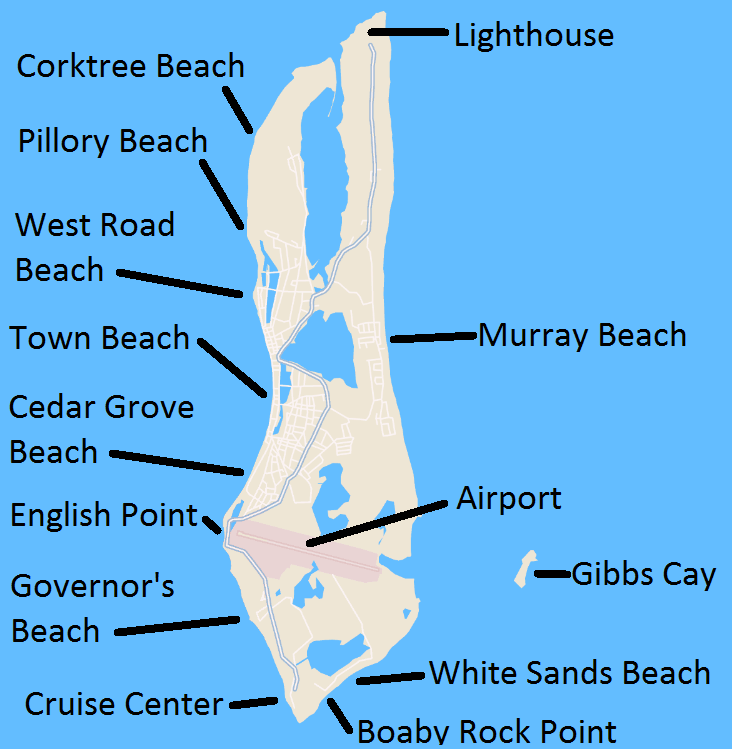 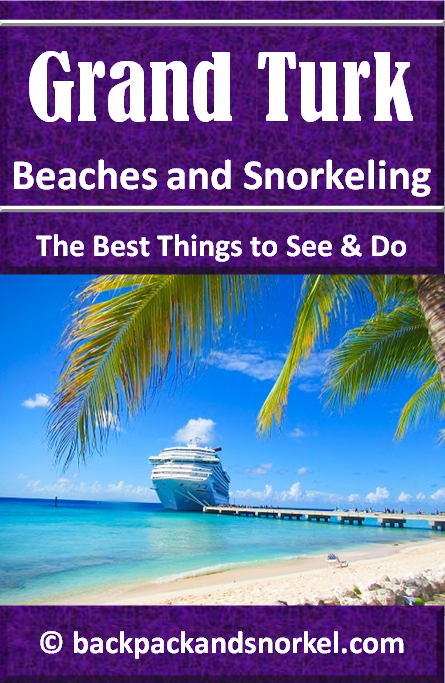 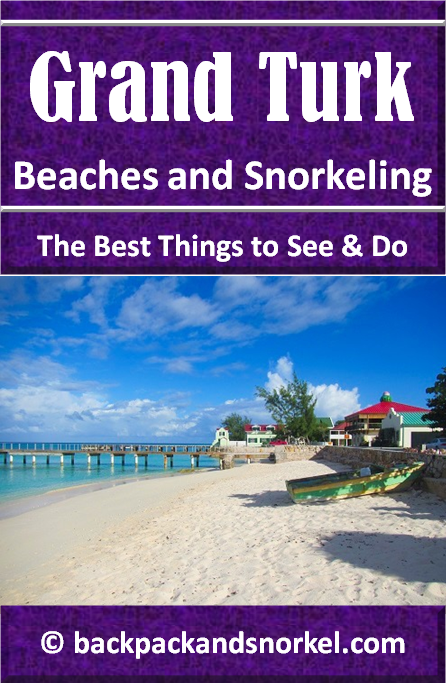 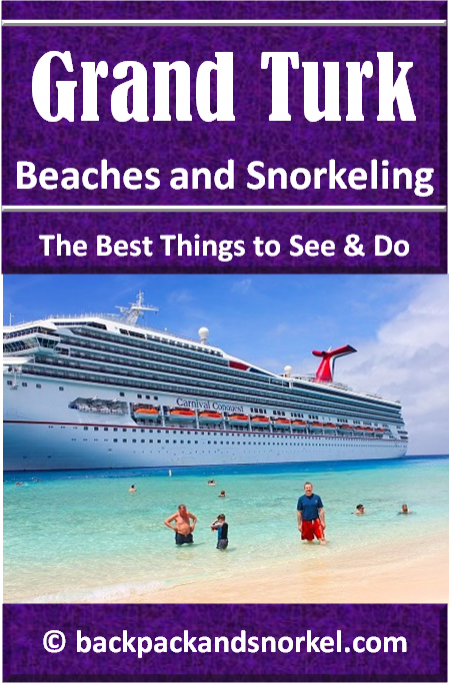 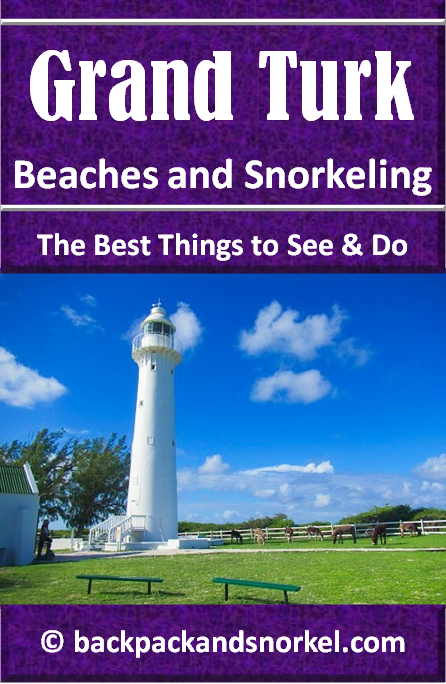 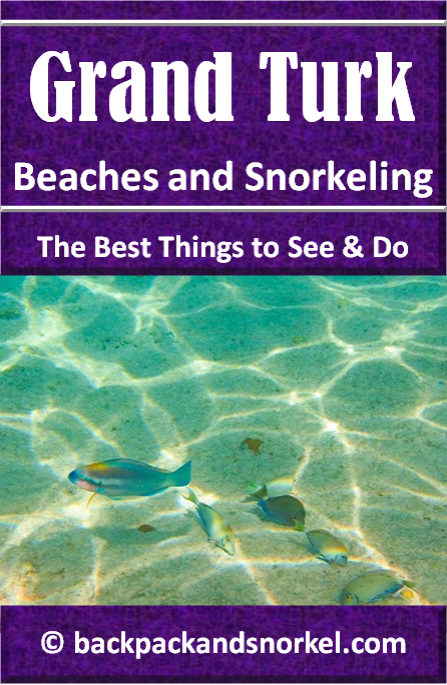 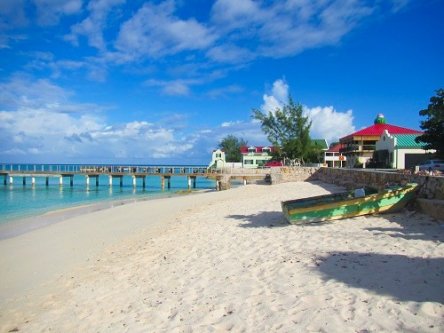 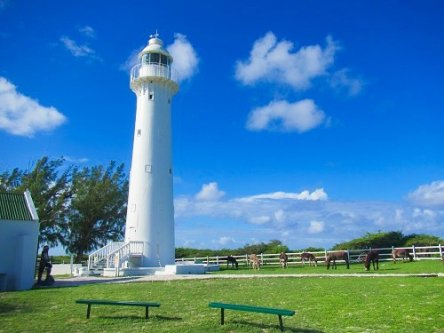 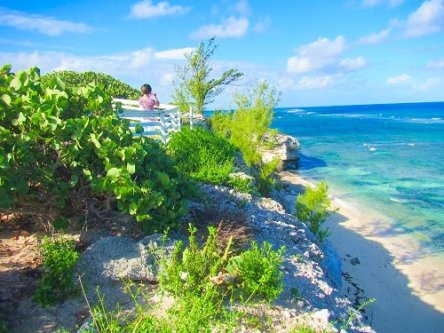 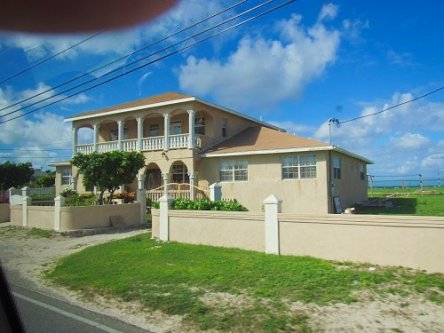 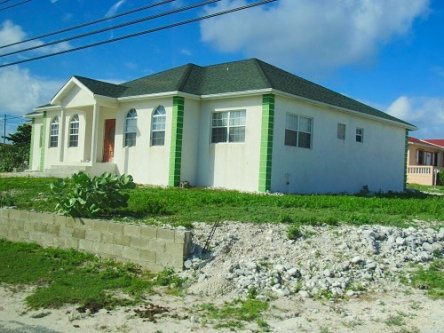 Pillory Beach lies just north of the town of Cockburn.  It is usually deserted, even though it is considered Grand Turk’s second best beach right after Governor’s Beach.  There was nobody on the beach when we drove by on our island tour.  I was told that snorkeling and diving is great about 400 yards offshore at the reef.

This is the longest beach on Grand Turk and mostly undeveloped.  You will find lots of seaweed and sadly also plastic trash from the Atlantic Ocean which make for bad swimming and render the beach somewhat unattractive.

Gibbs Cay is a small island located about 1 mile (1.5 km) southeastern of Grand Turk.  It is a beautiful island with white sand beaches and turquoise water and good snorkeling, but its main attraction are large numbers of stingrays, which are used to being around people.  You can visit this island on a guided tour where you will get the chance of a sting ray encounter.

One of the major tourist sites that is not a beach is the lighthouse at the very Northern tip of Grand Turk.  It was built in 1852 and is no longer operational, but it is the only lighthouse in the Turks and Caicos Islands and worth a visit.
The best way to get there is either on a tour, by taxi or rental car/scooter/bike.  I think the admission of $3 per person is well worth it, even though you cannot get into the lighthouse.  On the grounds there is a small snack & gift shop, a nice vista point on the white beach and turquoise waters below and a scenic coastal path that leads down to the beach.  You can see the occasional Turk and Caicos donkey elsewhere on Grand Turk, but for whatever reason we saw about 10 at the lighthouse.

Her Majesty’s Prison was in operation until 1994 and is now a tourist attraction.  Admission is $7 and opening times are limited to those times when cruise ships are in port.  The prison was built in the 1830s and was Turks and Caicos Islands’ only prison until its closure in 1994.  At that time, it housed on average 50 to 60 prisoners.  Only very few prisoners ever escaped, simply because there is no way to swim to any other island and Grand Turk is a small island with a small population (< 4,000 people), so there is really no way to hide.

This is Turks and Caicos Islands only (!) museum; the admission is $5 per person.  It was established in 1991 in the Guinep House (one of the oldest buildings on Grand Turk) and it houses artifacts of the “1513 Molasses Reef Wreck” (the oldest excavated European shipwreck in the Americas) and of the indigenous people of the Turks and Caicos Islands (Tainos or Lucayans).  Other exhibits are about the European settlers and, of course, the 1962 landing of John Glenn’s Friendship 7space capsule.

This is a beautiful small church with whitewashed exterior walls and red shutters, doors and trim.  If you have a few minutes, take a look inside.

From the 1600s until the mid-1900s, sea salt was produced on Grand Turk.  For that, a system of ponds (salinas) was created where water was allowed to evaporate and the residual salt was harvested.  The small salinas on Grand Turk could not compete with the much larger operations abroad, so this industry vanished in the 20th century.  The remnants of the old salinas, e.g. Hawkes Nest, which is in walking distance from the cruise port, can be visited free of charge.  Just keep in mind that these areas are not improved for tourism.  At Hawkes Nest, you can see large amounts of sea salt crystals and individual ponds with the surrounding stone walls.  Other salinas to see are Red Salina and Town Salina.

Salt House, located at the Town Salina, is a museum working where you can see the salt canals, a replica of a windmill and there is a Bermuda Sloops exhibit.  Bermuda sloops were made out of cedar wood as other woods would deteriorate in the highly salty environment.

My suggestion is to get out of the cruise port and ask a taxi diver if he/she can give you an island tour.  My experience is that they will be happy to do this and they will bring you to all the sites mentioned above.  Make sure to ask then why there are so many unfinished houses.  We were surprised by the reason.  Here are some photos from our city tour. 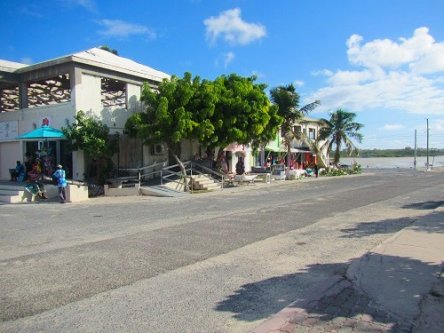 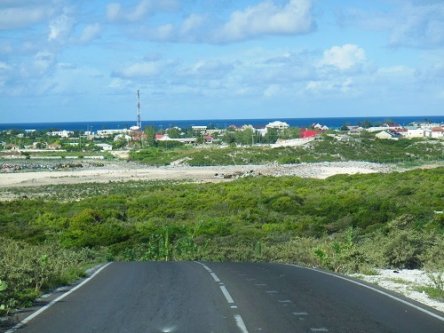 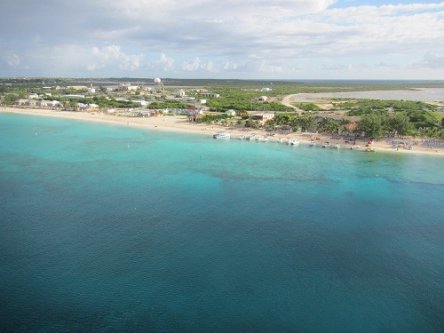 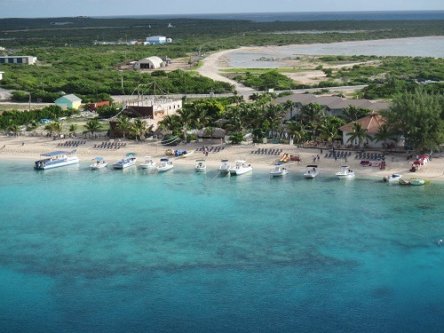 At the end of a perfect day 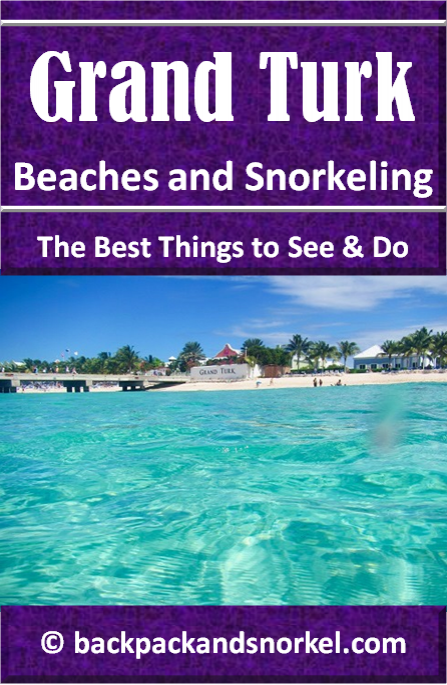 Governor’s Beach as such good good snorkeling that I have make a separate page just for snorkeling on the island.  Please click here for the Grand Turk Snorkel Experience. 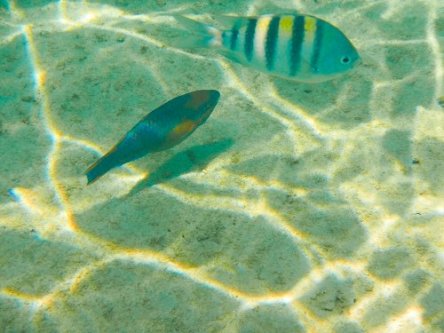 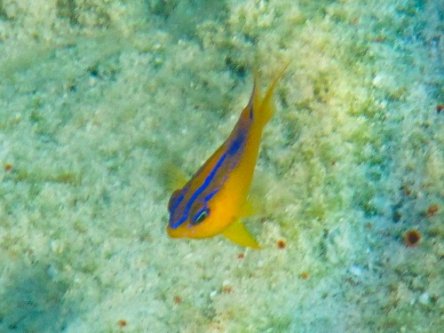