This Backpack and Snorkel Travel Guide (South Africa Purple Guide) provides an itinerary that covers the highlights of South Africa, Victoria Falls in Zimbabwe and the Okavango Delta in Botswana and ensures that you will be Making Memorable Moments on a relaxing vacation in South Africa.

I booked the flights to South Africa with Egypt Air.  During a 10h layover in Cairo we would see the pyramids and I even had a private tour guide tour booked.  Wonderful!

Sadly, a few weeks before the trip there were riots in Cairo and airlines offered passengers to cancel their flights.  Facing the prospect of not seeing the pyramids and spending 10h in the airport, I reluctantly cancelled the flight and luckily Ethiopian Airlines still had seats available through Addis Ababa.  This would turn out to be a wonderful decision.  Spoiler Alert: I LOVE ETHIOPIAN AIRLINES!

Why?  Because we had our first Boeing 787 Dreamliner flights on Ethiopian Airlines and because they upgraded us to Business Class for the long flight from Addis Ababa to New York, even though I only had OnePass Silver Elite status and because they served some delicious authentic Ethiopian food in business class.

We chose the private game reserve, as game drives were allowed to go off-road everywhere making it easy to follow the wildlife.

From the minute we were picked up at the HDS airport, our expectations were constantly exceeded!  At the camp, we were warmly welcomed with a glass of champagne and super friendly personnel.  The camp is located in a remote area in the bush and yet, it has all amenities that you expect from a hotel in a city, like running potable water, electricity, free wifi in the main area, some cell phone signal, heating blankets, A/C, automatic insect repellent sprayer, and showers with high water pressure.  There is no TV, though.  We had a spacious 2 bedroom chalet with a large bathroom (double shower, bathtub, 2 sinks) with river view.  As it was the end of the dry season, the river was mostly dry, but there was still water near the main area.

Our guides had problems finding a leopard for us.  One day, it was only us, Moshe and Nicolas in the Rover, they saw two leopard tracks crossing each other and going off in opposite directions.  So, Moshe followed one of the tracks by foot and unarmed and Nicolas did the same in the opposite direction.  Before leaving they told us: Don’t worry, you will be fine.  Just stay in the Jeep; lions and leopards hunt and kill two-legged creatures but they don’t have anything on the dinner menu that drives on 4 wheels.  So, they left and came back after 30min or so, found us still alive in the Jeep, and decided to follow one of the tracks that eventually lead us to the leopard.

Another day, we saw a bunch of lions resting on one of the roads.  So, we stopped and watched and then from behind came another lion that walked slowly by our Jeep, maybe 2ft (0.5m) from the feet of the spotter and maybe 6ft (<2m) from us inside the Jeep.

Apparently you can do that with lions.  All guides in South Africa and Botswana kept far away from hippos, especially if they are in the water and they never turned off the car or boat engines.  Hippos apparently are never in a good mood and you want to be far away as they can attack at any time.

Johannesburg (or Jozi, or Jo'burg) is the largest city in South Africa, the seat of South Africa’s Constitutional Court and Africa's economic powerhouse.  We took one of the red city sightseeing buses and hopped off at many stops to explore the beautiful sights the city has to offer.  The most impressive Making Memorable Moment was the Apartheid Museum which is one of the best museums I have ever visited.  It is suggested to spend 2h and I cannot understand how this is possible; we were absolutely fascinated and spent 5h.  The museum starts appropriately with separate entrances for whites and non-whites .  The next 100ft in the maze are confusing as only copies of IDs are displayed without any explanation.  The next displays present provide interesting information on the very distant history of what is now South Africa.  Sadly, some of the placards have faded.  Walking down the steps you enter the main building and the exhibits that make this museum so worthwhile to see.  We started with the Nelson Mandela exhibit.  It provides fascinating insights in the life of this great leader.  The timeline starts with his parents, explains the stations of Mandela’s life and explains how he became the person he was.  Afterwards we went over to the main exhibition which starts with the colonization and the role that race played.  The museum paints the history of the country and its people and often presents views from black and white people.  All displays and explanations are very well written and organized and the timeline is easy to follow.

Our next stop was Cape Town.  Cape Town is South Africa’s oldest city and the seat of the country’s parliament.  It is located at approximately the same latitude as Buenos Aires and Sydney.  The city occupies the land between Table Bay and the near vertical cliffs of flat-top Table Mountain.

We took the Red Line Bus and hopped off at most stops to explore the beautiful sights the city has to offer.  The two Making Memorable Moments were the gorgeous views of the bay and beach-to-city-to-table mountain transition and the breathtaking views from the top of Table Mountain over the city to the ocean. 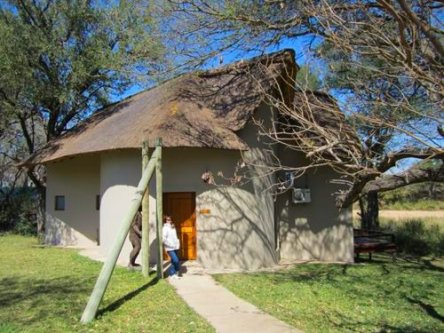 We took a guided tour to the Cape of Good Hope, the legendary home of the Flying Dutchman.  Our tour stopped at several interesting points, e.g. Boulder Beach, which is a protected beach with a penguins colony.  Another stop was at Simontown where street vendors had the lowest souvenir prices that I have seen in Cape Town.

Contrary to common belief, the Cape of Good Hope is neither the southern tip of Africa nor is it the dividing point between the Atlantic and Indian Oceans.   Africa’s southernmost point is actually Cape Agulhas about 90 miles (150km) to the east.  The point where the currents of the two oceans meet - the warm Agulhas current and the cold Benguela current - fluctuates between Cape Point and Cape Agulhas.

At Cape Point, we hiked to the lighthouse, enjoyed the great views and at Cape of Good Hope we took the obligatory photos at the sign.  Nearby we saw monkeys and austriches. 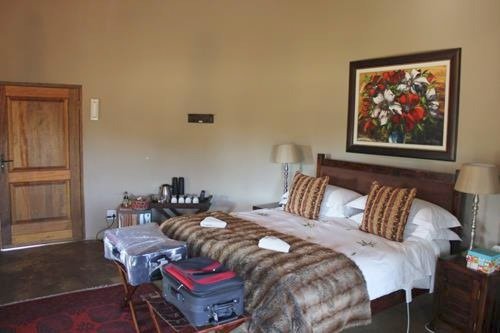 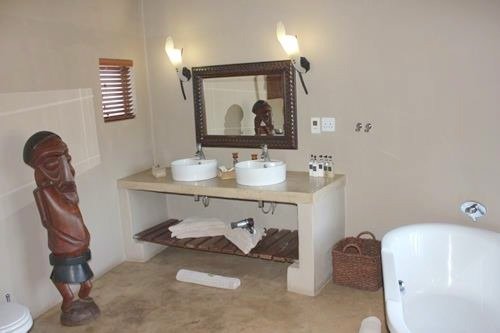 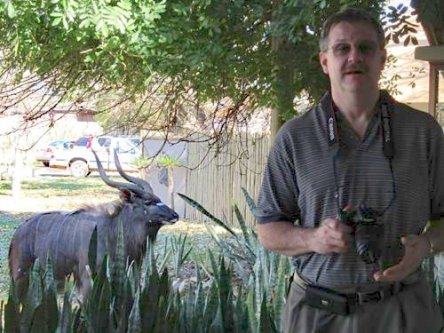 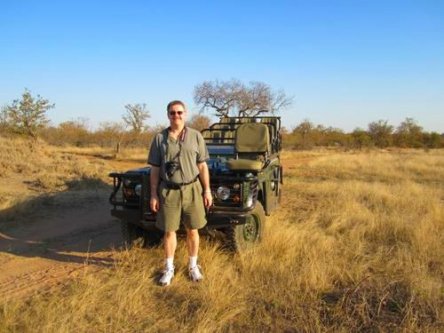 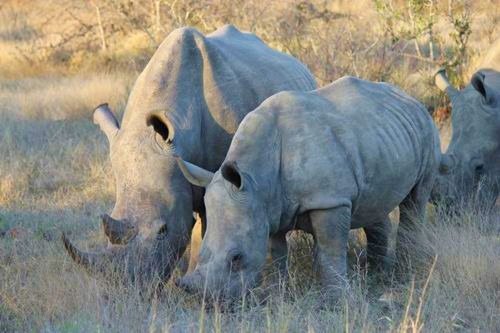 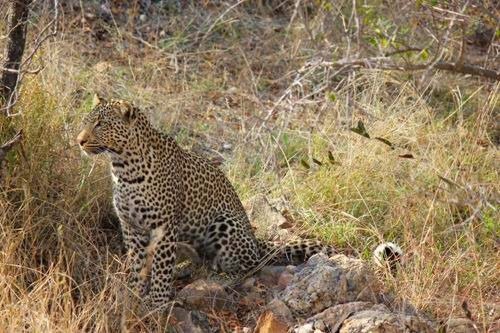 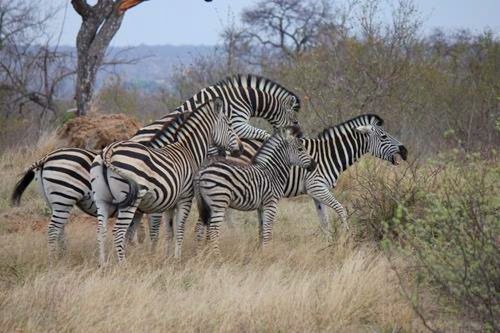 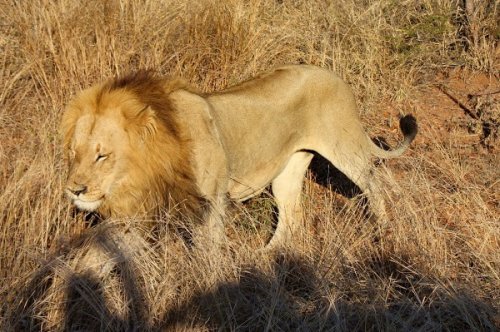 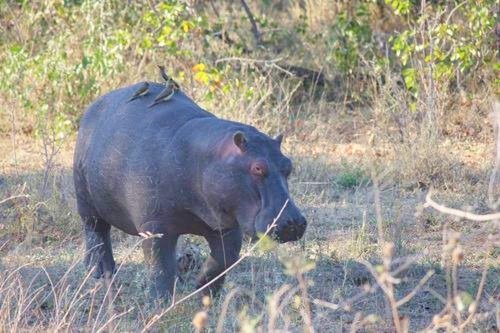 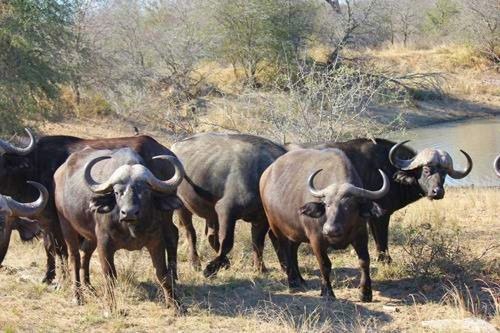 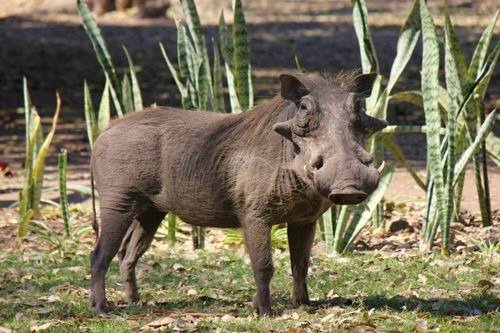 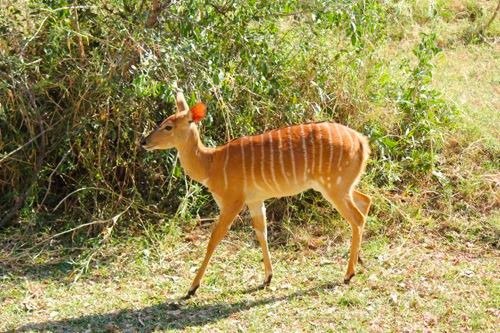 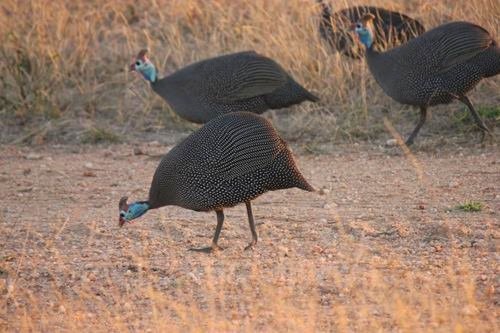 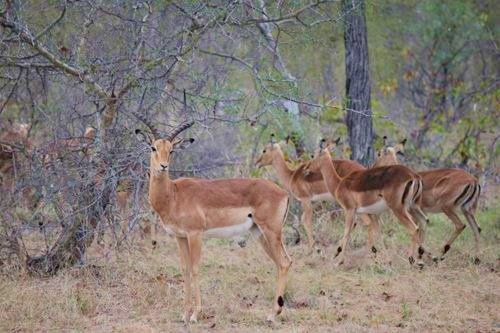 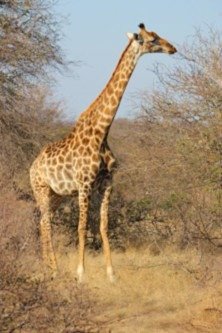 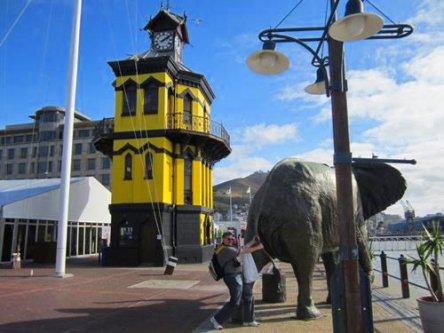 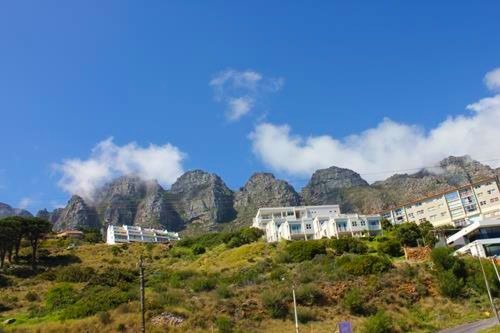 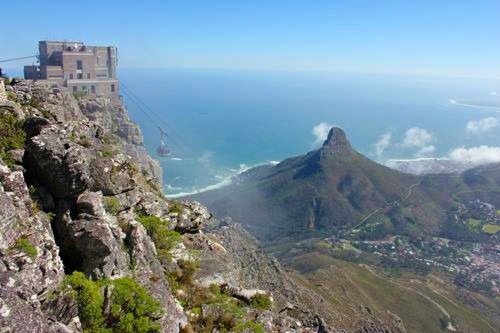 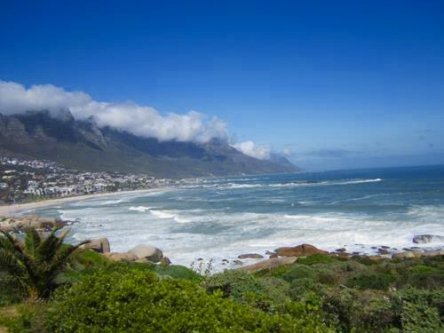 Jump to our Zimbabwe trip

Jump to our Botswana trip

For more things to see and do in Cape Town, visit the Adventure Travel Coach page about Cape Town.