This Backpack and Snorkel Travel Guide (Barbados Purple Guide) provides information about the best things to do on a cruise to Barbados and ensures that you will be Making Memorable Moments on a relaxing vacation in Barbados.

People in Barbados speak English and the Barbadian Dollar is accepted at an exchange rate of 1US$ = 2Bds.

Barbados is the Easternmost Caribbean island.  Spanish navigators claimed Barbados for the Spanish Crown in the late 15th century.  In 1536, Portugal claimed the island and abandoned it later.  In 1625, Barbados was claimed for the British crown and permanent British settlers arrived in 1627.

On November 30, 1966, Barbados became an independent state and Commonwealth and its population is about of 290,000 people.

The name "Barbados" likely comes from “Os Barbados” (Portuguese) or “Los Barbados” (Spanish) which mean "the bearded ones".  The term “bearded ones” may refer to the long, hanging roots of the bearded fig tree (Ficus citrifolia) or the indigenous bearded Caribs who inhabited the island.  Click on the map below to go to google maps for more details on where to go. 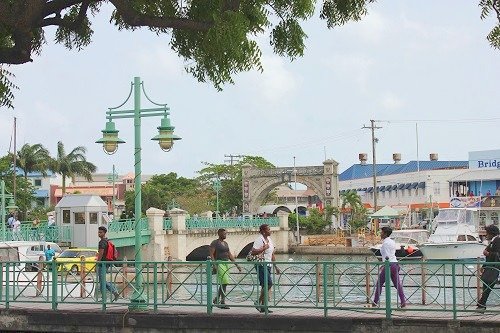 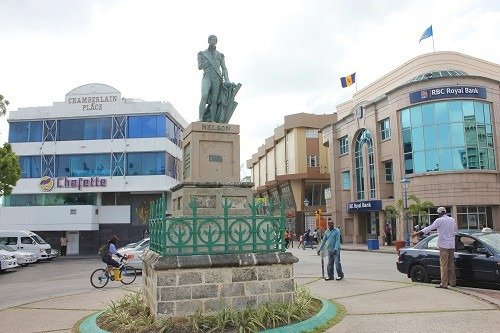 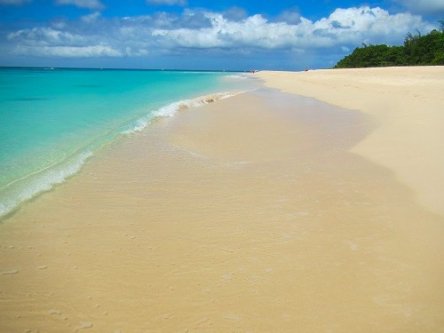 For the Bridgetown walking tour, we started at the Admiral Lord Nelson statue in Trafalgar Square.  Lord Nelson visited Barbados about a half year before his death at Trafalgar in 1805. To his honor, an existing square was renamed to Trafalgar Square and, in 1813, his statue was erected about 36 years before the famous statue in England.

The Parliament Buildings, dating from 1639, are right near the statue.  Barbados has the third oldest parliament of the English speaking world, only England and Bermuda were earlier.  The original building was built in 1640 but was destroyed in a fire in 1668.  Until the new building was completed in 1874, officials met in private homes and public taverns.

Across the plaza lies the Chamberlain Bridge which apparently took the place of an older Arawak Indian bridge that spanned the inlet.  It is said that Bridgetown got the name from “The Bridge”.

At the other end of the bridge, you can see the Independence  Arch which was built in 1987 to mark Barbados' 21st year of independence.

A short walk to the East is the Cathedral Church of Saint Michael and All Angels.  It was built in 1789 and upgraded to a cathedral in 1825.  Several famous Bajans are buried here.

Further to the East lies Queen's Park which used to be known as King's House and was the residence of the commander of the British West Indies troops.

In this park you can see a Baobab tree with a 61.5ft circumference and an estimated age of 1,000 years.  It is believed that this is the largest tree in Barbados.  Interestingly, this tree is native to Africa so a seed must have floated across the Atlantic ocean to germinate in Barbados.

Walking back towards the Cathedral and then North, you come to the Central Bank Building which stands 11 stories tall and is the tallest building in Barbados.

Walking further North East, you will get to the last stop, which is the Synagogue and Montefiore Fountain.  Built in 1654, the Synagoge is apparently the oldest synagogue in the Western Hemisphere.  It was destroyed by a hurricane in 1831 and was rebuilt in 1833. The cemetery has tombstones dating back to the 1630s.

It is said that the Jews who came from Brazil in the 1620s introduced sugar cane to the Caribbean. 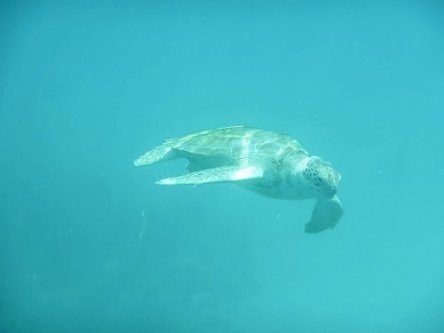 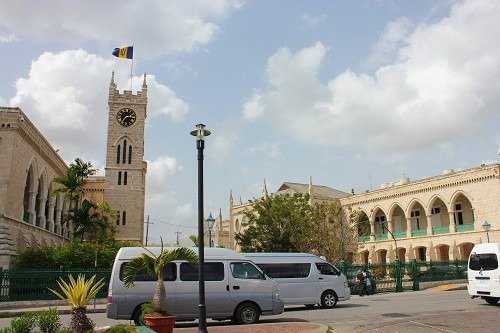 On our last trip, we decided to check out Brighton Beach which is a short taxi ride from the cruise port.  Brighton Beach is part of a long stretch of sand that goes from Brandon Beach in the South all the way to Batts Rock Beach in the North.  The sand is almost white and the water turquoise.  The beautiful view is spoiled a little by the industrial buildings and factories that you will see to the North and South.

When we went there, we were only two of a handful of people on the beach.  So, we spent a very relaxing day on the beach with lots of sunbathing and snorkeling. 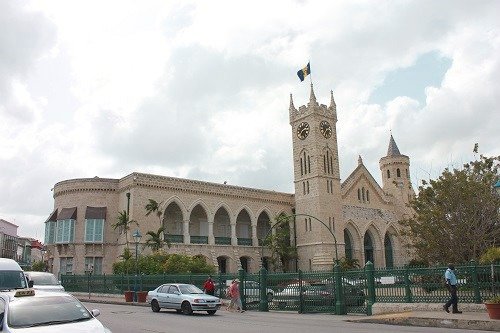 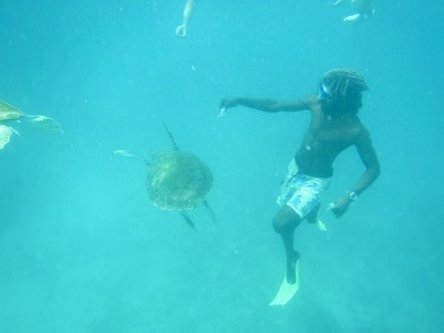 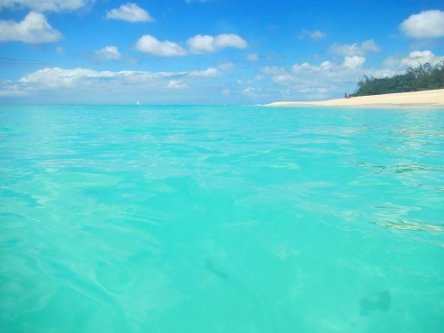 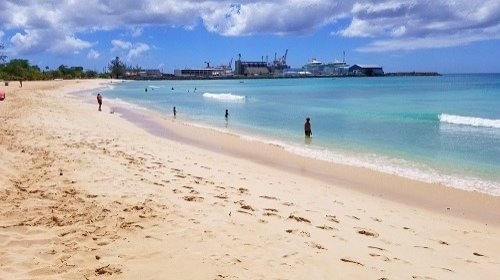 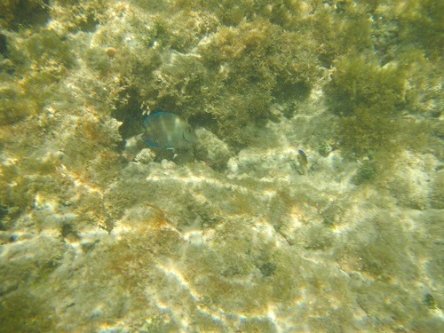 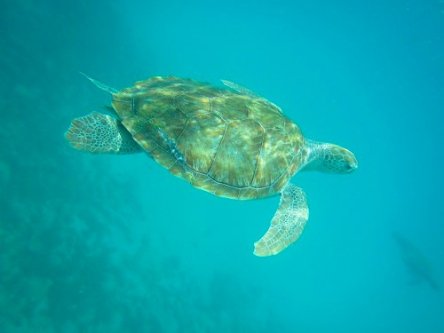 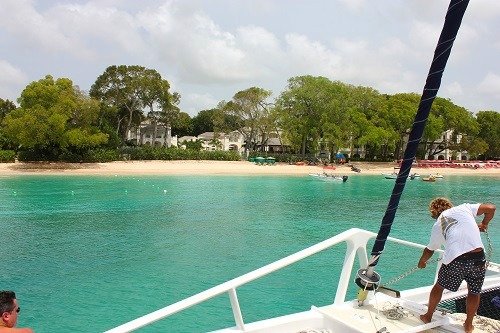 On our first trip to Barbados, we did a “swimming with turtles” catamaran tour and a self-guided walking tour of Bridgetown afterwards.  On our second trip we finally wanted to see one of the white sand and turquoise water Barbados beaches.

On the catamaran were probably 20 other tourists and 3 crew.  The bar on board was a well-stocked; all drinks and buffet-style lunch were included in the price.  The first stop was swimming with the turtles.  Our guides and guides on other ships fed the turtles to attract them to the boats.  Swimming with turtles is a great experience – the turtles are very curious and gentle creatures.  The second stop was a snorkeling stop with lots of colorful fish and a beautiful beach and turquoise water. 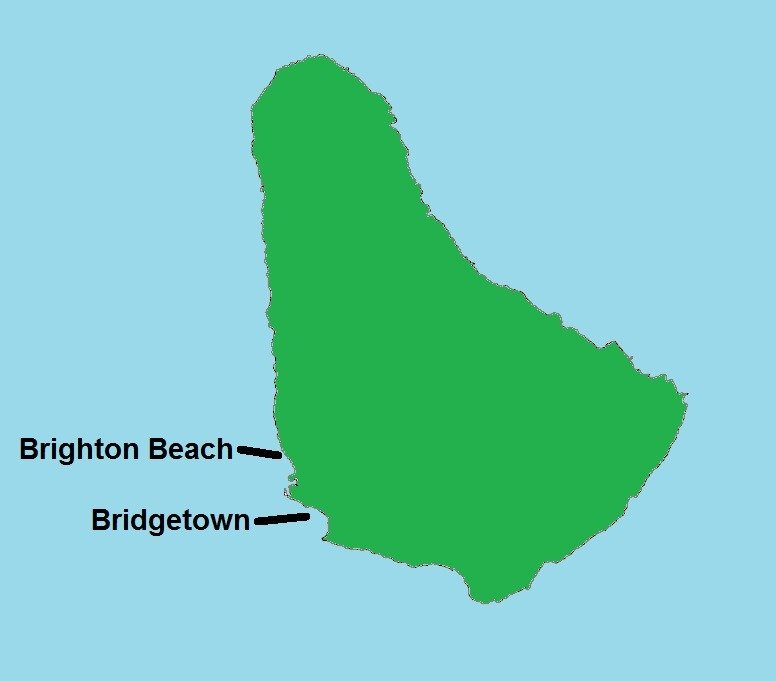 Check out my reviews of other Caribbean islands. and Rudy's Cruise Guide. 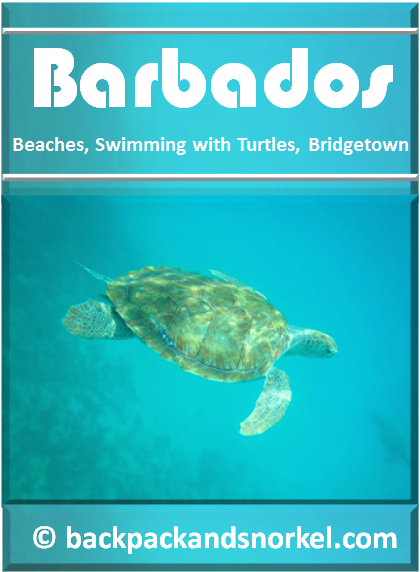 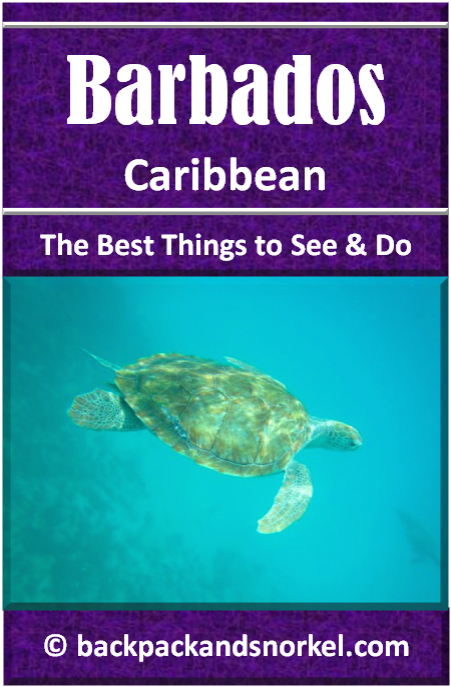 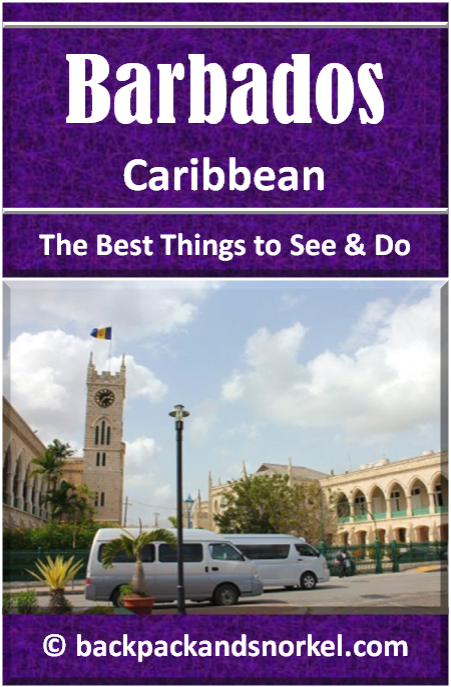 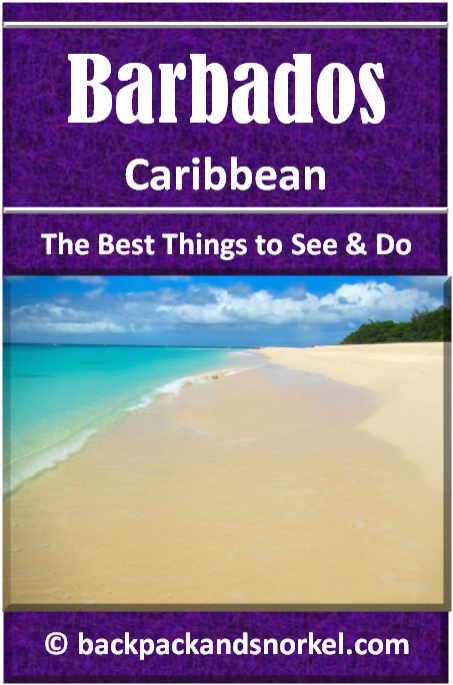 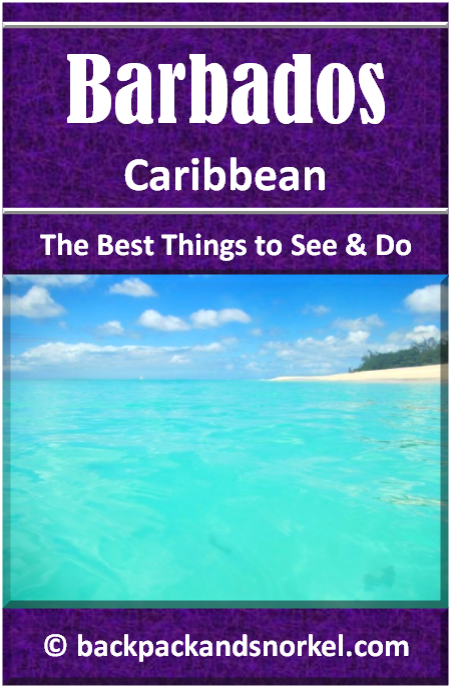 Other Things To Do

Some cruise passengers prefer to go to The Boatyard Club which is a private beach where you pay an admission and
get access to a beach chair, shared umbrella, ocean trampolines, ocean slide, dive platform, rope swinging, boat tour with snorkel gear and life vest to a ship wreck for snorkeling and swimming with turtles, free wifi, fresh water showers, restrooms and changing area, basketball nets, beach vollyball and bag toss.  There are also a restaurant and bar.

Barbados has a moderately tropical climate with a dry season from December to May and a wet season from June to December.

It is located ouside the principal hurricane strike zone.  On average it is hit by a major hurricane every 26 years.

The average temperatures and rainfall are shown here: 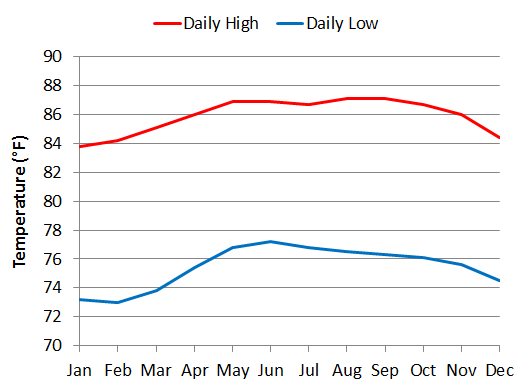 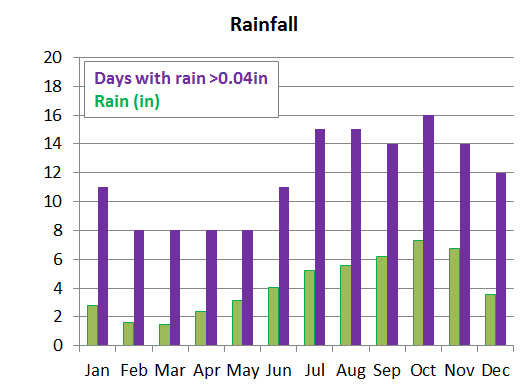