The best things to see & do in Vermont

Vermont is the 2nd least populated state in the US and it is called the Green Mountain State.  Driving through Vermont in summer, you will see seemingly endless green pastures, cattle and hills.  The scenery changes dramatically in fall when the foliage changes to spectacular hues of yellow, orange and red.  In winter, Vermont becomes a winter wonderland and skiing is the name of the game.

If you are a hiker or kayaker, then you can spend weeks here.  For most visitors, one week will give you a good feeling for this state. 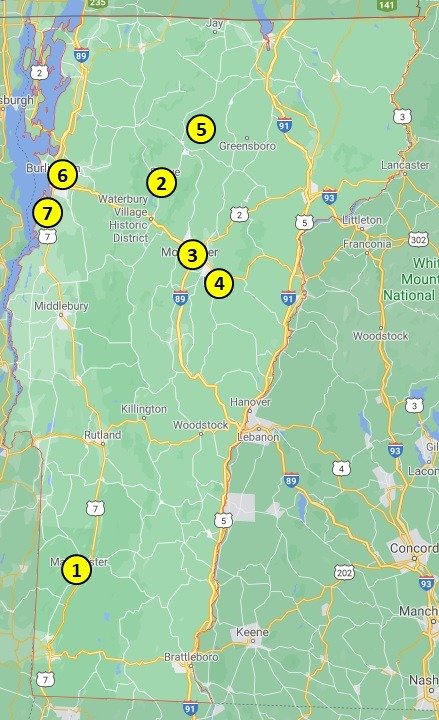 Here is what you will find in this article

Vermont is located in the New England region of the US and it is the 2nd least populated and the 6th smallest state (by area) in the US.  Burlington is, by far, the most populous city with a population of approx. 42,000 people.  Lake Champlain is the 6th largest body of fresh water in the US.

Vermont’s Green Mountains run north-south through the state.  The highest elevation is Mount Mansfield at 4,395ft (1340m) above sea level.

The name Vermont is a shortened and anglicized version of “montagne verte” (green mountains).

French explorer Jacques Cartier was likely the first European who saw Vermont in 1535 and in 1609 Samuel de Champlain claimed the territory as part of New France.

Fort Sainte Anne on Isle La Motte was the first European settlement in Vermont.  It was erected in 1666 by the French.

After France lost in the “French and Indian War”, the 1763 “Treaty of Paris” ceded what is now Vermont to the British.

In 1764, King George III established the border between New Hampshire and New York which both states refused to accept.  In 1770 Ethan Allen, who nowadays is Vermont’s most highly celebrated hero, formed a militia known as the Green Mountain Boys to protect the interests of the locals.

In January 1777, Vermont declared its independence and called it the “Republic of New Connecticut” and changed the name in June 1777 to “Vermont”.

On July 8, 1777 Vermont adopted its constitution.  This is significant as this was the first written constitution in North America that banned adult slavery by stating that male slaves become free at the age of 21 and females at 18.

The Continental Congress of the US refused Vermont’s admission to the US until 1790, when Vermont became the 14th state of the union.

In the years in between, Vermont was an independent country with its own currency and Windsor, VT as its capital. 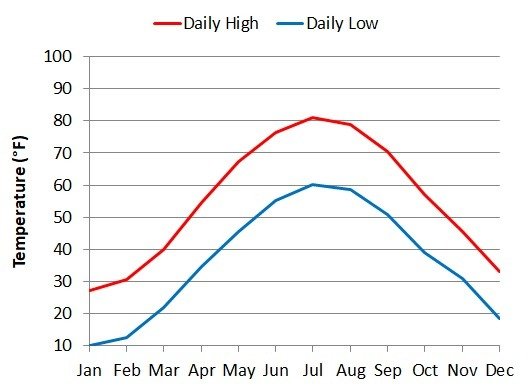 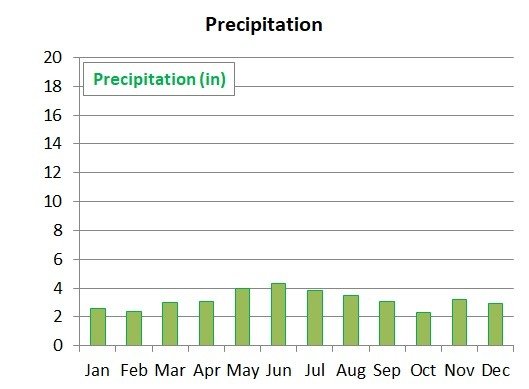 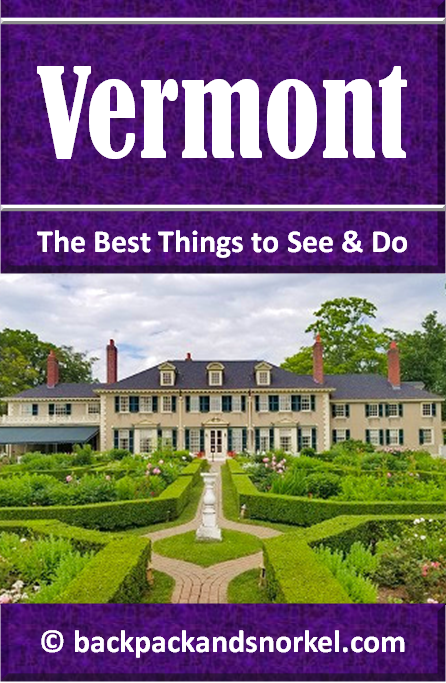 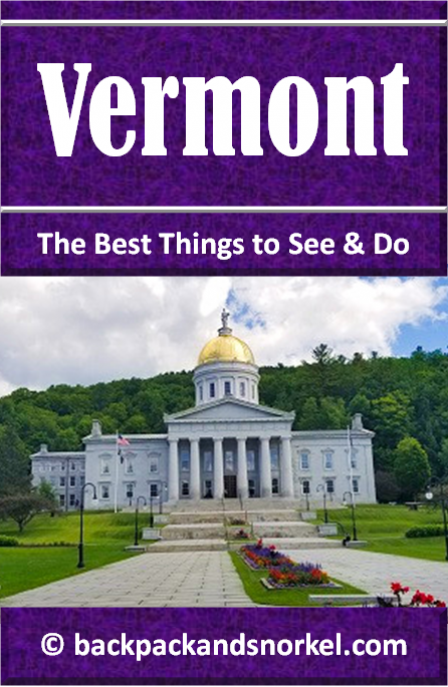 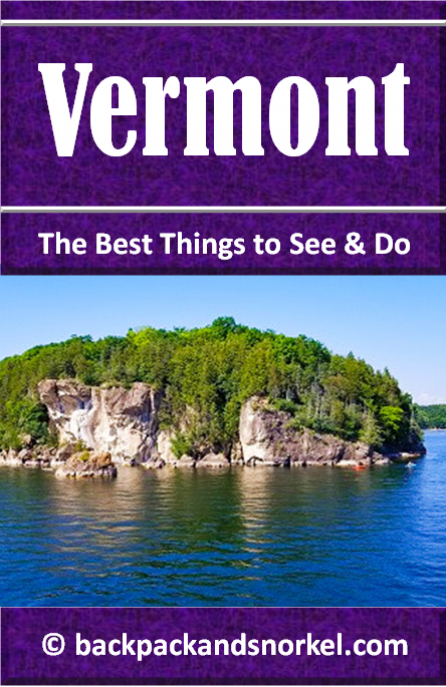 Due to the differences in elevation and proximity to Lake Champlain, the climate differs somewhat in different places in Vermont. Overall, the climate is characterized by warm & humid summers and cold & snowy winters.

Due to its location on Lake Champlain, Burlington, VT sometimes sees localized snow squalls which produce up to 13 inches (33 cm) of snow within 12 hours.

Here is the climate that you can expect to see when you visit Vermont:

Visit Hildene and afterwards enjoy a walking tour through Manchester.  Then drive to Stowe for a quick walking tour and then settle in your hotel in Stowe Township.

Start your day at the Ben & Jerry’s factory with a factory tour and sampling of their ice cream.  Afterwards visit Cold Hollow Cider Mill and learn how they make apple cider and other apple products.  Then visit the Alchemist Brewery and try some of their beer.  When you are done, drive to Montpelier for a visit of the Bragg Farm Sugar House.  Afterwards find a restaurant in downtown Montpelier and go to your hotel.

Enjoy nature in the afternoon.  We went to Green River Reservoir State Park where you can swim or boat if you bring your own boat as no rentals are available, there are no hiking trails.  We brought our inflatable kayak and enjoyed kayaking for a few hours.  If you are into hiking, then Lake Willoughby is a much better option for you.

Afterwards, get back to your car and drive to the Burlington area where your next hotel awaits you.

Start your day with a stroll at the Lake Champlain waterfront before it gets too busy and all the parking spaces in the area are taken.  Afterwards, visit Lake Champlain Chocolates Factory to learn how they make chocolate, get a free sample and maybe buy some.  As you are nearing lunch time, drive by the World's Tallest Filing Cabinet on your way to Church Street Marketplace where you will find lots of wonderful restaurants to eat lunch.  Then, make your way back to Lake Champlain for a cruise on the Spirit of Ethan Allen III.

Use the evening to explore Burlington at night and go back to Church Street to see it illuminated after dark.

We started our day by going to North Beach where we unpacked our inflatable kayak and paddled on Lake Champlain for a few hours seeing the Ethan Allen III cruise that we had been on the day before.

If you like, you can rent kayaks and paddleboard here.  Instead of boating, you can swim here or sunbathe on the beach.

Alternatively, you can visit the Ethan Allen Homestead in the morning.

Afterwards, drive south to Shelburne where the Vermont Teddy Bear Factory waits for your visit.  No worries, the factory tour is wonderful for the young and the young at heart.

If you visit on July 3, which is the day when Burlington has their 4th of July fireworks, either take a bus to crowded downtown Burlington or just go to Oakledge Park to watch the sunset and fireworks afterwards.

Today is reserved for the Shelburne Museum.  This vast museum justifies at least a half-day visit.

If you plan to continue your travels to the Adirondacks in New York, which you should, then you may want to use the ferry to New York State.

This ends the six day tour of Vermont highlights.