Saint Lucia is an island country in the Caribbean Sea.  It covers 238 square miles (617 square km) and the poupulation is approx. 165,000.
The native Arawaks called the island Louanalao or Iyonola and the Caribs later Hewanorra.
Interestingly, St. Lucia (which is named after Saint Lucy of Syracuse) and Ireland (named after the Celtic goddess of fertility Eire) are the only two countries in the world that are named after women.
The French pirate François Le Clerc, nicknamed Jambe de Bois (= "wooden leg") was the first European to settle on Pigeon Island (today part of St. Lucia) to attach passing ships.  Initial attempts by the Dutch and British to settle St. Lucia failed due to attacks from the Caribs until the French West India Company purchased the island from the Caribs.
Over the years France and England ruled the island 7 times each until the British took final control in 1814.
In 1979, St. Lucia became independent, but stayed in the British Commonwealth.

St. Lucia has a tropical rainforest climate which is moderated by trade winds from the North East.  The dry season lasts from December to May and the wet season from June to November.  The temperature difference between day and night is larger than that between the dry and the wet season.  Here is an over view of the average temperatures and rainfall that you can expect:

The tour starts in Castries, the capital of St. Lucia.  It does not make any stops in Castries, but notable sights are:
Derek Walcott Square: This park has had many names in its history and is now named after the local poet and 1992 Nobel laureate Derek Walcott.
On hot days you will appreciate the shade under the large Samaan tree (locals call it "Massav") which is said to be over 400 years old.
Bordering the park to the east are the Cathedral Basilica of the Immaculate Conception which is the largest church in the Caribbean (200 ft (61 m) by 100 ft (30 m)) and the Castries Central Library to the west.

Tourism is highly important to St. Lucia and the majority of tourists arrive as part of a cruise.  Please also check out Rudy's Cruise Guide for Beginners & Others.

The best things to see and do in St. Lucia for cruise ship passengers

Cruise ships dock in Castries.  It is a short walk into town from the cruise port.  Beaches can be reached by excursion or taxi.

The best beaches of St. Lucia are:

The best snorkeling in St. Lucia can be found here:

As there are so many unique sights to see, like the drive-in volcano and the Pitons, we booked a guided sightseeing tour with Cosol Tours (http://www.cosol-tours.com/tours.html) to ensure that we see the island highlights.  The tour took most of the day and was absolutely wonderful and informative.

The bext stop is at St. Lucia's largest banana plantation.  The name of the plnatation escapes me.  Here you will join a brief tour on the roadside where the guide shows you bananas in various stages of tehir development and some other fruits that they plan and harvest.  They also explain why you see so many blue bags.  And, of course, you get to try a fresh banana.  Let me tell you, fresh bananas taste much better than the store riped bananans that you buy at home.

The next stop is a very brief one at a beautiful scenic overlook of the beach and small fishing village of L'Anse La Raye.

The last extended tour stop is the Toraille Waterfall.  You hike through the rainforest to get to the waterfall and the water pool in front of it.  This is your last chance to get wet. 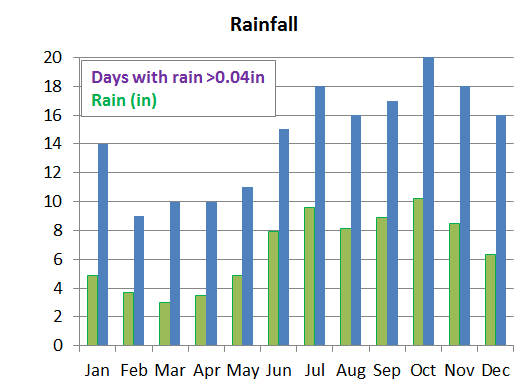 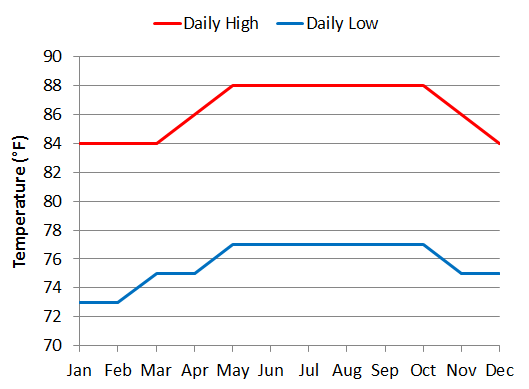 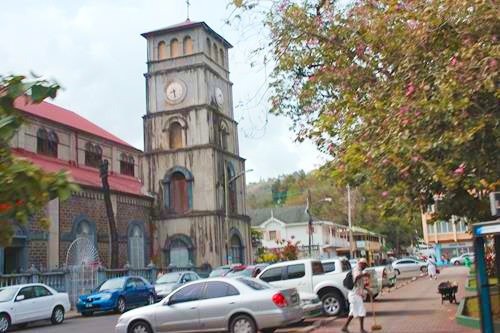 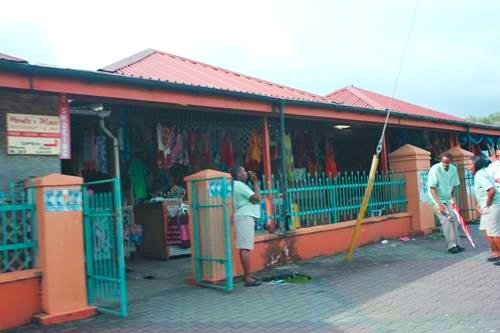 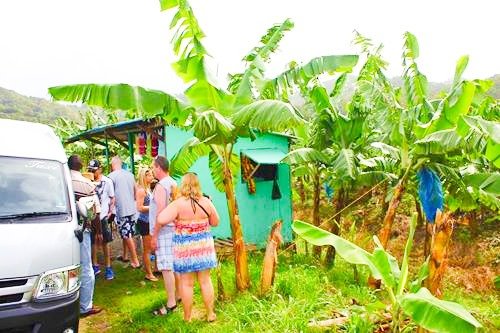 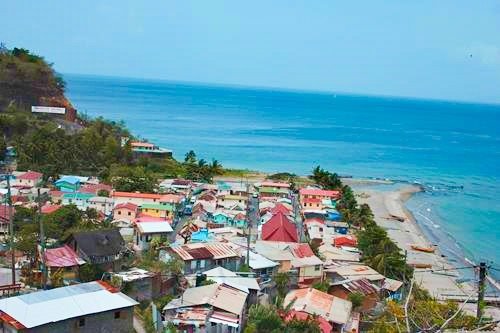 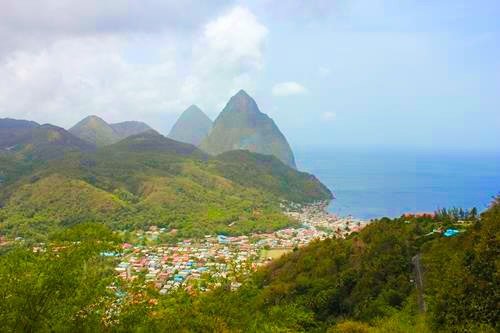 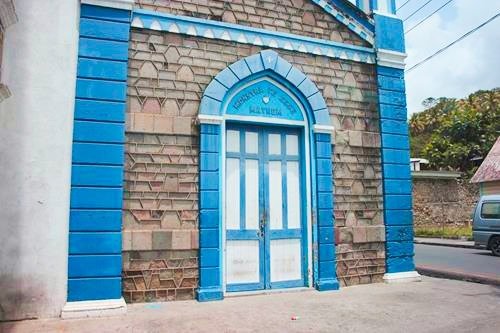 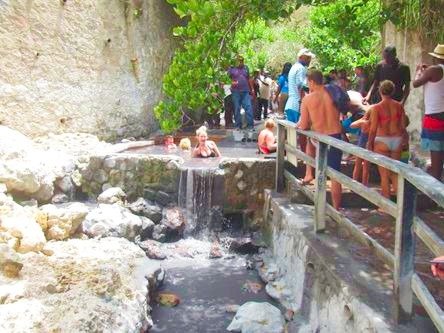 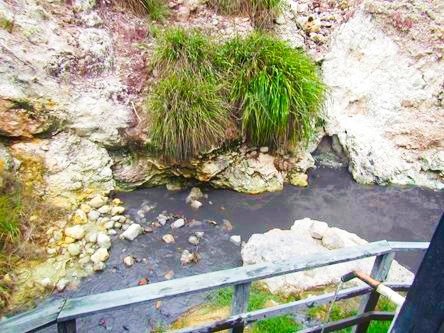 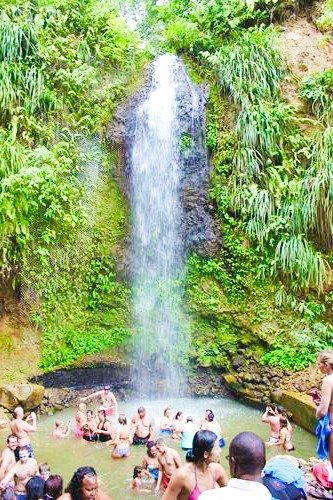 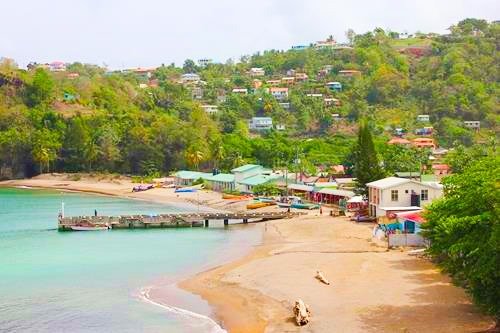 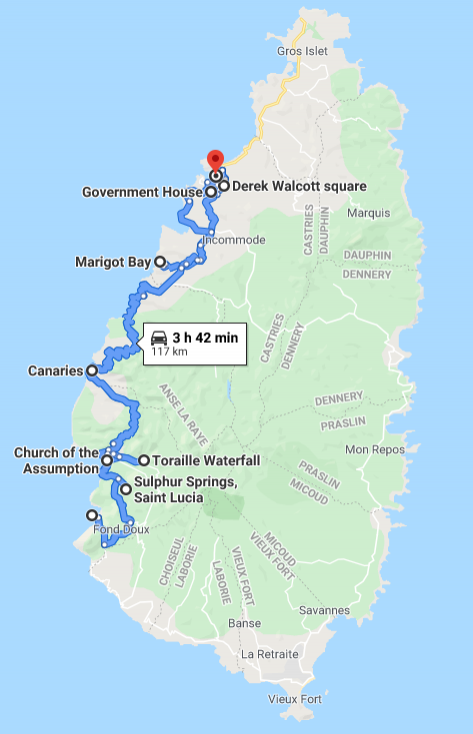 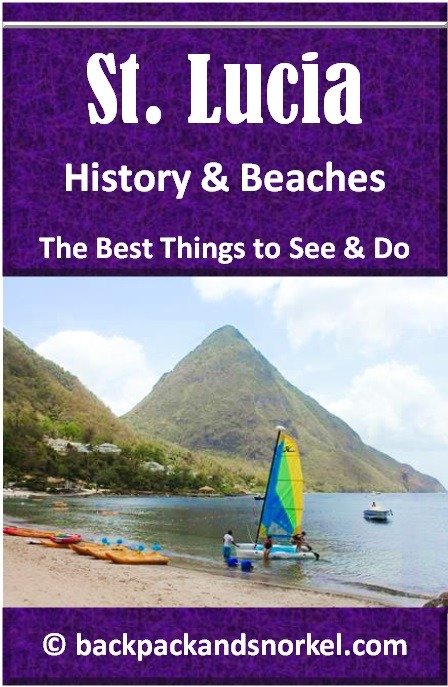 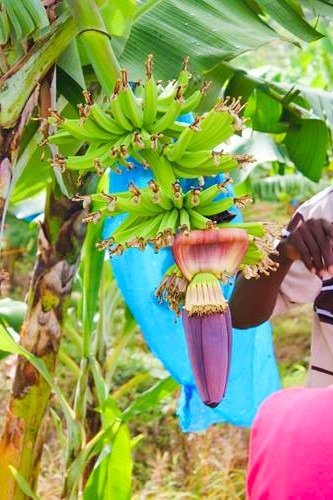 Then it goes back on the road towards Soufriere with a short stop at a scenic overlook from where you can see Soufriere and both Pitons.

Driving through Soufriere and passing the Church of the Assumption with its painted blue highlights to the beach.

At the beach in Soufriere you will be transferred into 1 or 2 speed boats that bring you to beautiful Jalousie Beach between the two Pitons.  The boat ride is fast and there is lots of water spray.  Make sure to protect your cameras and everything that should not get wet.
Fun Fact: the sand at this beach was originally black and you can still see it when you go into the water.  To make the beach more attractive to tourists, the resort that operates here and to which all the longers below brought in tons of white sand.
Snorkeling here is fairly nice.  You will not find tons of fish and colorful vegetation, but the fish you see are mostly colorful.

The first stop is Morne Fortune.
Located high up on the hills south of Castries, you have a fabulous view of the scenic northern side of St. Lucia including Castries, its Harbour and your cruise ship.  You will also see the historic Government House here, which is the official residence of the Governor-General of Saint Lucia.  Tours are by appointment only. 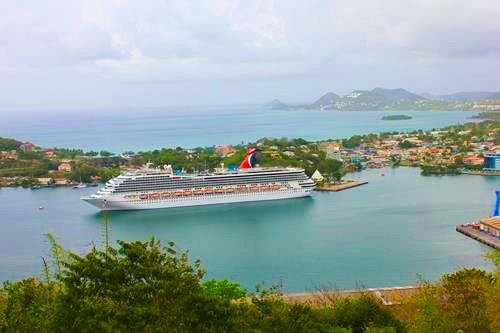 To the southwest lies Marigot Bay.  We stopped here for a wonderful view of Marigot Bay, where the movie Dr. Doolittle was filmed, and Marigot Bay Arch. 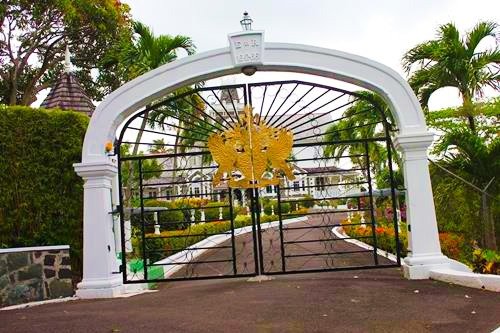 Here are some more photos taken from various places in St. Lucia: 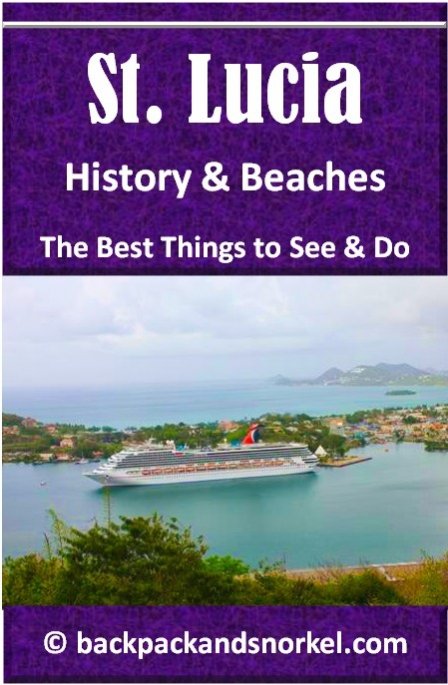 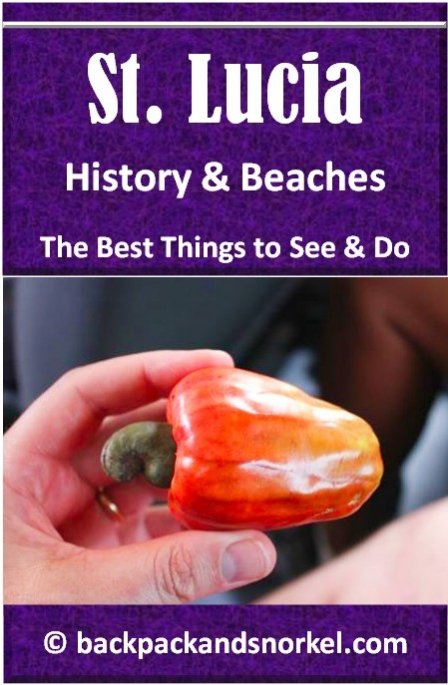 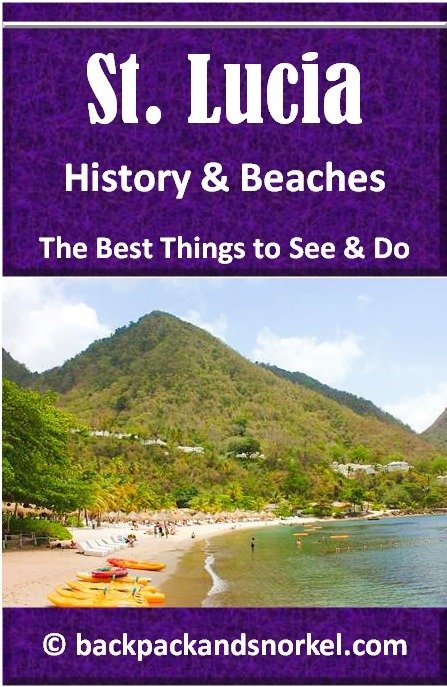 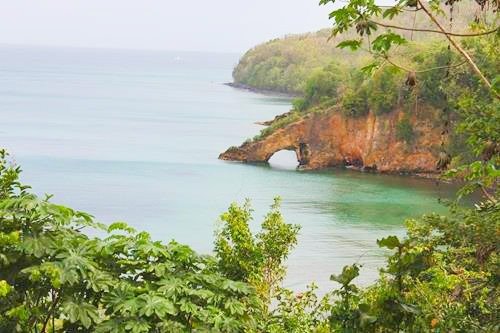 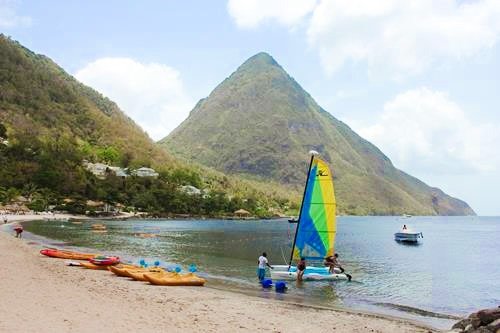 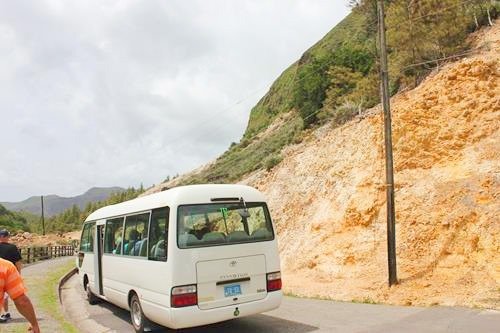 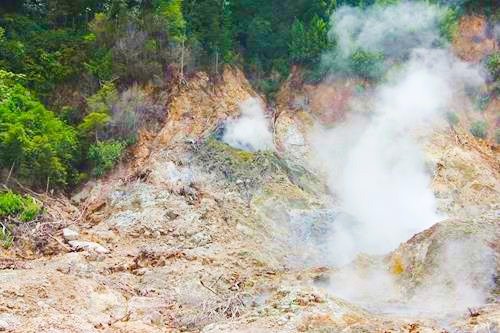 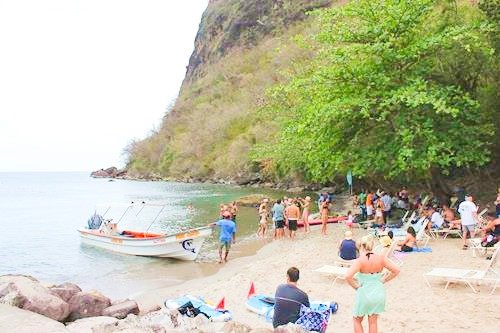 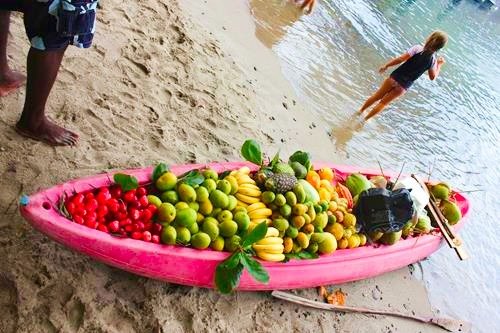 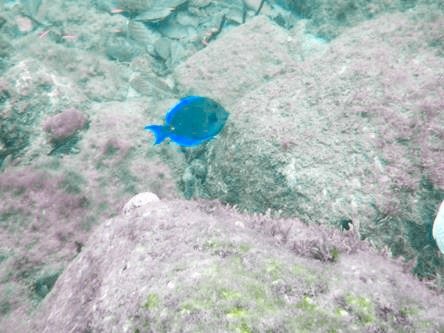 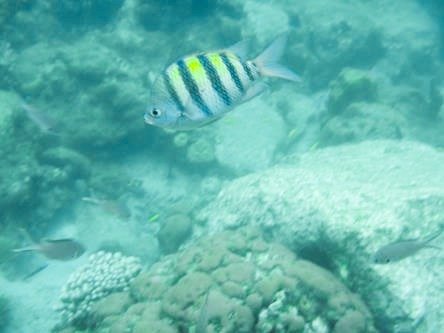 After a some nice snorkeling and sunbathing on the beach, you go back to Soufriere on the speed boats and to the next highlight: Sulphur Springs - the Caribbean's only Drive-in Volcano!
On the way to the mud baths you pass several natural holes in the ground through which white smoke with a rotten egg smell escapes.  If you desire, you can go and change your clothes to take a hot mud bath of which people claim your skin will look 20 years younger afterwards.  Well, my wife did it and I can confirm she looks so much younger than I do.
There are showers to wash the mud off and when you are done, then the tour goes to the next highlight. 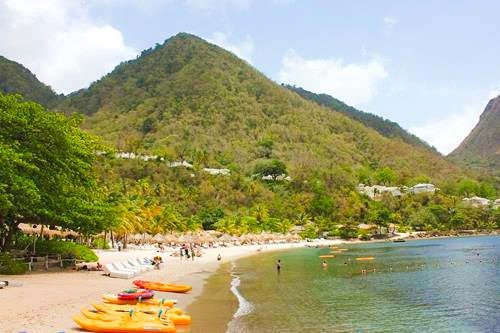 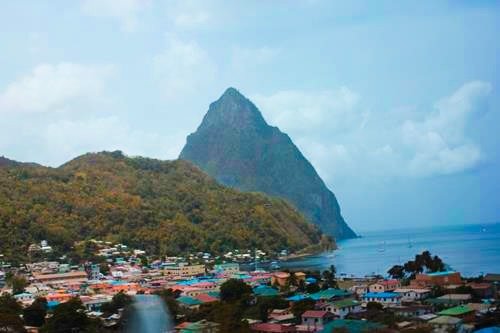