This Backpack and Snorkel Iceland Travel Guide provides a detailed itinerary for Self-Driving the Golden Circle in Iceland so that you can make memorable moments on a relaxing vacation in Iceland.

What is the Golden Circle and why is it so popular?

One of the first things people will likely tell you to do in Iceland is the Golden Circle Tour.  It is one of the major tourist attractions in Iceland for a good reason as the Golden Circle tour is designed to connect 3 major sites close to Reykjavik: The Þingvellir National Park, the Geysir Geothermal Area, and the Gullfoss waterfall.  Besides those 3 major attractions, there are several other sites worth seeing on the tour.  Depending on who you ask, some people or tours will include some or all of these additional sites.

Most people decide to do the Golden Circle tour in one day and this is absolutely doable.  Just rent a car and start driving.  The roads are in excellent condition and a regular sedan is fine.  Alternatively, you can join a guided tour.

Before I give you a detailed description of a 1-day self-driving tour of the Golden Circle, I like to make you aware of all my posts about Iceland's wonderful and rugged country.

The settlement of Iceland began in 874AD with the Norwegian chieftain Ingólfr Arnarson being the first permanent Norwegian settler on the Iceland.  Over time, the population grew and Ingólfr Arnarson's descendants became the most influential and powerful family.   To limit their power, other chieftains convinced them to establish a general assembly.  The search for a suitable location was on.
Coincidently at almost the same time, the owner of what is now Þingvellir was found guilty of murder and his land declared public.  Due to its availability and accessibility by the chieftains and their staff, the surrounding cliffs providing a natural amphitheater, the lake providing water and fish and the grassy landscape providing the ability to graze their horses and build encampments, this location was chosen.

Today, the first parliamentary proceedings in the summer of 930AD where the groundwork for a common cultural heritage and national identity of Iceland was laid, are seen as the foundation of the Icelandic parliament.

From 930AD to 1271, the Alþingi (parliament) at Þingvellir was Iceland's highest legislative and judicial authority, its parliament and supreme court. It became the center of Icelandic culture and every year people (sometimes thousands) would travel to Þingvellir for the 2 weeks the Alþingi was in session.  They would set up temporary buildings as there were no permanent buildings at that time, besides a farm and, later on, two churches.

Besides the people involved in the assembly, ordinary people like merchants, artists, entertainers and craftsmen who would sell their goods and services, gathered here.  There were apparently even ale makers who brewed beer.  As Þingvellir was a meeting place for everyone in Iceland, it laid the foundation for a common language, law, and culture and made everyone feel of being part of the same nation.

Over time, however, power hungry chieftains and other disputes resulted in clashes and eventually brought Iceland under Norwegian rule.  The legislative and judicial authority remained with the Alþingi at first, but was slowly but surely transferred to the Norwegian and later Danish crown.  The Althing held its last session at Þingvellir in 1800, after which it was discontinued.  In 1844 the Althing was restored in Reykjavík, where it is located until today in the Alþingishús.

Because the Althing is back in existence today, it is considered the oldest surviving parliament in the world.

We started our one-day Self-Guided Golden Circle tour in the morning from our hotel by the airport.  The map below shows where we went; if you click on the map, then you will be taken to google maps with more details.

The Great Geysir and Stokkur

The Haukadalur geothermal area is home of Iceland's most famous geyser Strokkur (means "churn"), The Great Geysir and other geothermal features like mud pots, hot springs, and fumaroles.
While the Haukadalur geothermal area is active for approx. 10,000 years, hot springs were only reported after a series of earthquakes in 1294.
The word Geysir was first mentioned in the 18th century; its origin lies in the Old Norse verb "geysa" which means "to gush".
It is said that Geysir reached a height of 560ft (170m) in 1845.  In 1846, however, Robert Bunsen was researching Geysir and he reported eruptions of 148-177ft (45-54m).  Through his research, Bunsen was able to find and explanation on how the geyser works.
Until now, earthquakes and man-made activity like digging ditches and adding soap have led to Geysir becoming more and less active and in 1916 activity stopped completely.

Nearby Stokkur is much more active and erupts every 5-10min while The Great Geysir rarely erupts anymore.
Stokkur is much younger; it was created through an earthquake in 1789.  Like Geysir, it has had more and less active periods.  It is said that its eruptions in 1815 reached 200ft (60m), which is 3 times higher compared to its height these days.  At the turn of the 20th century, another earthquake blocked the conduit and eruptions ceased until locals cleaned out the blocked conduit in 1963.

Raufarhólshellir is the 4th longest lava tube in Iceland.  As visitors had destroyed almost all of the fragile lava straws and left lots of trash, the cave was closed in 2016 and early 2017 to repair damage, clear out several metric tons of trash and install a walkway and lighting.  The cave is now open only for guided tours.

Raufarhólshellir formed about 5,600 years ago from a lava flow of the Leitahraun eruption about 6 miles (10 km) uphill from the cave.

Since we were in the area, we decided to end this perfect day with a dinner at the highly recommended Fjoerbordid Seafood Restaurant in the tiny town of Stokkseyri.  Before we went into the restaurant, we took a quick walk on the levee to enjoy the beach and beautiful sunset.

Being an episcopal see made Skálholt an important center of religion, learning, culture and power and in 1075, Adam of Bremen described Skálholt as Iceland's "largest city". 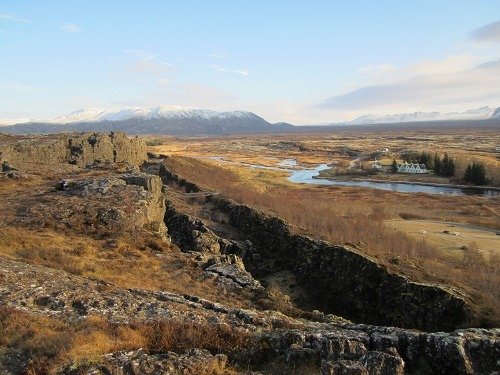 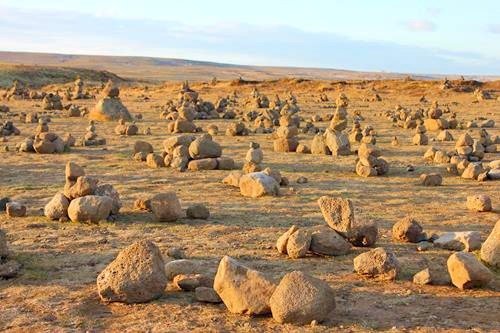 Iceland is a beautiful and rugged country.  Below are some photos that we took 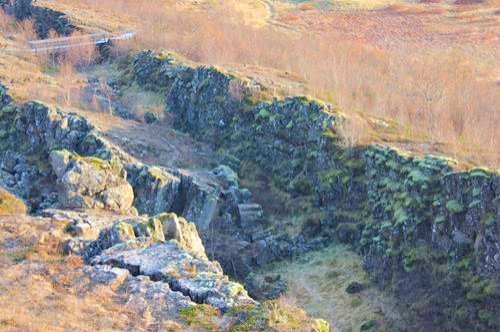 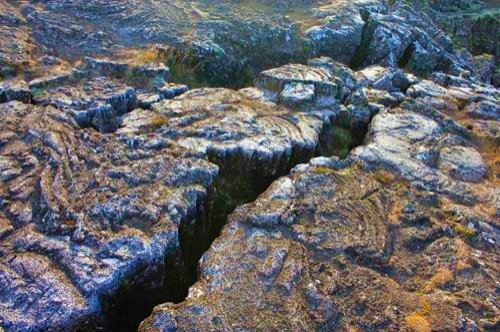 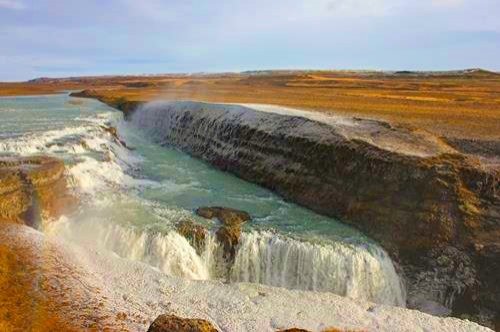 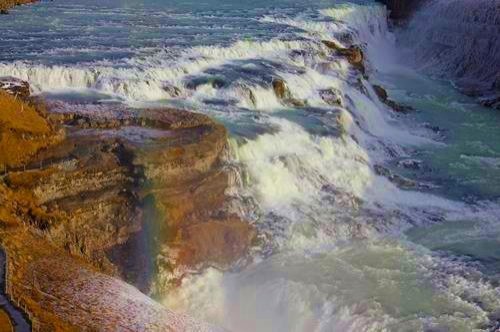 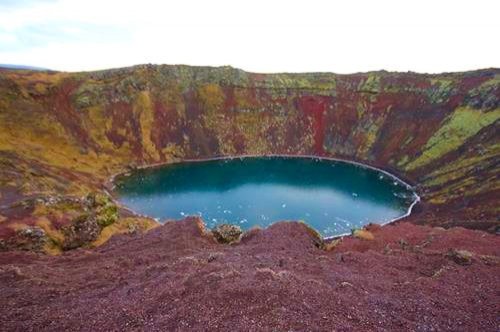 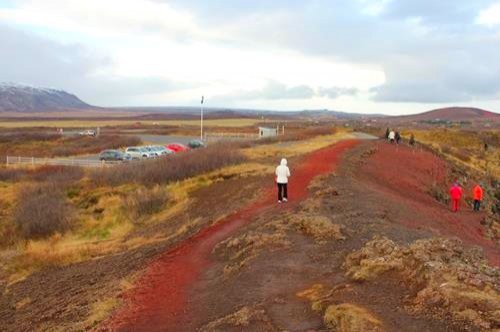 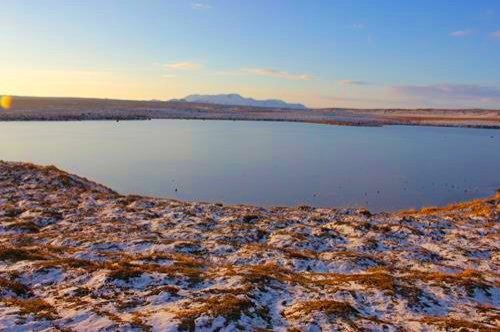 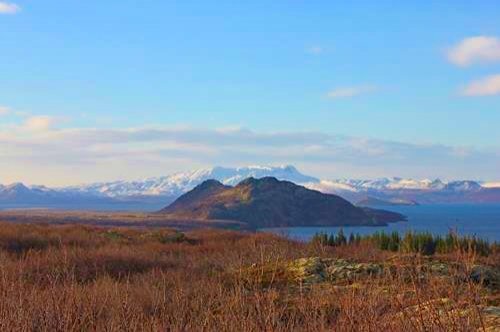 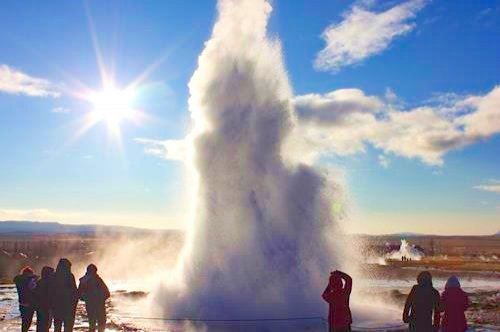 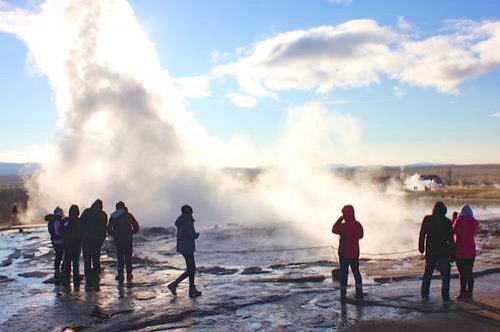 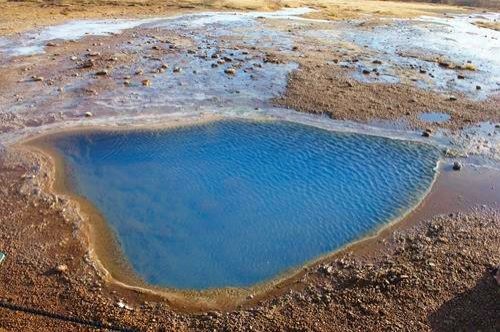 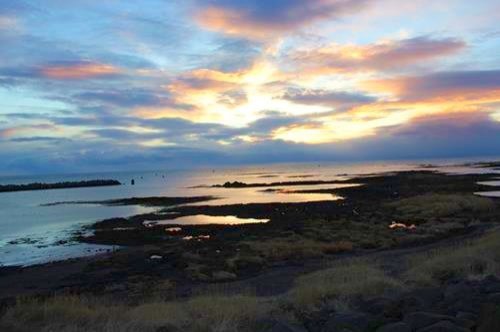 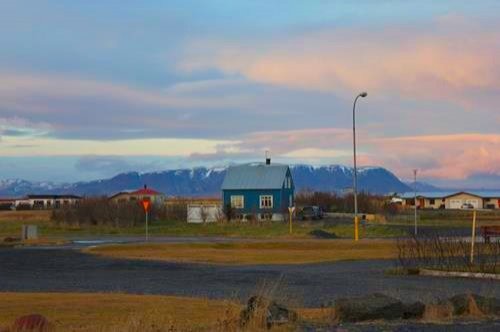 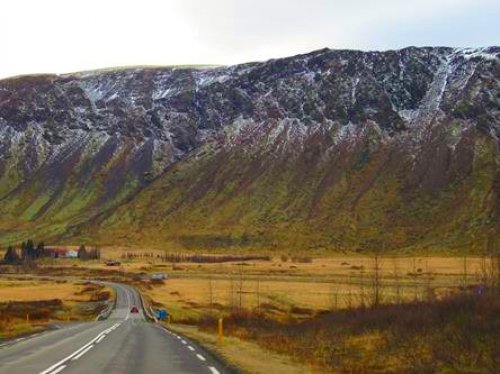 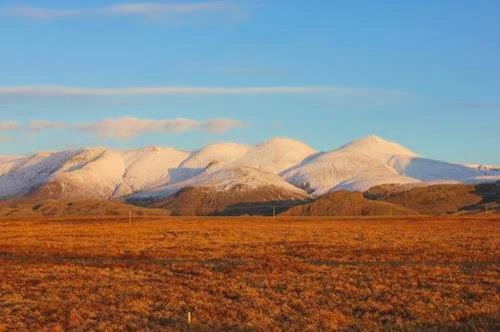 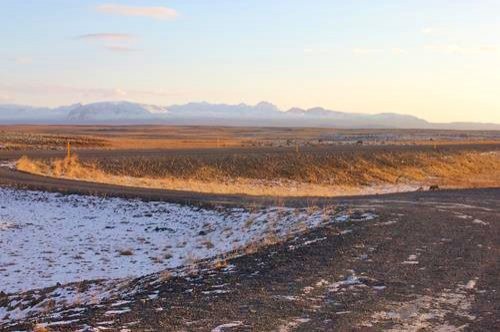 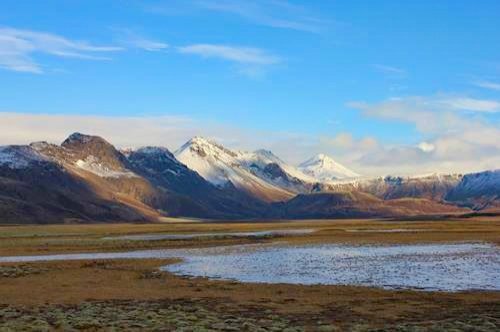 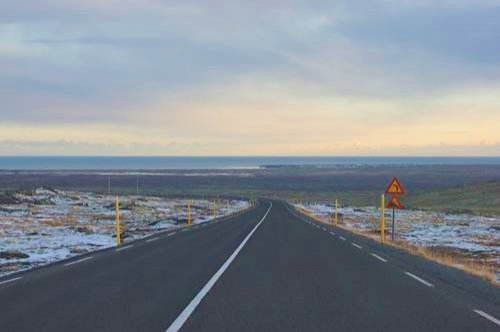 Þingvellir National Park is also a place where cracks in the earth's surface are silent witnesses of the continental drift between the North American and Eurasian plates.  The largest crack (fault) is Almannagjá, which is actually a canyon.  The tectonic plates keep moving and result in Iceland growing by 0.8in (2cm) per year.  As a result of the movement, you may feel small earthquakes every now and then.
Some of the faults have filled up with water over time.  The water is so clear that you can snorkel and dive in them.  The Silfra fissure is probably the best known snorkeling site.  I just find it amazing to know that you are diving between the tectonic plates of North America and the Eurasian plate.
It was too cold when we were there, but if you feel like it, go ahead and join a guided snorkeling tour and let me know how it was.

Another fissure, Nikulásargjá, is known as the "coin fissure".  It started when King Frederick VIII of Denmark was visiting in 1907 and visitors began throwing coins from the bridge that was built for the king.

When you are done exploring this site, get back to your car and head East on route 36 towards Geysir, drive until you hit route 361 and make a right turn on this road until you get to the church that you saw from the viewpoint.  Get out of the car and visit the church and enjoy the cliffs with the waterfall and the scenery in general.

When you are done exploring this site, get back to your car and route 36 and head East towards Geysir.  You will soon see beautiful lake Þingvallavatn.  Keep driving and turn on route 365 to get to Geysir and the route 37 and 35.  Don't worry, there are signs directing you where to go.  Just make sure you don't miss them because your eyes are glued to the beautiful scenery that you are passing through.

When you visit Gullfoss, consider yourself lucky that you can see the waterfall in all its natural beauty.  In the early 20th century, there were plans to use Gullfoss to generate electricity. Luckily, the investors were unable to secure enough funds to realize the project and the waterfall was eventually sold to the government which turned it into a protected area.
A likely untrue story is that Sigríður Tómasdóttir, the daughter of Tómas Tómasson, threatened to throw herself down the falls in order to save it from development.  Nevertheless, she did a lot of other things to preserve the falls and a stone memorial above the falls commemorates her and her efforts.
The Gullfoss waterfall is formed by the Hvítá river flowing down a three-step staircase and then plunging down in two stages into a crevice that is perpendicular to the flow of the river.
In summer, the average amount of water going over the waterfall is 4,900ft3 (140m3) per second.  The volume goes down in winter to about 2,800ft3 (80m3) per second.

Kerið Crater is believed to be a cone volcano which erupted and the collapsed into its empty magma reserve.   The water at the bottom of the crater is at the same level as the water table of the surrounding area and therefore not caused by rainfall, but groundwater.

Kerið Crater is one of several crater lakes in Iceland's Western Volcanic Zone, which was formed when the land moved over a localized hotspot.  The caldera is the same red color as the other volcanic rock in the area and it measures approx. 560ft (170m) x 890ft (270m) across and 180ft (55m) deep.  The water is fairly shallow and only 20-50ft (7-14m) deep.  Its deep color is caused by minerals dissolved in the water.

Kerið Crater is about 3,000 years old, which makes it half the age of most other volcanic features in this area.

If you want to hike down to the water, you can do this as one of the walls is less steep than the others.  The crater is privately owned and you will need to pay admission.

nlterested in more artcles about Iceland? 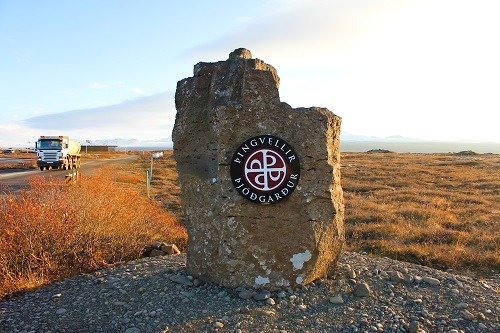 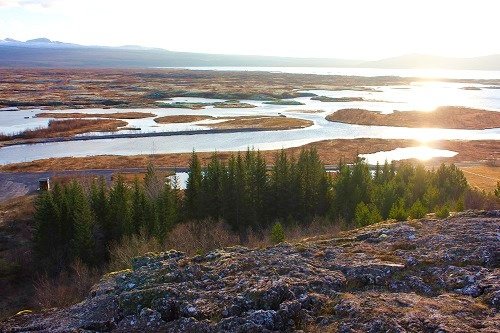 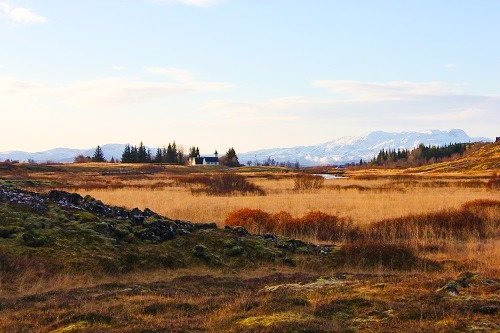 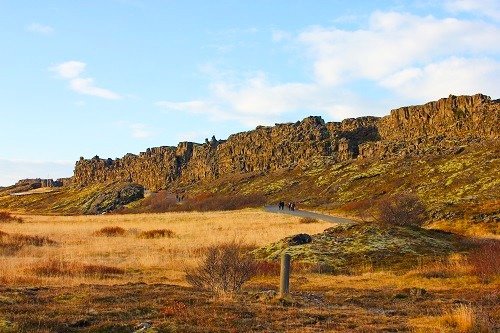 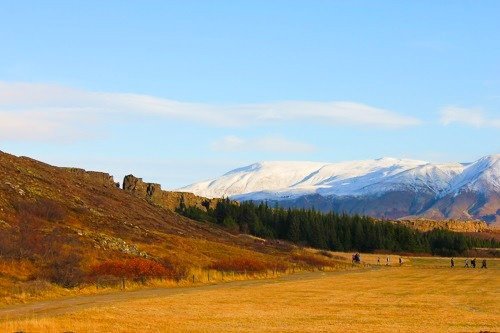 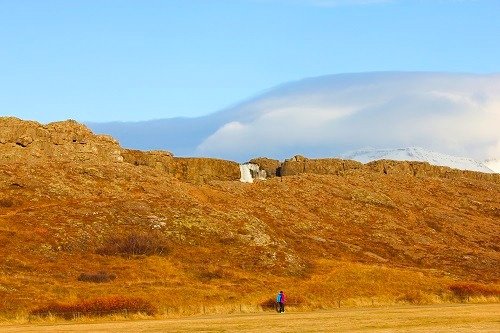 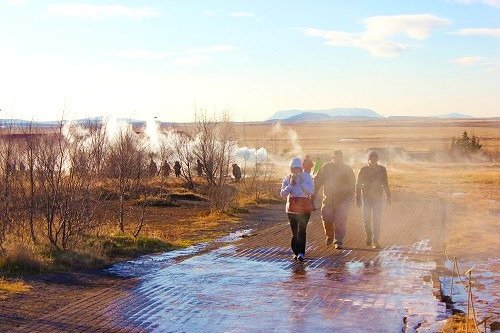 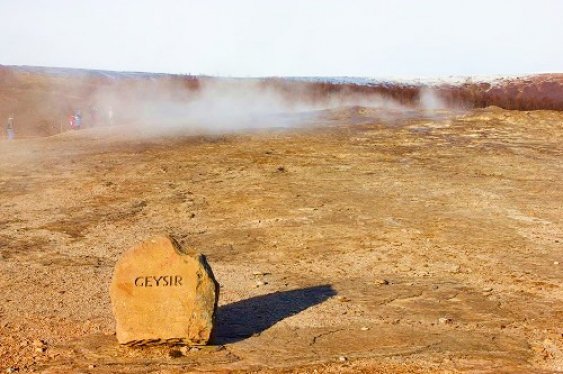 If you have time, you can consider a detour to the Nesjavellir Geothermal Power Station (NGPS), which is the second-largest geothermal power station in Iceland. 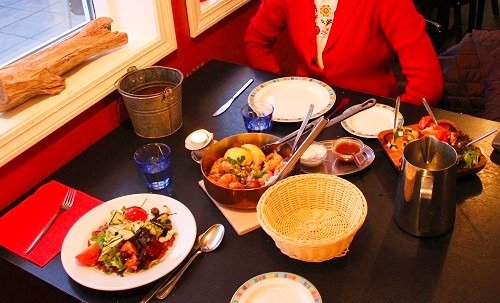 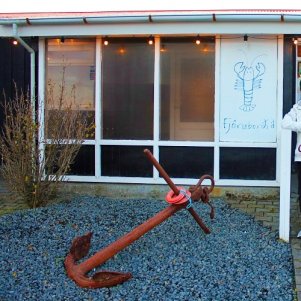 Please feel free to use the following pins for Pinterest: