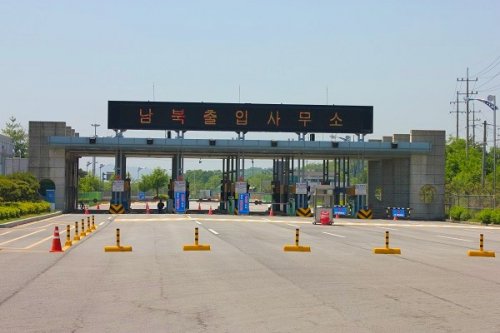 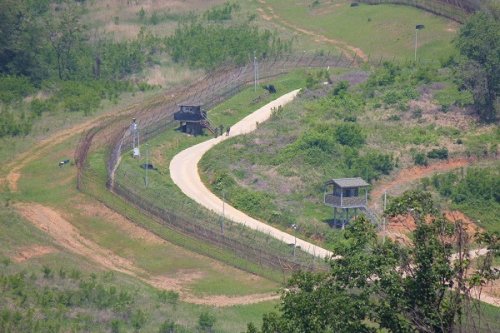 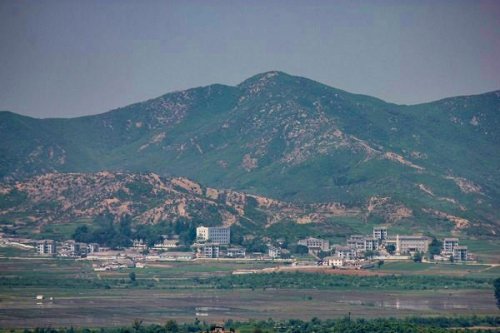 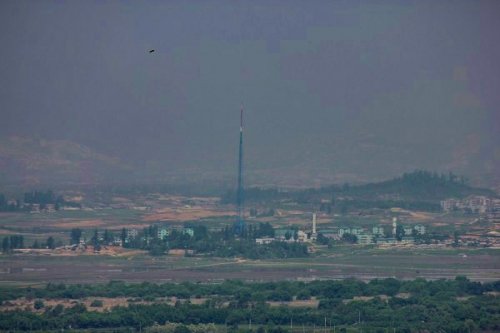 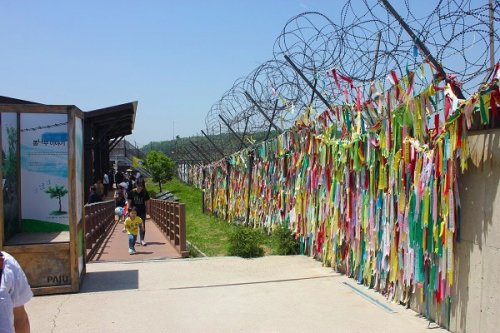 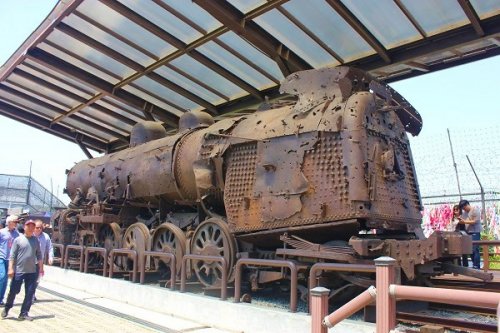 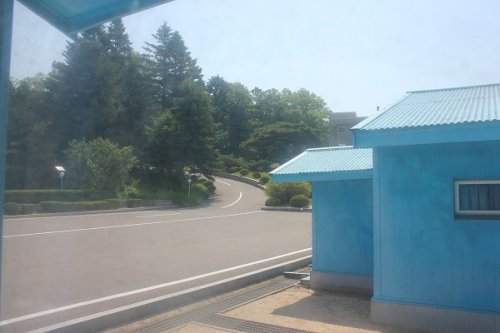 Interesting fact:  I was on the morning tour.  We were later told that later tours were cancelled as the South Korean President and the North Korean leader met in the Military Armistice Commission Conference Room only two or so hours after my tour group was there.

because of tensions between the two Koreas, South Korea closed access to the Kaesong Industrioal Complex.

The next stop was the Dora Observatory, which is the viewing platform closest to the North Korean border.  From the observatory, South Korean military outposts near the border, the North Korean Propaganda Village (officially Kijŏng-dong or Peace Village) and the Panmunjom flagpole are visible.

The Propaganda Village consists of white painted house facades and electrical lights on timers and streets that are occasionally cleaned to make it appear that it is actually inhabited.  Reports suggest that even nowadays, electricity in houses in the North Korean countryside, is not a normal.

The Panmunjom flagpole is 525ft (160m) tall and was build by North Korea in response to a 323ft (98m) tall flagpole built by South Korea in Daeseong-dong.  Some people called that the "flagpole war".

We stopped for a half hour at Imjingak Park to look at a bullet ridden train that came under attack during the Korean War as it was transporting war materials to Pyeongyang.  Somebody must have counted the bullet holes and apparently froun 1,020!

Photography was not allowed and I obided by it but there was a guy in front of me who probably took 100 photos during the claustrophobic walk through the tunnel.

I got up early to come to the meeting point for the DMZ tour that I had booked months earlier; advanced reservation is required.  There are multiple tours, I specifically booked the DMZ and JSA (Joint Security Area) Tour as it brings you to the most interesting places.  This tour was a bit of Making Memorable Moments and a bit of deja vu as memories of my childhood, when Eastern and Western Germany were separated, came up in my head a few times.  If you take the tour, remember to bring your passport.  I will be checked on multiple occasions and please be aware that there is a strict dress code for the JSA.

The drive to the DMZ itself was interesting.  Some of it was along different rivers that connect with North Korea.  To keep North Korean military and spies out that have repeatedly infiltrated South Korea in the past, the government has built miles and miles of barbwire fence and military outposts along the river.

Our first stop was at the JSA.  The place with the blue houses where North and South Korean leaders have met in the past and where, normally, armed South and North Korean soldiers suspiciously watch each other from just a few feet apart.

We were told that, for unknown reasons, North Korean soldiers had not been seen there for a few weeks.  Well, a few weeks earlier in a spectacular event a North Korean soldier ran for his life and escaped into South Korea.  He was severely wounded by gun shots from his comrades, but he made it into safety nevertheless.

We were led into the Military Armistice Commission Conference Room which was technically half on South and half on Nort Korean territory.  There is a concrete slab on the ground outside the building that symbolized the border between the 2 countries.  As we were free to walk anywhere inside the building, I guess I can now claim that, technically, I had set foot into North Korea.  I took the photo on the right below, which shows a part of North Korea, while standing on the North Korean side inside the conference room.  Sorry, for the bad photo quality.  The North Koreans did not wash the windows. 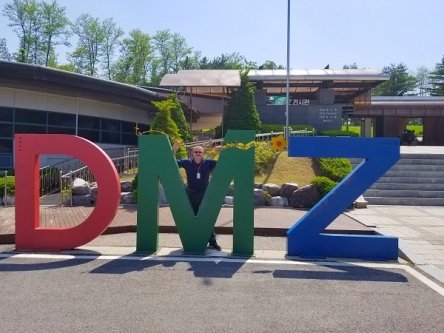 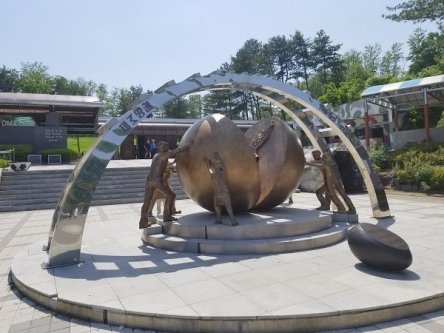 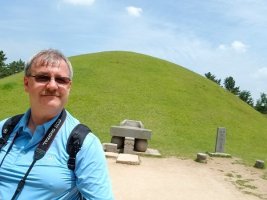 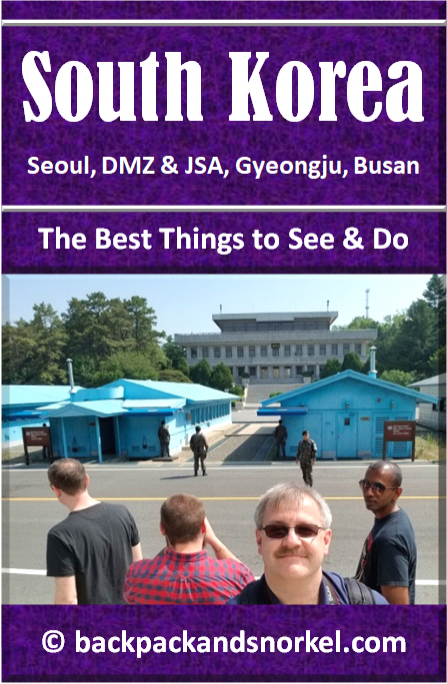 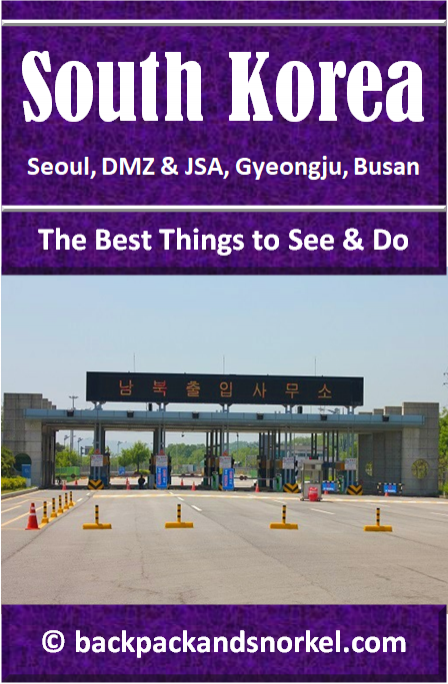 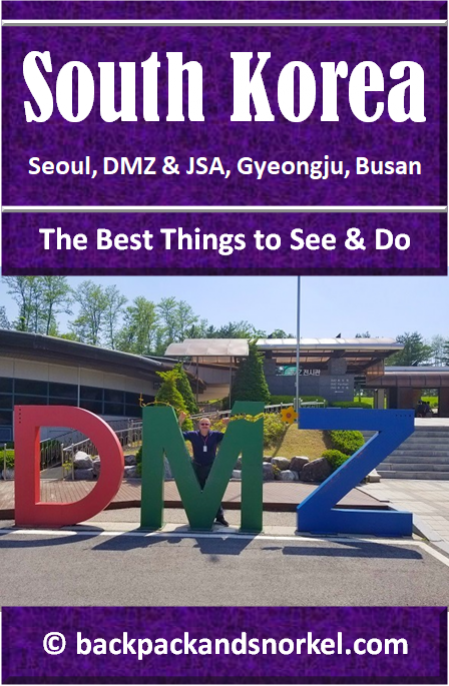 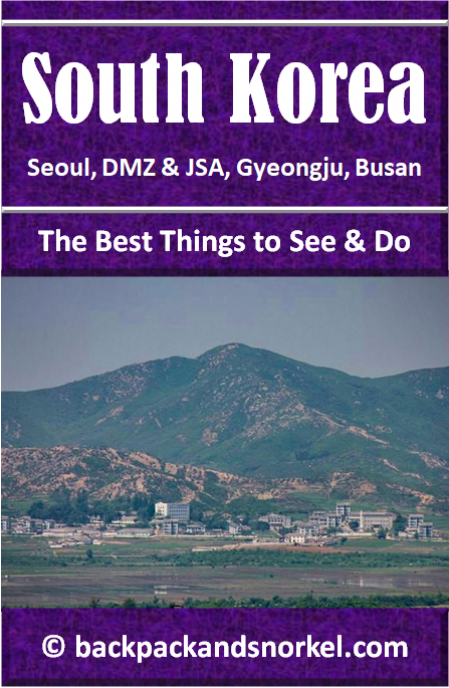