No, the Mexican–American War was not fought here.

The Mexican War Streets, which were originally known as the "Buena Vista Tract", are a mostly residential area with an abundance of beautifully restored row houses, community gardens, and tree-lined streets.

This 25.7 acre historic district in Pittsburgh’s Northside that used to be Allegheny City, until it was annexed by Pittsburgh in 1907, is listed in the National Register of Historic Places since 1975.

The Mexican War Streets area was beginning to be developed in 1847, the time of the Mexican–American War, and many streets here are named after battles and generals of the war.

At the time of development, this area, and Allegheny City in general, was an oasis for wealthy families who lived outside the “hell with the lid taken off” downtown area.

A nice 1 mile walk starts at Randyland at the intersection of Arch St and Jacksonia St.  From here, walk west on Jacksonia St for 0.25 miles until you come to Buena Vista St. 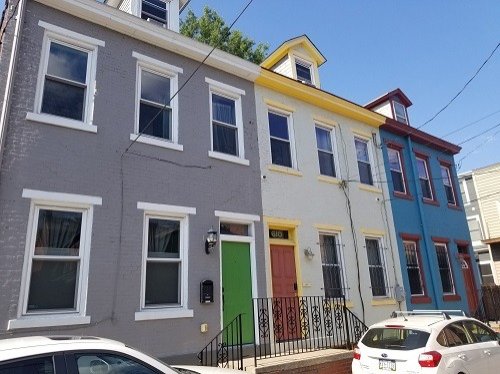 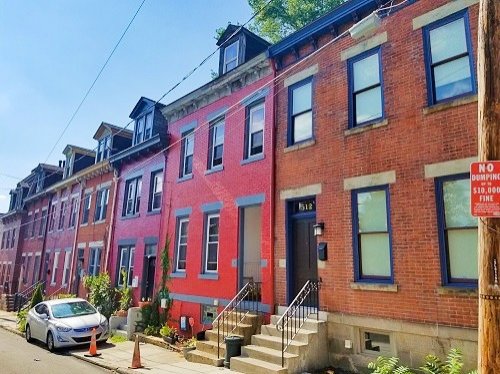 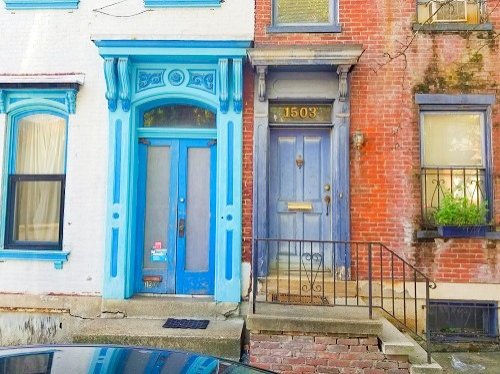 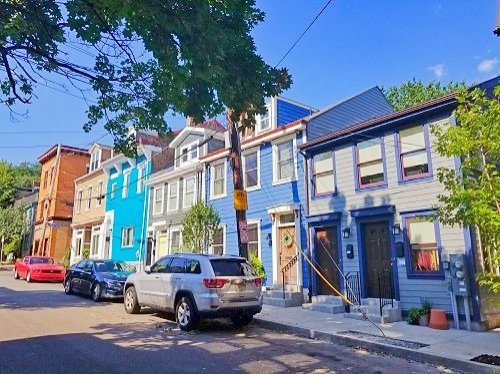 Make a left (south) an Monterey St.  In the middle of the block to your left is a small gated park:

Admission is free and they give you the password which was “412412” at the time we were there.  Relax a little and take a look at the tiles in the floor and their meaning on the wall to the south. Enter your text here 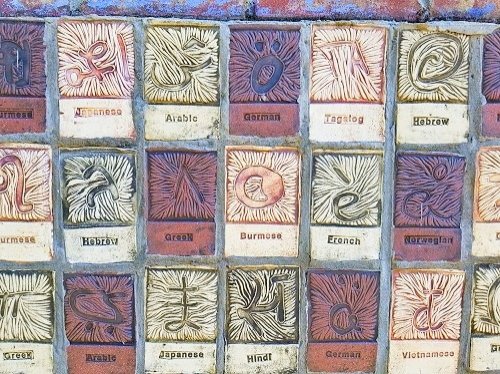 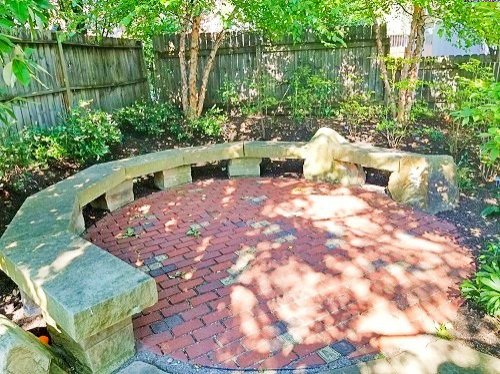 Soon after, you will see a house with a large mural to your left.  To the right of it is a house with brown wooden siding and Chinese written all over.  This is the City of Asylum House Poem and the inscriptions are Chinese Poems and come from Huang Xiang who is seen as one of the greatest Chinese poets in the 20th century; he is also a master calligrapher.  His work is banned in China. 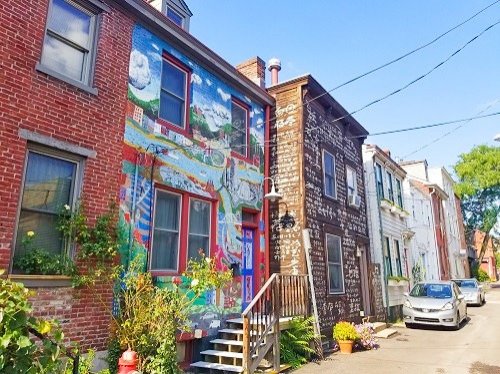 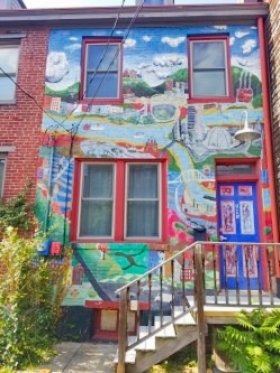 By now, you are probably asking yourself what is the “City of Asylum”.

Established in 2004, the City of Asylum is a nonprofit organization which houses writers that were exiled from their home countries because of their controversial writings.  City of Asylum helps establish a visa and provides free housing, health care and access to social services for up to four years.  As of 2020, the sixths writer is being supported.

As of 2016, City of Asylum is the US headquarters for the International Cities of Refuge Network (ICORN).   Besides the above mentioned services, City of Asylum is also responsible for the Alphabet City venue, Sampsonia Way Magazine, and Pittsburgh’s Jazz Poetry Month.

Huang Xiang was the first exiled writer whom the City of Asylum supported and who lived here from 2004-2006.

Interesting fact: People liked what they saw and were inspired to write their own poems and slip them through the building’s mail slot. 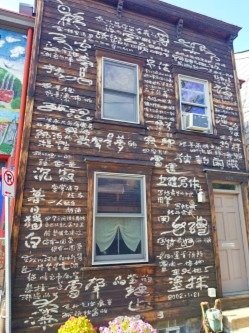 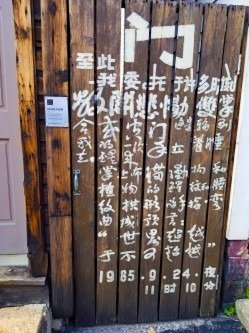 A few feet further down the street you see the Winged House.

The Winged House is the second house that City of Asylum prepared for exiled writers.  It is based on a memoir of Nigerian author, Nobel Prize in Literature winner and co-founder of Cities of Asylum Wole Soyinka: The Man Died.  It describes one of the ways Mr. Soyinka kept his mind sharp while imprisoned in solitary confinement.

Walk a little further and then you come to the:

Khet Mar of Burma lived here from 2006-2009.  She was the third exiled writer in the City of Asylum program.  The mural was painted by her husband and visual artist Than Htay Maung based of a dream she had in which her home in rural Burma and her new home in Pittsburgh merged.  The front façade has a sparkling vision of a heavenly Pittsburgh while the side of the building shows Burmese people trapped in a prison and birds of prey overhead.  The river you see on the side is Burma’s Irrawaddy River and connects seamlessly to Pittsburgh’s Allegheny River painted on the front of the house. 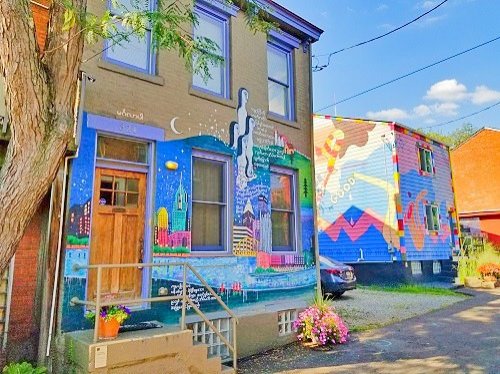 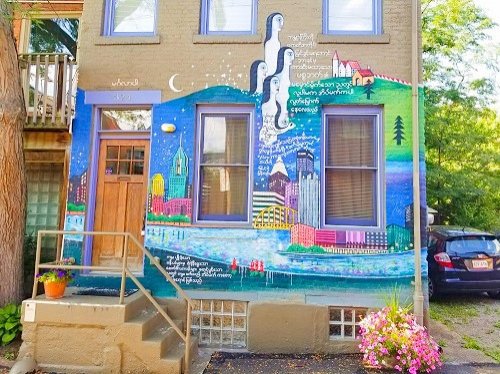 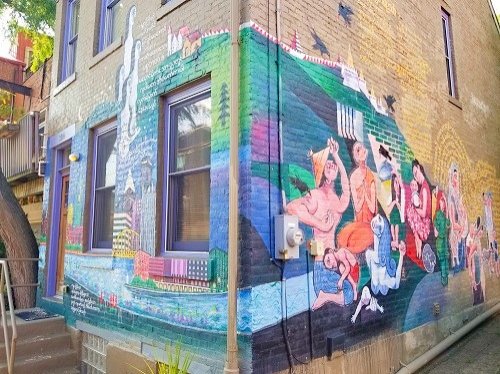 Another beautifully painted house, is the next house:

This mural was created by Than Htay Maung and Oliver Lake, a jazz saxophonist and composer, who organized the first Jazz Poetry Concert with City of Asylum in 2005 and years after.  He has performed at these concerts with different jazz ensembles.

The side of the house facing the Pittsburgh-Burma House shows a safety pin and the words “Just be good”.  The story behind this is: grew up in Marianna, Arkansas and his neighborhood had a strange character who “would walk around in a topcoat and hat, even in the sweltering summer.  He covered his coat in safety pins and whenever he met a child, he could pin a safety pin on their shirt and declare that they are now in the Club”.  When young Oliver received his pin, he asked what he had to do to be in the club and the man replied: “Just be good.” 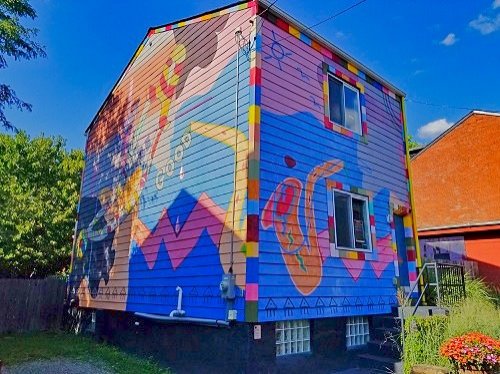 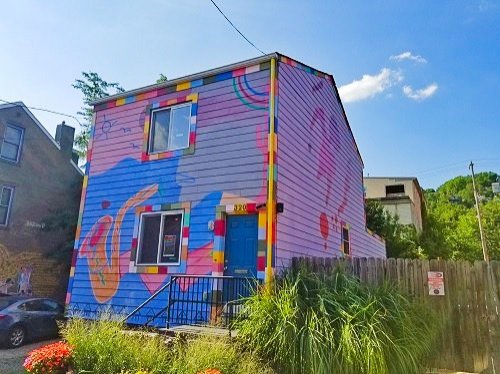 If you continue down the street to Arch St and make a left, then you will see Randyland again where your tour started. 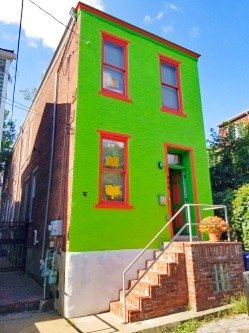 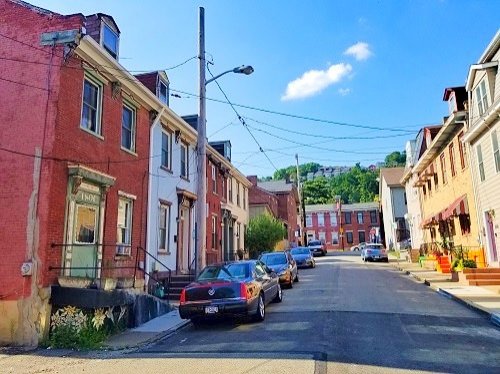 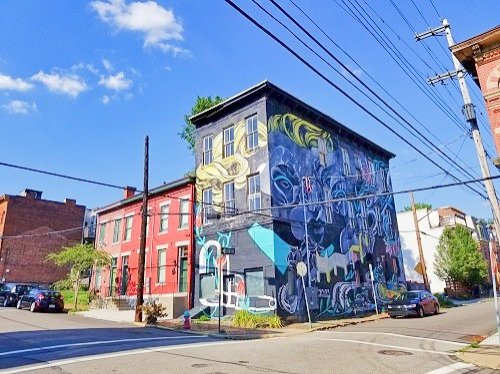 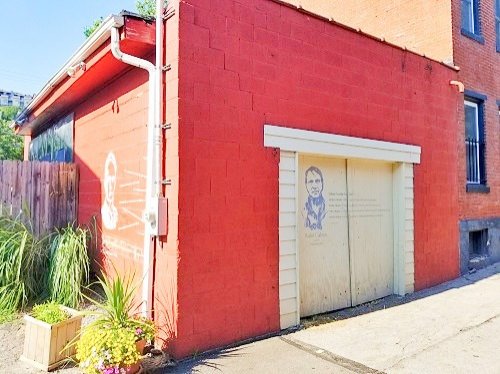