Pittsburgh’s Golden Triangle is very walkable and many attractions are within walking distance from each other.  This self-guided walking tour of Pittsburgh's Golden Triangle covers the highlights in architecture, history and culture.  I have chosen the fountain in Point State Park as the starting and end point as it kind of symbolizes Pittsburgh’s emergence from the “hell with the lid taken off” to a modern metropolis.

Since parking near Point State Park can be a hassle, feel free to start the tour at any point along the route that I describe below.

The Self-Guided Golden Triangle Walking Tour is approx. 6 miles long and will take you all day as it includes several museums.

There are several options to shorten it and I will let you know when this is possible so that you can either drive to some attractions or simply skip them. 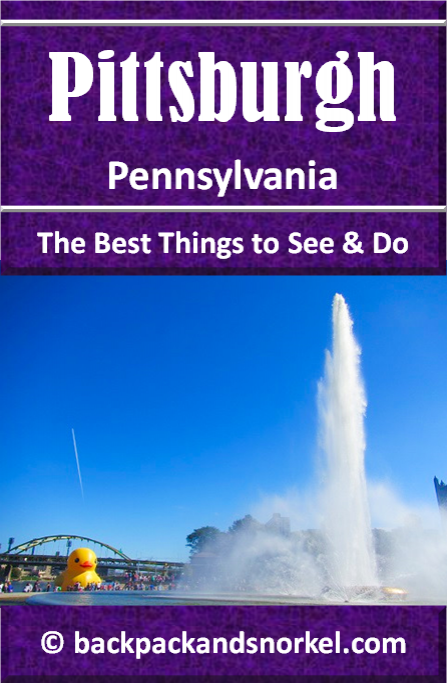 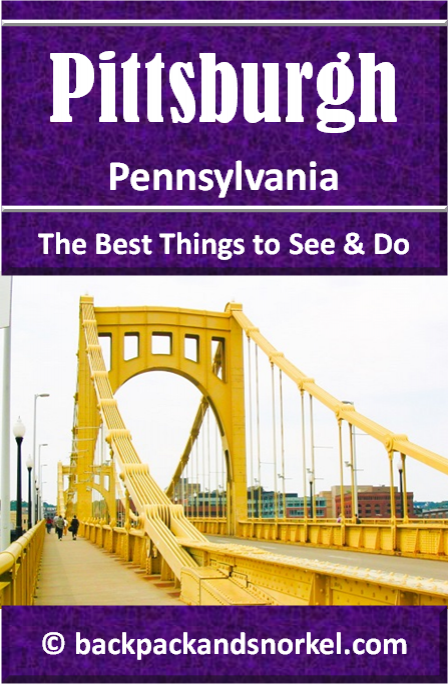 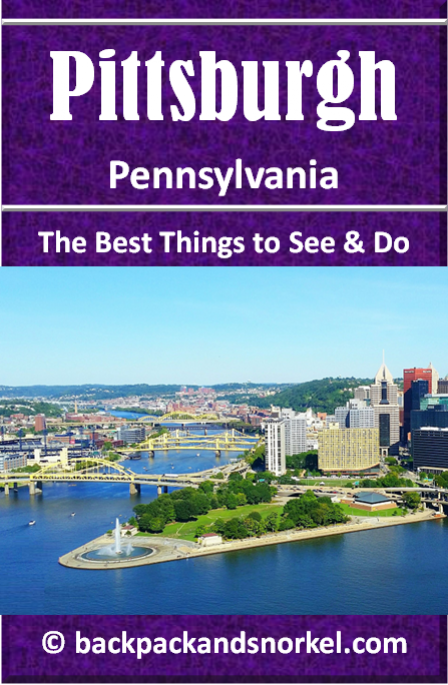 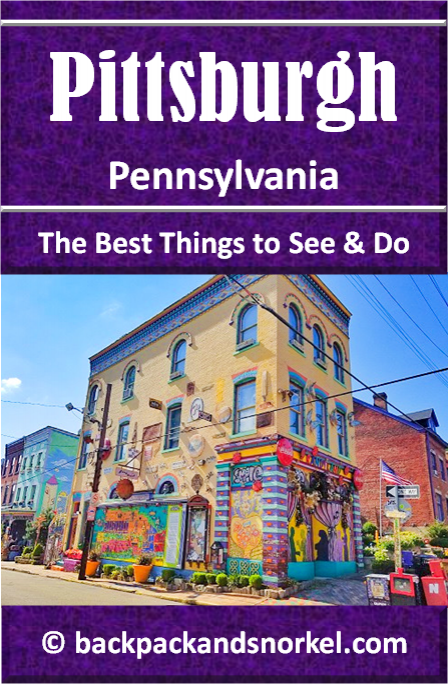 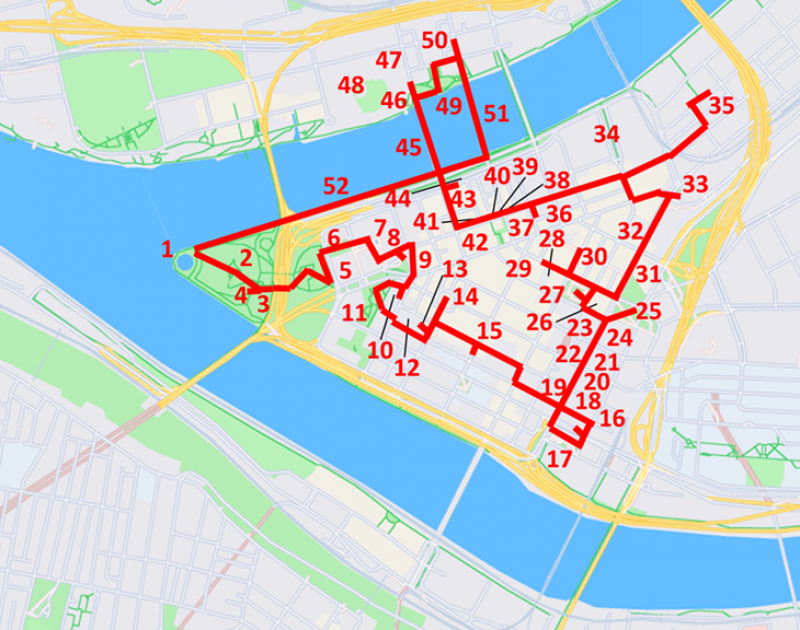 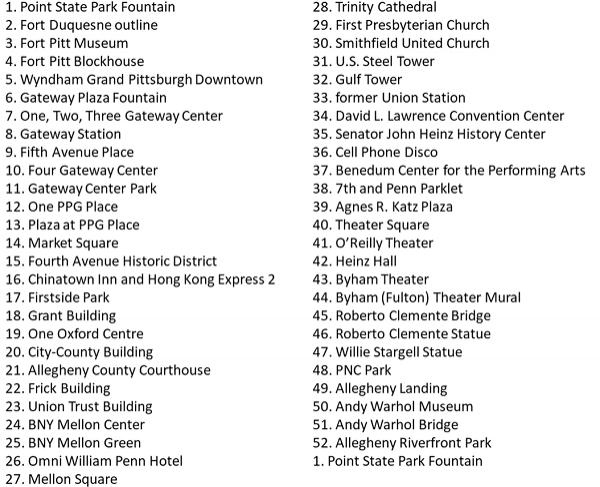 Located at the tip of Pittsburgh’s “Golden Triangle” where the Allegheny River and the Monongahela River form the Ohio River, Point State Park is a 36 acre (150,000m2) park.  It commemorates and preserves the strategic and historic heritage of the area during the French and Indian War (1754-1763).

Formerly covered with warehouses and railroad yards, heavy traffic from the Manchester Bridge (over the Allegheny River) and the Point Bridge (over the Monongahela) met here.  This area fell in decline after World War II and was redeveloped into what you see today.  Point State Park officially opened in 1974 when the construction of the iconic fountain was completed.  The fountain is operated from 7:45am until 10:00pm every day from early May through the end of October.  The system uses a total of 880,000 gallons of water and the pumps push the water up to 150ft in the air.  This is accented by lights inside the 200ft diameter basin.
The fountain is also the western terminus of the Great Allegheny Passage, whose 350 mile trail starts in the Georgetown area of Washington, DC.

More information about Point State park can be found here. 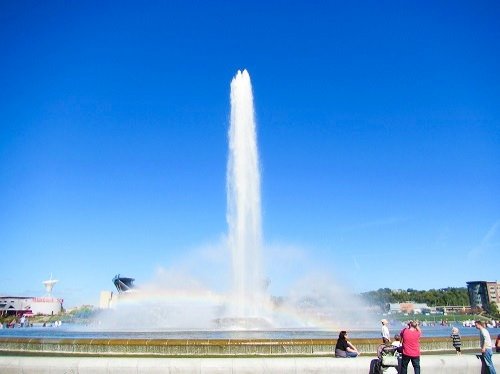 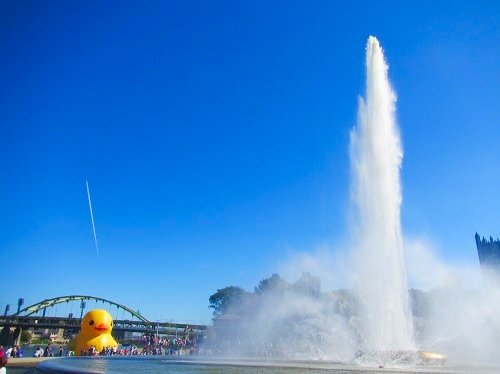 Walk approx. 320 ft from the fountain toward the highway overpass into the center of the grassy area and you will discover brick pavers in the ground.  These pavers depict the outline of Fort Duquesne.  Duquesne is pronounced like Doo-Kane or /duːˈkeɪn/.

This fort was established by the French in 1754 after repelling the English who had started building Fort Prince George in this location only two months earlier.  When challenged by the English, the French were able to hold onto Fort Duquesne, but eventually destroyed it in 1758 when the much larger English army under General Forbes marched towards it in the French and Indian War. 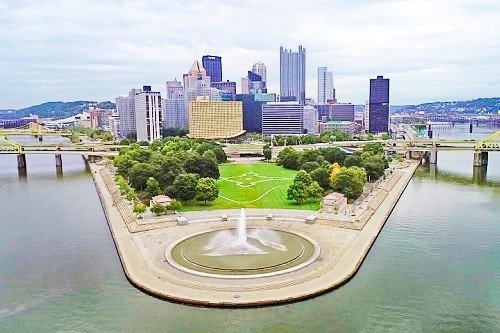 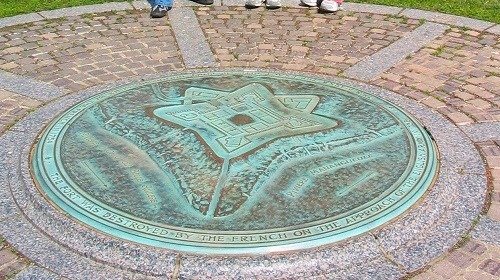 Fort Pitt was built in 1758 by the British after razing Fort Duquesne where you just came from.

Admission to the museum is $8 per person at the time of me writing this.  The museum explains the role that Fort Pitt played during the French and Indian War, the American Revolution, the Whiskey Rebellion and the founding of Pittsburgh. 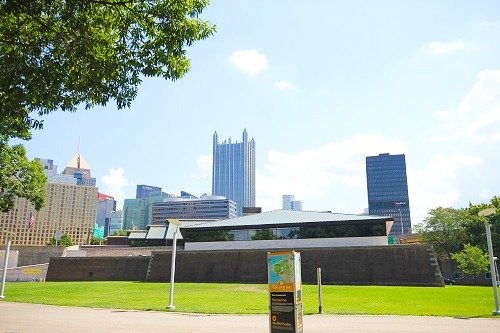 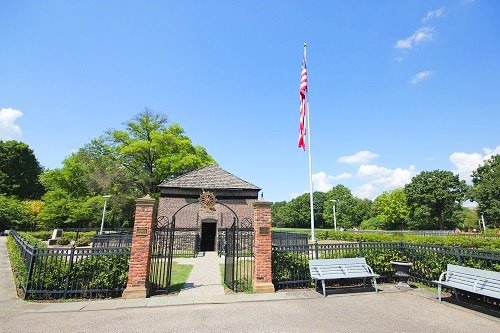 Now walk through the underpass.  On the grassy areas, you will find another set of pavers which represent the outlines of former Fort Pitt (map).  Keep walking towards the massive building in front of you.  This is the Wyndham Grand Pittsburgh Downtown.

Opened in 1959, this building was originally constructed as a Hilton hotel.  Wyndham took over in 2010 after the Hilton filed for Chapter 11, was foreclosed, had failed inspections and Hilton terminated the franchise agreement.

The Wyndham has 712 rooms and that makes is Pittsburgh’s largest hotel.  The floor-to-ceiling windows are said to provide spectacular views of Point State Park and the Three Rivers.

Over the years, this hotel has hosted various presidents, other notable persons and conventions.

The hotel is located on the site of "King's Garden", which was a vegetable garden for soldiers stationed at nearby Fort Pitt. 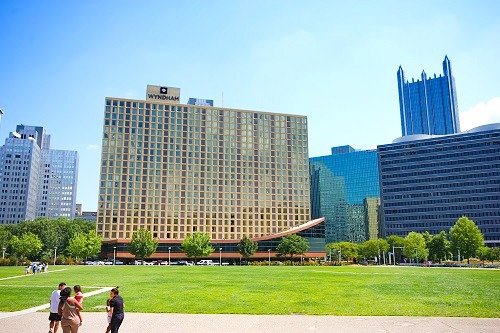 When you stand in front of the Wyndham Grand Pittsburgh Downtown and look towards the building, make a left and walk to the small park, called Commonwealth Place Park (map), directly to the north of the hotel. 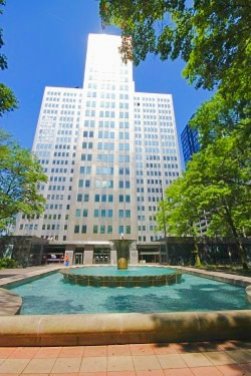 Around the fountain, you see 3 skyscrapers with polished stainless steel facades.  To the north is One Gateway Center, to the south east is Two Gateway Center and Three Gateway Center is to the south west.  The buildings were completed in 1952 and use water from the Allegheny River instead of traditional cooling towers.  The water that is returned to the river is purified and cleaner than the incoming water.

More information about Gateway Center can be found here). 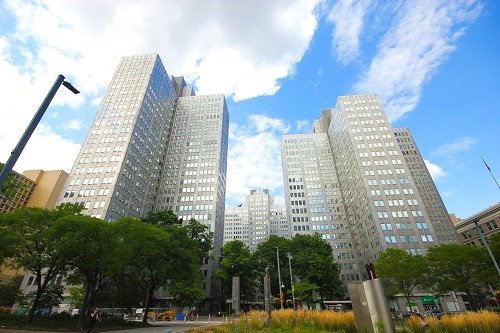 Gateway Station is one of four “T” stations in downtown Pittsburgh.  The “T” is Pittsburgh’s light rail which operates underground as a subway in downtown and above ground south of the Golden Triangle.

The unique glass-and-steel structure station was described as “inventive, daring, and decisively world-class” when it was built.  If you have time, go down into the station to see “Pittsburgh Recollections”, a 60ft x 30ft ceramic-tile mural, behind the train tracks.  No ticket is needed to enter Gateway Station and see the mural. 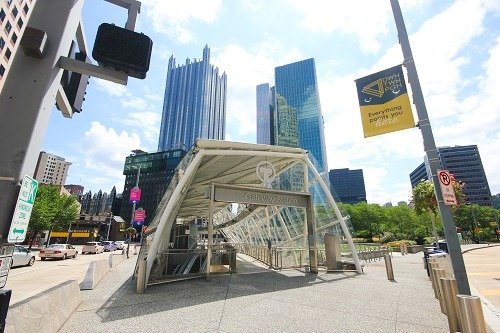 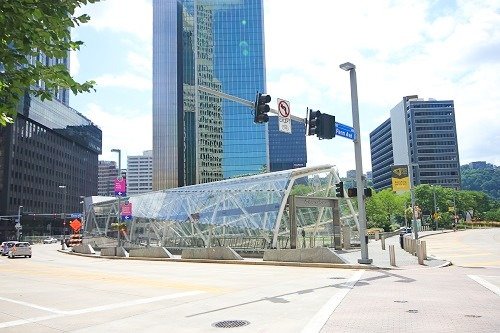 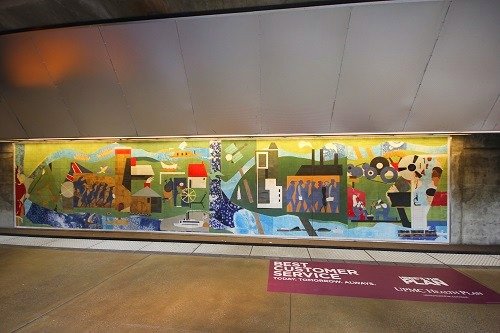 East of Gateway Station stands the skyscraper of Fifth Avenue Place, a distinct looking building that reminds me of a square pink multi-stage rocket.  The building was completed in 1988.  It is 616ft (188m) tall and constructed of a granite frame for the first 450ft (140m), which then turns into a pyramidal roof which is another the 124ft (38m) tall.

Protruding from the pyramidal roof is a 178ft (54m) mast which represents the height that the building was originally designed for.  The city, however, decided that a building this tall would not look well in the existing skyline and restricted the height.  The mast is hollow and has 12 sides, which makes it look round.  The 4ft wide interior has a ladder which allows access to the aircraft warning light on top of the mast.

The pink color of the facade comes from Spanish pink granite that was mined in Porrino, Spain.  The darker colored Taivassalo granite that you can see at the building's entryways and windows was imported from Finland.  The blue-green colored glass was manufactured by PPG and is supposed to look like old-fashioned soda glass bottles.

In the evening, the pyramidal rooftop and office tower walls are illuminated with 64 color changing flood lights that consume more than 44,000 watts of power.

The building has a food court and retail shops, so if you are hungry or in the mood to shop here: enjoy! 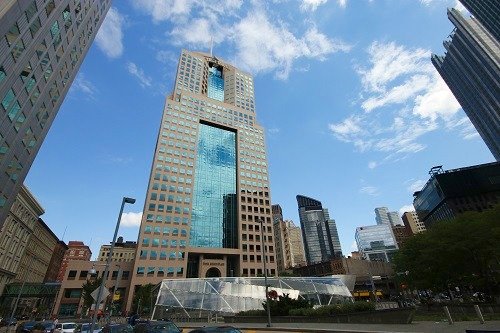 When you get out of the building, turn left and walk towards the McDonalds across Liberty Ave and then cross Forbes Ave to the south and Stanwix St to the west.  This is a busy part of downtown with lots of car and bus traffic, so please be careful. 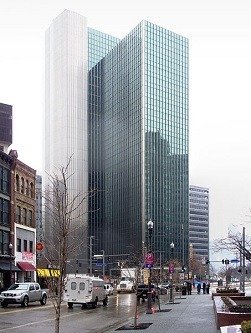 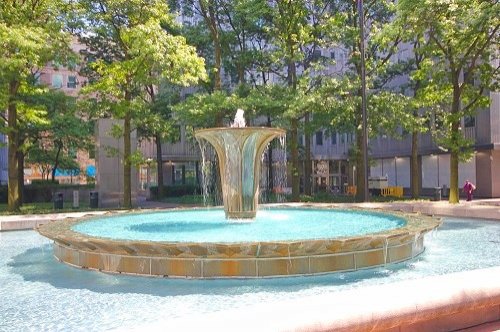 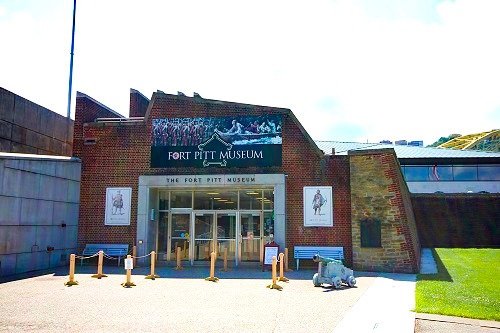 Then make a right and walk through the park and continue on until you come to the Gateway Plaza Fountain in Gateway Plaza.
This plaza with the fountain is actually a large green roof from the parking structure underneath. 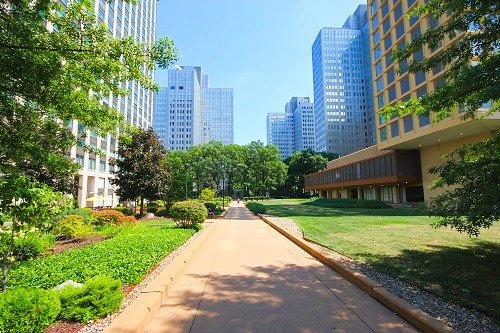