This Backpack and Snorkel Travel Guide (Hangzhou Purple Guide) provides information about the best things to do in Hangzhou and ensures that you will be Making Memorable Moments on a relaxing vacation in Hangzhou.

I went to Hangzhou as a side trip from Shanghai and spent 2 days there.  My goal was to experience the beautiful West Lake (a UNESCO World Heritage Site) and, as a green tea lover, visit the Longjing green tea growing region outside of Hangzhou.

Getting from Shanghai to Hangzhou by train was easy.  My hotel was located close to the Western side of West Lake and as there were no buses that go there, I took a taxi.

A word about taxis in Hangzhou: Trying to hail a taxi on the streets of Hangzhou can be a futile exercise as taxis rarely ever stop to pick up passengers.  This was not just the case for an obvious Western person but also for Chinese.  Ask your hotel to call a taxi.  If you are lucky and a taxi is unloading its passengers, run for your life and grab it before anyone else does.  I was later told that a lot of taxis drive for ridesharing services like uber now and that this would be the best way to get a ride from place A to B.

Leifeng Pagoda is a five story octagonal pagoda which was built in 975 AD on Sunset Hill south of West Lake.  During the Ming dynasty (1368-1644), Japanese pirates attacked Hangzhou and burned it down.  Believing that the bricks from the pagoda can exorcise evil spirits, bless people with many children, and promote the growth of silkworms people kept steeling bricks to grind them into powder.  Finally, on September 25, 1924, the pagoda collapsed and was rebuilt in 2002 after excavating the site where a great number of cultural relics were found. 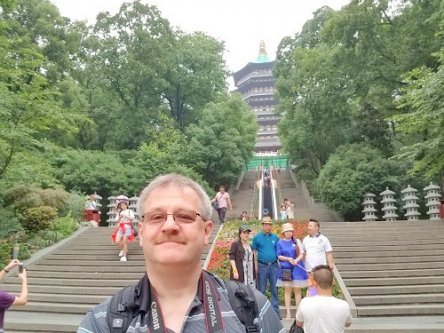 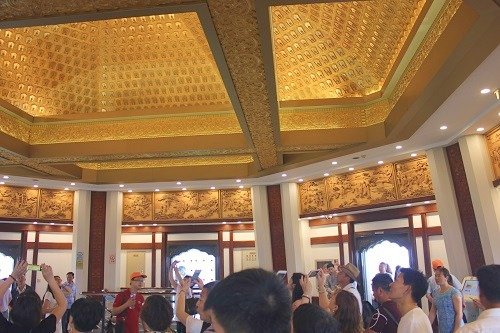 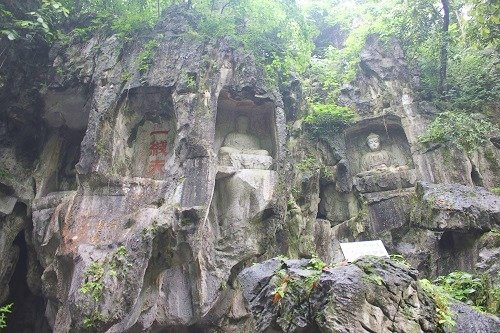 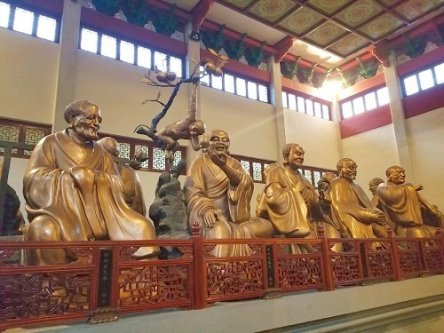 Lingyin Temple or, Temple of the Soul's Retreat, is one of the largest, most famous and wealthiest Buddhist temples in China.  It was founded in 328 AD and at its peak in the 10th century, the temple housed more than 3000 monks.  The temple was rampaged and has been rebuilt 16 times.  During the Cultural Revolution, the temple sustained some damage but was largely spared of serious destruction.

Today, visitors come to see the grottoes with the statues of Buddha and his disciples carved into the cliffs and into excavated caves, several halls with Buddhist statues like the Hall of the Great Hero with the 19m tall statue of Sakyamuni (founder of Buddhism) seated on a lotus flower and the Hall of the Five Hundred Arhats with 500 slightly larger-than-life bronze statues each seated on a unique ornate seat.

Hefang Street dates back to the time in the South Song Dynasty (960–1279) when Hangzhou was the capital and General Zhang Jun began to build his mansion in 1152 around, what was then called Taiping Street.

Today, Hefang Street is a well-known and well-preserved ancient street in Hangzhou.  Here you will find modern stores and restaurants in ancient buildings on a cobblestone street showcasing a variety of Chinese crafts.

Longjing Village – The Tea of the Emperors

Green tea is one of my favorite teas and the LongJing or Dragon Well region outside Hangzhou is the most famous green tea region in China.

Green tea has been grown in this area since the Tang Dynasty (618 – 907AD) and the name was given during the southern Song Dynasty (960 – 1279 AD).  It was the philosopher-poet Emperor Qianlong (1735 – 1796) of the Qing Dynasty who introduced this tea to the rest of the world.  There are different stories about how the Emperor discovered and promoted this tea.

The first version is that he was visiting tea plantations at Lion Peak Mountain and got so interested that he himself started picking tea.  AT that time, he received word that his mother was ill and in his haste to get back to Beijing he placed the leaves he picked in the sleeve of his robe.  At home, his mother smelled the fragrance of the leaves and asked for tea to be made.  She recovered and praised it as a tonic and a cure for all ills.

The second version is that Emperor Qianlong was presented with a cup of Longjing green tea at the Hu Gong Temple at the base of Lion Peak Mountain.  He was immensely impressed and granted special imperial tea status on the 18 tea bushes that grow in front of the temple.  These bushes are still alive and producing tea leaves which are auctioned annually and exceed prices per gram higher than that of gold.

What makes Longjing green tea so special?  The climate, harvesting and roasting.

The Longjing area is mountainous, has a mild climate and rain and fog all year.  The high humidity and the reduced amount of sunlight allow the tea leaves to retain more of its volatile and fragrant ingredients and provide your tea with a mellow and fruity taste.  The tea is harvested in early spring and only young buds are plucked.  The leaves have a jade-green color and the highest quality is picked first, prior to April 5th.  Tea leaves picked afterwards are considered lower grades.  Roasting is another important step in the process.  Longjing tea leaves are roasted early, shortly after picking to stop the natural oxidation process.  The tea contains vitamin C, amino acids, and has one of the highest concentrations of catechins among all teas.  Roasters use bare hands to better experience the heat and understand the development of the tea leaves in the iron pans.

I had a taxi bring me from my hotel to the Longjing Imperial Tea Garden.  It was not very busy when I was there and I think I was only one of a handful of visitors.  Longjing Imperial Tea Garden is beautifully kept up and the personnel in the tasting room allowed me to taste several different tea qualities.  Even though their English was limited, I learned how to recognize a good green tea by looking at it and smelling it.  Unsurprisingly, it turned out that I liked the tea the most that was several hundred US$ per ounce.  Luckily I did my homework and knew not to pay these inflated prices.  After visiting the Longjing Imperial Tea Garden, I walked through the streets and stores and found a street vendor who had the exact same looking and smelling tea for a fraction of the price.  After some negotiating I paid something like 20RMB for a small package of 50 or 100g.  After coming back to the US, I have tasted the tea and it tastes wonderfully! 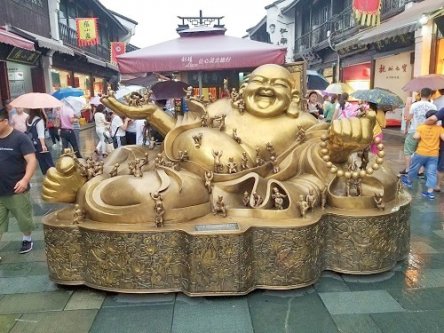 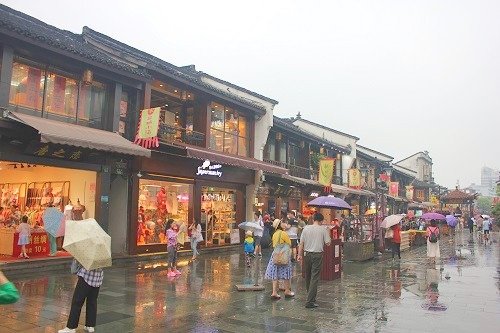 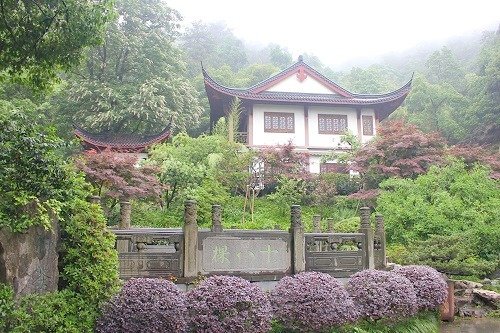 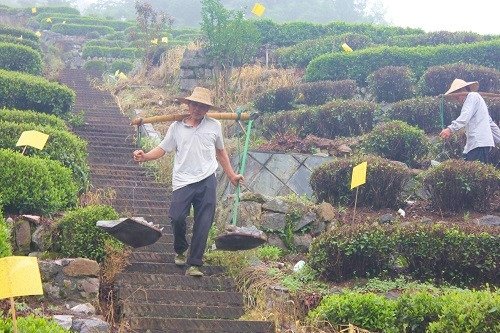 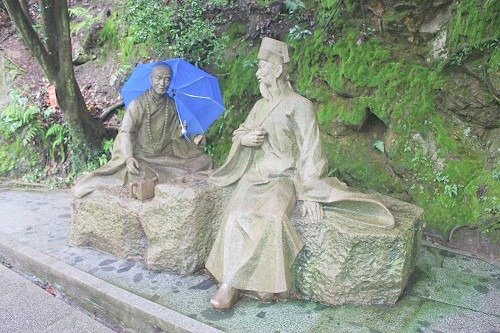 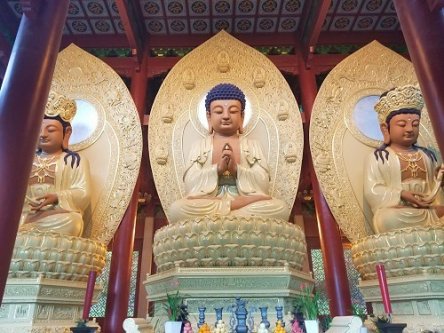 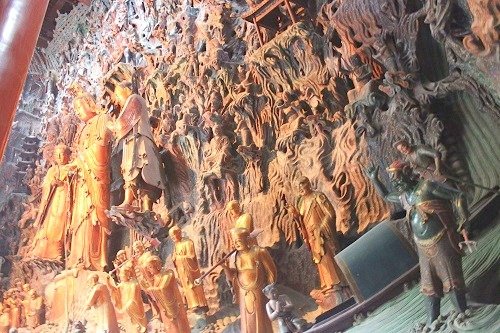 I stayed in this hotel for 2 nights. My room with in a bungalow with one other unit. The room was small but nicely decorated. The king size bed filled almost the entire room. Instead of a coffee machine, they had an electric water pot, porcelain tea cups and supplied lea leaves. There was a wardrobe with a few clothes hangers instead of a closet. The room had a flat screen TV, a quiet and efficient A/C. There was not door or other separation between the sink and the bedroom. The shower (rain shower head) and toilet room (with Japanese style toilet) were closed off the bedroom.
The staff at the reception spoke some English. As no major attractions are in walking distance, they were happy to call taxis. Getting a taxi was no problem for the hotel, but be warned: going back to the hotel can be a problem as taxi drivers in Hangzhou often do not pick up people from the streets. Maybe try Uber.
The furniture showed very few signs of wear.
Breakfast was included in the room rate and served in a separate building in the back of the complex. It consisted of a set meal and a buffet. There were 4 selections for the set meal (3 Chinese noodle soups, 1 sandwich plate) of which 3 were available. The buffet had a small selection of mostly Chinese dishes but bread, butter and strawberry marmalade and water melon and pineapple pieces were available too.
Long story short: If you can accept a small room and are interested in a different type of hotel that is also comparably inexpensive, then this hotel is a good choice. I would that there again.